What actions gain experience for units?

I'd like to try to spread the XP around my group, so that I'm frequently ranking up both my experienced soldiers and my new recruits.

I'm pretty sure that I get XP for killing an alien, but are there other actions I can take during a mission to maximize my XP gain?

For instance, this guy, my newly minted Corporal, Marcel Petit:

He's got a grand total of 1 kill. He's just made Corporal though, so that's 2 ranks in 4 missions with just one kill on record. He's not been stunning aliens either (this is so early in the game I haven't researched Arc Throwers yet). I didn't get him as a quest reward - these four missions are the only ones I've played.

These are what grant you XP and how much:

*Additional XPs earned if the soldier has a rank of Lieutenant or less and kills any of the higher alien ranks (Ethereals, Sectopods, Elite Mutons, Sectoid Commanders, etc.) during the mission.

Your soldiers have different requirements for promotions: 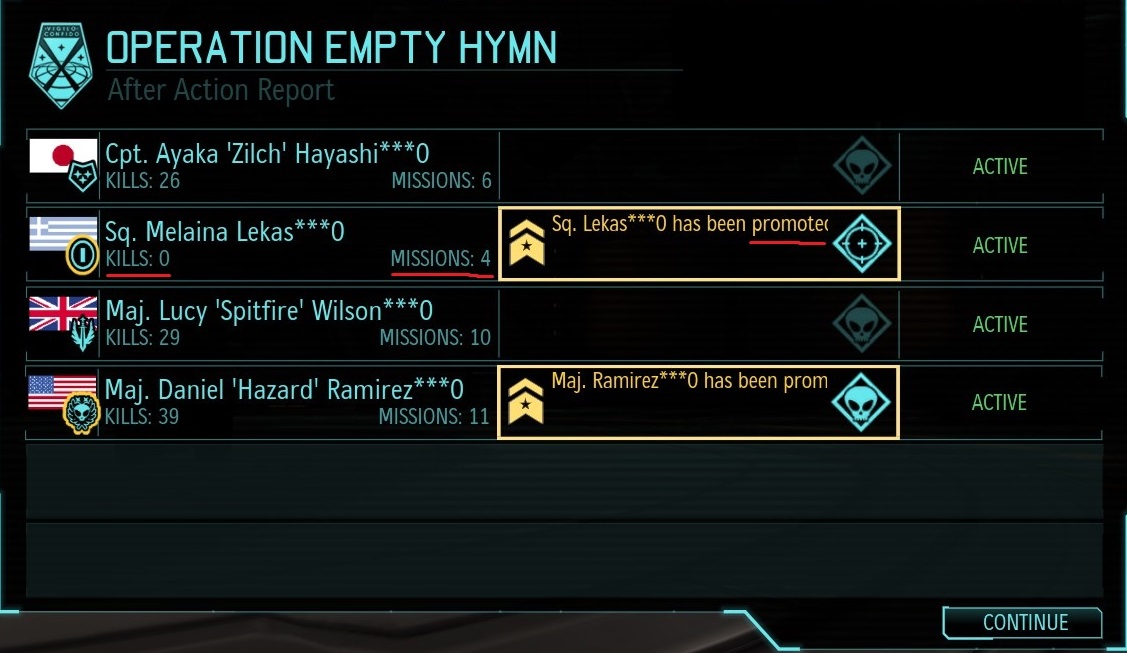 I wanted to let everybody know, you do not have get a kill to level up a soldier!

Melaina did not take any actions during the 4 missions except to hunker down. She did not fire any shots or assist the team in any way.

Also, I'm not sure if capturing aliens will reward the soldier with XP. I'll have check this out later.

Your group gets shared XP, so whatever you kill/capture (as EVERY single mission has you killing everything) every member of your group gets XP - this is great for getting two rookies with a group of veterans and levelling them up.

14
How can I calm panicked units?
18
What (or who) are XCOM Hero units?
10
What bonuses do you receive for being elevated?
10
When do my soldiers gain ranks?
6
How badly does 'Hunker Down' limit my units sight?
5
What do I lose for losing a country?
19
What do distance units mean?
9
What is a units sight range in tiles?
4
Which actions will cancel One For All? Which won't?
3
Is there any penalty for using explosives against EXALT units?