Deciding which items to buy based on champion's stats

Let's use an example: 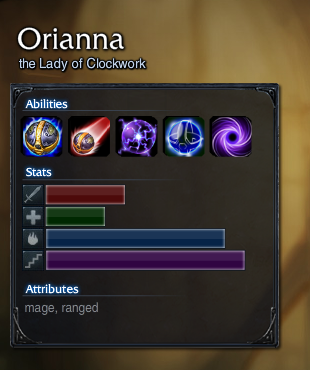 Orianna has high Magic and Difficulty, then defense and the lowest is damage. Which items should I buy for her based on her stats? Should I focus on the high ones or the low ones?

But this isn't the better answer, since in league of legends everything is situational. There are several aspects to consider when choosing what item to get:

Read the skills definition of the champion and pay attention for the attributes that most benefits them. Some skills scales with your AD, other with your AP, and some others scales even with your maximum health or your movement speed. Try to get some itens to improve your skills.

Your role in the team

You should always consider the enemy team composition when choosing your itens. If you are facing a team that have a lot of AD champions, geting a frozen heart may be a good choise. Or if you are having problems with a powerful Malzahar, having a QSS may save your life.

In general, a mix between these aspects can give you a right direction when choosing what itens to buy. With some experience this will be a easy task. There are always some sites that can help you with your build, like mobafire.

But remember to always feel free to try new itens combinations, and have fun!

Item build is not just based on stats, but also takes into account the champion's skills (and their scaling) as well as playstyle that you plan to use with them. Often, there are champions who have completely different viable builds (e.g. AD & AP Yi/Kennen/Trist).

If you don't know what is ADC, APC, tank etc.; then don't try to decide item purchase on the fly - go to SoloMid or MobaFire, find a guide and follow its suggestions. Unfortunately I can't advise using the 'recommended items' since some of those are really out of date, I hope that Riot will update them for Season 3.

You must be aware of what the different items offer and your champion's skills, scaling ratios etc. before attempting to create your own purchase order.

There are a lot of factors that affect item builds, I will just discuss some of them. This should get you started thinking of how to use items to synergize with a particular kit.

Utility skills: Some mages such as Lux, Morgana etc. bring a lot of CC to their team, and more than raw damage its important to have those be more spammable. In such a case, CDR becomes important.

Burst & magic damage: Most champions with a strong burst (ie. they unload multiple skills to quickly damage enemies) tend to have AP scaling and benefit from Rabadon's Deathcap, RoA etc.

ADCs: Most carries do their damage on normal AAs (auto attacks), which are stronger by using AD items as well as attacking faster. Hence, you should aim for a balance of attack damage (BT, IE etc.) and speed (PD, Madred's).

AD Burst: Champions like Riven who like to do bursty damage but with AD, and scale very heavily with AD (her shield is the only one that scales with AD not AP). Thus, build like an ADC but with AD focus and little/no AS.

AD/AS balance: Does your champion have a strong AS steroid (Trist)? Focus more on AD instead. Or if they have an AD steroid, then focus on more AS.

On-hit damage: All of the on-hit items (Wits' End, Malady) do magic damage, and scale directly with number of hits (ie. AS). Thus, any on-hit build will heavily invest in AS.

On-hit skills: Which champions would benefit most from an AS build? Those that have skills that do fixed damage (or heal) per hit, such as Teemo, Irelia, Fiora, Warwick etc.

A champions stats should not determine what items you buy, rather how you play the champion should. For example Lux has very low attack damage but can make a fun (and rather trolly) AD (attack damage) carry if built correctly.

If you plan on being an AD carry you need AD and AS.

If you plan on being an AP carry you need AP and mana.

As a support you need GP5 and wards. With aura items to help your team.

As a tank you need GP5 and health/MR/AR depending on the situation.

In all of these builds buying at least a little survivability will help a lot. There are lots of builds out there. Find what you like to play and build towards that.

I realized I did not speak about orianna, which was your original question. Here is a link to solo mid which has some helpful guides for people learning how to play champions.

6
When a rune or item says +x magic penetration, how is that calculated?
33
How can the damage reduction from Armor in League of Legends not have diminishing returns?
1
Will AP items and runes help auto-attack heavy champions?
4
Is it better to save for expensive items or buy/sell cheaper items?
5
Learning how to buy Runes
5
Can an allied Elise steal Orianna's Ball?
2
What items to buy to enhance Nidalee's tankiness after the last “balance” patch?
2
Is true damage listed as magic damage in the statistics?
3
late game mages