Lately, I have been seeing in Professional games and streams that Zerg players when in a ZvZ mid game battle where they have mainly roaches and infestors vs the mirror composition, they sometimes use fungles and other times spawn infested terrans. Whenever I play I typically randomly choose between the two. When a Bronze league friend of mine asked the other day, I was dumbfounded on what to tell him. Logically I always spawn infested terrans when I don't have enough energy left to Fungle. But pro games tend to not only spawn them when out of fungles. How should I differentiate when to use fungles vs terrans, etc. 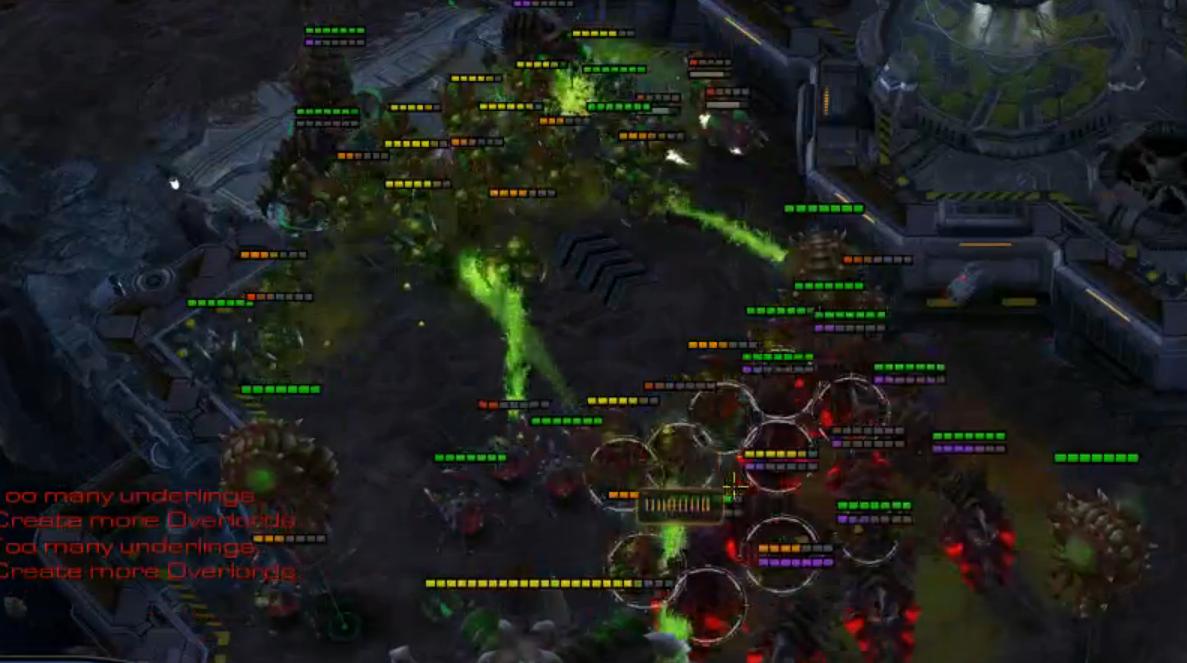 The decision is based upon how many roaches you have versus how many roaches they have and if you have to engage them in a battle right at that moment. In this type of mirror match you always want to try to catch them not watching or when you have an advantage.

Lets take a look at the two abilities.

Fungal growth: AOE damage, 30 (40 to armored) over 4 seconds. Casted by the player. Holds the affected targets in place.

Spawn Infested Terran: Eggs that take 5 seconds to hatch, have a 100 health. Hatched Infested Terran has 50 health, lives for 30 seconds and does 8 base damage per attack.

At a quick look the Fungal does more damage straight up. But there are hidden bonuses that casting Infested Terran has. For starters their eggs soak up a lot of extra damage. At 100 health, that's 100 damage that your roaches are not taking. And they also spit out a little damage back, and in large number do significant damage, especially if they are upgraded. But mainly Infested terrans are there for soaking up damage in the scenario of this question.

If you have more roaches, you always want to use fungals over infested marines. You want to hold his army in place so that you can destroy it while keeping your army. If you have a lot of energy throw in infested terrans too so they can soak up damage as mentioned before. The less damage your roaches take, the better. You want to save energy for more fungals for the next engagement so you don't want to spend all your energy on spawning infested terrans in your fight (unless it's the killing blow, or it's going to be really close battle).

If you don't have enough energy to fungal and you see that they have more roaches and a few infestors, run. It's the exact opposite of the situation above and your army will be held in place and decimated. Their fungals will hold you in place and your infested terrans won't do anything against their army. You want to reinforce your army and try to take them on when you can fungal as well. Otherwise you are engaging at a DPS disadvantage.

Long story short, you always want to save your energy for Fungal growth because it does more damage. When Roaches are clumped up, you can catch somewhere around 7 to 8 roaches. At 7 roaches, that's 280 damage for one cast costing 75 energy. Even when they are spread out in the arc of roaches vs roaches you will catch at least 4 per cast, that's still 160 damage done by fungal. By comparison a single infested terran egg for 50 energy will be killed off by those 4 or 7 roaches before they even hatch. So if you don't have enough energy for a fungal, run away until you do because that much damage during a battle makes a really significant difference in the outcome. You may be choosing to lose a base at this point, but it's definitely worth losing 300 minerals than losing your whole army.

Not the answer you're looking for? Browse other questions tagged starcraft-2 starcraft-zerg or ask your own question.

5
Does the corruption ability of Corrupters stack?
11
What attack upgrade do banelings use?
39
How do I counter the 7 roach rush build?
14
Starcraft 2: Why use Roach over Hydra?
7
What units is it viable to use the Corruption ability against?
1
What is a “channeled ability”?
11
How to maximize Zergling/Roach army by the 12-minute-mark?
3
How to micro infestors most effectively
3
What is a solid build order for use in ZvZ?
6
In the roach evolution mission what do the multicolored crystals paired with the units Maye, Oynx, and Diamond reference?