Can I get the “Saints Flow” effect outside of the DLC mission it appears in?

I recently finished The Trouble With Clones and I really enjoyed the sequences that involved the Saints Flow effect - throwing fireballs and running faster than cars was a lot of fun. I'd like to be able to use this elsewhere, or just go on a non-mission-related rampage.

I can't find Saints Flow in my inventory or in my crib storage or anything similar to that. Is there any way to play with this ability outside of the related DLC mission?

Unfortunately, no, there is no way to use the (awesome) powers that the Saints Flow drink gives you during The Trouble With Clones. The Saints Flow effect isn't granted through a specific power-up or anything, it's just an effect turned on for the duration of the "Send in the Clones" mission of the DLC. However, it is replayable, so you can replay the last mission if you go through it again.

If you're playing on the PC, you can install the Sandbox+ mod, which allows toggling of the Saints Flow superpowers (among other features) in the open world, even outside of the mission it originally appeared in. You can even use it while doing activities. In some of the screenshots below, I was able to use the Saints Flow super powers while doing a Survival diversion. 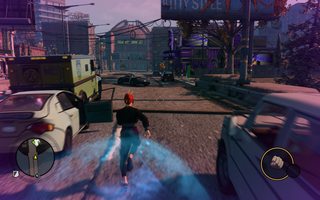 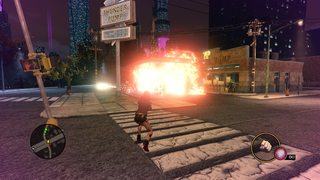 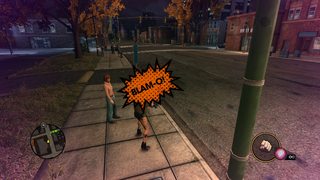 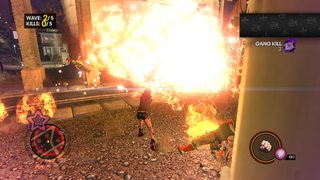 The keys that toggle the Saints Flow superpowers with Sandbox+ are CTRL + Insert.

you can get the powers if you try to jump of a really tall buliding without using your parachute and land on a car there's a glitch then suddenely there's fireballs in your inventory.

Not the answer you're looking for? Browse other questions tagged saints-row-the-third or ask your own question.

10
How do I get the Condor VTOL out of the park for the related vehicle delivery mission?
2
Can you play Saint's Row 3 DLC co-op when only one of us bought the DLC?
7
Saints Row the Third DLC WARNING
2
Can Saints Row: The Third cheats be saved across gameplays?
5
What are the exact requirements for the 'Perform a near crash' objective in the 'That's Not in the Script!' Gangstas in Space DLC mission?
2
Once I complete Saints Row: The Third campaign, can I choose the other option for Three Way and still keep my items from the first time playing it?
0
What DLC includes the online pass in Saints Row The Third