How to counter a proxy zealot rush on Blistering Sands

I'm recently doing a lot of rushes, and I found that the outcome is very map-dependent.

On a map like Blistering Sands, where I know my opponent's location and he has a backdoor, how would you defend an opponent's zealot rush?

I usually set up 3 gateways in a spot near his base, that is unseen by the watch tower. The probe that builds these gateways is sent to scout, and if his main entrance is well defended I hurry up to the back door. Even if he scouts there, it's usually too late.

So the back door on Blistering Sands is actually covered by rocks. Since the Destructible Rocks have 2000 hit points, 3 armor and are Armored its actually very hard to get a rush in that direction.

Now if you're getting through this back door and he's not noticing the problem here is that he's not doing a good job of scouting. In the case of maps with this kind of back door you can usually accomplish this kind of scouting by placing a Pylon, Supply Depot or Overlord right next to them. If you see your opponent making a move against your back door you should be able to produce enough troops in time to mount a good defense.

In the case of a Zealot rush, you should be able to get some basic ranged to harass them while they try to break through the rocks. Alternately you could add on buildings (or even cannons) to make it really hard to get through. Controlling your Back Door is almost as important as controlling The Sweet Spot.

Many people attack this back door early to mid game to open up what's often known as the sweet spot. 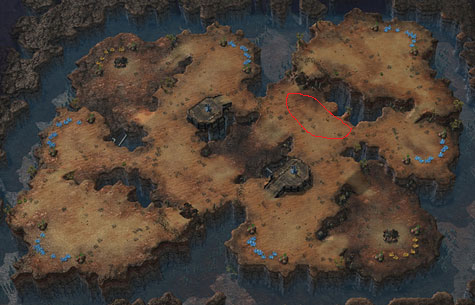 You see that area between the Back Door and the Natural Expansion? This area has a smaller route than its equivalent on the inside of the base. As a result you can quickly move back and forth before his army is able to respond.

To deal with the Sweet Spot in the early to mid game its often necessary to have your forces rally to it. By controlling the Sweet Spot you are able to prevent adversaries from abusing it against you.

Playing as Protoss - When I scout a Proxy on any map I tend to immediately drop another gateway and a forge as soon as I can. My scouting probe hangs out near the opponent's nexus and sets up a pylon. Meanwhile in my base I am building Zealots and cannons to defend. When I get the opportunity I build a cannon in the opponent's main. This last thing tends to win me the game.

On Blistering Sands, maybe maps in general, people focus too much on the "one" door into their base and set up a "Maginot Line". This means that when you enter the base from the rocks side all of their units and defenses will be out of position. The better response is to build things closer to your base and build your cannons/bunkers/spines in places that will defend the most structures and units. Another thing to remember is that any building (other than a pylon that you want to keep alive) can act as a defensive structure against zealots and prevent them from gaining free reign of your base.

You also want to keep the pressure on the proxying player's base. If they are building a pylon or 2 and 2-3 gateways outside of their main they are going to have a hell of a time defending their probes. I find cannons to be very useful here as my scouting probe tends not to die and the enemy probes responding to the cannon are going to pull minerals away from the attacking army.

Against an opponent that scouts well you should never be able to get 3 gateways up before it's spotted. If I scout your base and you have few or no buildings there I start looking for proxy's.

At the same time I also start more unit focus instead of economy focus, and depending on how early I find the proxy (is it still building or is it done and pumping out units) I'll either try to destroy it before units come out, or try to get a bigger army and then kill it. When proxying you are going to be about 15-30 seconds behind in production to get your probe up there, and if I see it early enough, or I was already doing an aggressive build I will have a slightly bigger army than you (assuming our macro abilities are on about the same level)

Also as Protoss I've started not walling off (except sometimes vs zerg). The advantage of building near the nexus is a shorter probe travel distance (I can start a building then go back to mining very quickly) and also like you mention if there's a back door I don't have to worry about defending 2 places, either workers or my other buildings, they're all together.

Not the answer you're looking for? Browse other questions tagged starcraft-2 starcraft-protoss or ask your own question.

7
Can you find a replay that defends against a well executed proxy rush on Blistering Sands?
2
When not to zealot rush?

6
How do I counter a zergling rush?
15
How do I effectively counter a cannon rush with Zerg?
10
How do I counter a Zealot Rush (as any race)?
2
When not to zealot rush?
7
Can you find a replay that defends against a well executed proxy rush on Blistering Sands?
39
How do I counter the 7 roach rush build?
5
ZvZ, how do I defend against 6-pool with a Spine Crawler?
13
How to counter marine rush as a protoss on maps with huge ramps like Scrap Station?
8
Counter Dark Templar rush in 2v2 as zerg/protoss
1
Starcraft 2: Defending against proxy 2-rax (and early aggression in general) as Terran