What is the difference between “Active” and “Wait” combat modes?

I've picked up Chrono-Trigger for the DS recently, and I have to say I am really enjoying it so far.

The only thing I am not entirely comfortable with is the real-time combat system. While I appreciate the added challenge and increased "realism", it's sometimes frustrating, especially when you are fighting three X monsters and it takes you time to figure out which of the three X buttons that show up when you try to attack is mapped to the X monster on the far left.

The game's option page allows you to switch from this "Active" combat mode to the "Wait" mode, which according to its description seemed like it should make combat become completely, or at least mostly, turn based. In practice, I see no difference whatsoever when switching between the two modes.

So my question is twofold:

In Wait mode if you're in a command menu (i.e. choosing an item or tech to use) time effectively stops. In active mode, Active Time Battle bar is always going; that's the one that fills up and your character can act when it's full. This includes yours and the enemy's which you can't see.

When you're just in the main combat screen and not in a particular menu there is no difference.

Once you learn dual-techs you might actually prefer Active mode, because in Wait mode you would have to sit in the main screen waiting for both characters to be ready to act, whereas in Active mode you can just select the tech while waiting and then just choose it.

That's actually one of the reasons that Wait mode doesn't make it completely "turn-based" the way you expect it to. You sometimes need to wait till 2 characters are ready to act simultaneously and if time stopped when it was 1 character's turn, you wouldn't be able to do so.

Davye's answer was correct in describing how, in "Wait" mode, the enemy's timer and your own party's timers will all stop and the bale will be paused when you enter the tech/item menus. I wanted to address #2

Is there some sort of trick for successfully switching to "Wait" mode?

You are asked prominently at the beginning of the game which to use, but the setting can be changed from within the settings menu, the same place where you configure controls, color schemes, and cursor memory. 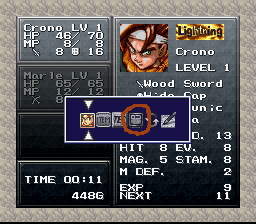 You may also want to real the Wikipedia article on Chrono Trigger although it may contain spoilers! Specifically this is the part that talks about Active Mode:

Chrono Trigger uses an Active Time Battle system—a staple of Square's Final Fantasy game series designed by Hiroyuki Ito for Final Fantasy IV—named "Active Time Battle 2.0."[12] Each character can take action in battle once a personal timer dependent on the character's speed statistic counts to zero. Magic and special physical techniques are handled through a system called "Techs." Techs deplete a character's magic points (a numerical meter like hit points), and often have special areas of effect; some spells damage huddled monsters, while others can harm enemies spread in a line. Enemies often change positions during battle, creating opportunities for tactical Tech use. A unique feature of Chrono Trigger's Tech system is that numerous cooperative techniques exist.[11] Each character receives eight personal Techs which can be used in conjunction with others' to create Double and Triple Techs for greater effect. For instance, Crono's sword-spinning Cyclone Tech can be combined with Lucca's Flame Toss to create Flame Whirl. When characters with compatible Techs have enough magic points available to perform their techniques, the game automatically displays the combo as an option.

Not the answer you're looking for? Browse other questions tagged chrono-trigger or ask your own question.

2
I've rescued the Queen from the Cathedral. Now what?