How do the Ents spawn and what's the best way to deal with them?

Sometimes, when chopping down trees, an Ent can be generated. (look at the picture below for reference) 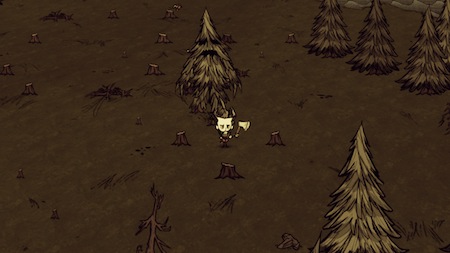 These guys are pretty hard to kill, destroy you in a couple of hits and tirelessly follow you around the map.

Whenever you cut down a tree there is a small chance (larger at night) that a nearby tree will turn into one of these, some call them an "Optimus Pine".

Also, burning trees down will increase the chance of waking it up.

There are several popular strategies to deal with them:

I have only killed one once, and if I recall correctly it dropped logs and pine cones. It didn't drop anything special.

I just killed two. I woke them up in the morning and was surprised when two of them came at me (as I thought you were only in danger of them spawning during evening and night). I've never previously survived against even one of them, since they were most common way in which I have died.

What I did was get away from my base. I torched a tree to ignite it and kept on running through the woods, as the other trees caught on, which in turn reignited the Ents. They then, very quickly turned to ash and monster meat, along with the whole forest, but I didn't like it anyway.

Dont kill it with fire with the new updates. If you do you will get your Monster Meat but no Living Logs. They will turn to ash. I learned this the hard/easy way. I was just playing one day and I needed some Logs for my Fire Pit. (Played at Willow) And i go and chopped a tree down and Boom. The Optimuse Pine came out and chased me around while I ignited it with Willows Lighter. After about 8-10 times of Igniting it, it died. I didn't know at the time that they were the only thing that dropped Living Logs and when it dropped Ashes i said "Well, that escalated quickly." and went on with my 10 Day life.

Fighting the Optimus Prime head on is another maybe risky option. But if you have the right timing you can kill one without taking any hits. Because the Pine attacks so slowly you can get 3 attacks in, move away to avoid his attack, go back in and attack 3 times, etc. Without too much difficulty. Having a spear to do this would help a lot since the Tree has a lot of health.

Besides an obvious connection between the number of trees cut down and the likelyhood of an ent spawning I am not entirely sure what it is that causes them to awaken but there are a number of easy ways we have learned to deal with them in the past. Tree-guards are scary but after the initial phobia caused by your first encounter you do begin to realise they are not really up there in terms of major scariez. My advice: lead them into a swamp/pig village or set them on fire (easier but not as effective and you have to be careful of your berry or grass farms) but the easiest way is probably just to lead them away from your base then outrun them and they should forget about you and not bother you unless you attack them again or hack down trees directly under their noses.

P.S. In our version (dec 2013) they drop 6xLiving Wood and a monster meat so its often a good idea not to burn or ignore them.

P.P.S A base with a patroling Optimus Pine should not be abandoned

Not the answer you're looking for? Browse other questions tagged dont-starve or ask your own question.

5
Does Deerclops spawn every winter, and how does he behave?
7
Is there any use for live fish, and how can you keep them alive?
7
How do I deal with poison in Shipwrecked?