Gate to allow only one player to pass through

On my server I have a quiz which you need to take before you can go to most of the areas, build etc... However, sometimes people try to cheat by going with friends into there. I want some kind of gate/mechanism which only allows one player to pass through and insert some kind of delay or so after this. Is this possible? For the delay I know how to make it, I only need to know if you can build something where only one person can pass through, not multiple at once.

I think the answer from MBraedley is correct: the best way to handle this scenario (allowing access to a single player at a time) would be to use Command Blocks to teleport one player into and out of your quiz area. You can program a Command Block to teleport the nearest player to a set of coordinates like so:

I don't know what would happen if two players somehow managed to be the exact same distance from the command block (i.e. does just one get teleported, or do they both get teleported since there is a tie for the "closest"). This additional argument may be necessary to limit it to only one player:

The next step is to create a circuit whereby clicking an "entry" button will teleport one player into the quiz area, deactivating this button so that it cannot teleport anyone else in until the player exits the quiz area by clicking a second "exit" button, teleporting them out. Here's one such example circuit I just threw together in my survival game: 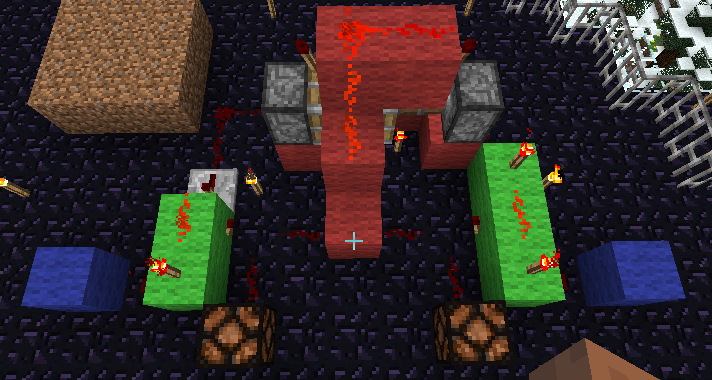 The blue blocks are buttons that feed their signals into AND gates (green blocks). The outputs of the AND gates will activate Command Blocks (shown here as redstone lamps at the bottom of the image) and will also feed into the input of a T flip-flop circuit (red blocks). The output of the toggle circuit runs behind the red blocks and feeds into an input of each of the AND gates.

This circuit should give you the ability to allow one player at a time to teleport into your quiz area via a button press. Once they reach the end they can then press another button to teleport out and reactivate the entry button for the next player. I'd also suggest enclosing the circuitry and your quiz area in bedrock, so your average player can't mess with any of it.

As for how to actually implement this, I have no idea. Obviously, you'll need to have at least op powers so you can spawn the command blocks. Beyond that, I can't give many details.

Iron doors with a button will make them impossible to open until the player passes the quiz and steps on a pressure plate, which will then allow the doors to open again.

You can use a testfor command that is on a clock and from the command block is comparator that goes to iron door that is closed as if it was opened and if player enters iron door, it closes and anyone other cannot get in until he/she leave

3
One person at a time door
2
How do I prevent a second player from entering an area occupied by another player?

6
Do amplified worlds have any flat areas?
1
How can I detect if only one out of 8 lines of redstone is on and block the others from passing trough?
4
Vertical redstone crossroads
3
Synchronize two redstone pulse inputs
0
Minimum distance between Minecraft job blocks?
1
how to prevent lag in minecraft server?