What are ammo boxes for?

I've started up New Vegas, and exploited the shop glitch to get some caps. (SO glad they didn't fix that bug.) So I got some decent weapons and ammo, but saw some things in the shop that I wasn't sure what they were for.

Under Miscellaneous (not ammo), there were ammo boxes. They had weight. (I'm not playing in Hardcore mode, maybe my next playthrough.) They weren't in the ammo section.

If I were to buy ammo boxes, what can I do with them? Can I use them somehow to give myself ammo?

Ammo Boxes are essentially a source of cheap bulk ammo. If you'll notice, each one mentions that it's a particular kind of ammunition. If you buy an Ammo Box, drop it on the ground, and then interact with it (Not sure if there's a smoother way to do this, but it's how I figured it out), you'll get a whole lot of ammunition. For reference, the box of Bulk Energy Cells sold by Chet in Goodsprings contains 100 cells. Unfortunately, being Bulk ammo, each one does 85% of normal damage. Good enough for cash-strapped Couriers, but far from ideal.

Also, be sure to distinguish Ammo Boxes from Ammo Cases - the latter are weightless, and are used in crafting for the production of new and specialty ammo.

Ammo boxes are exactly what they sound like: boxes of ammunition. When you see ammo in the wasteland, it's never sitting around in the form of individual bullets; you always pick up little boxes or magazines that look like these: 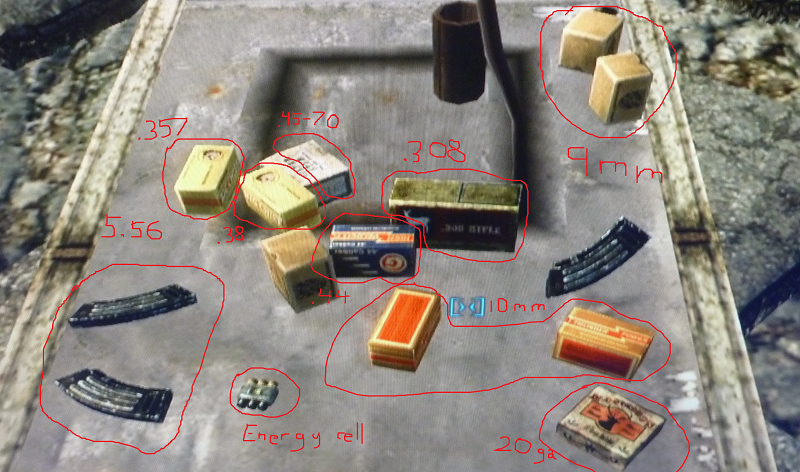 Some, but not all, ammo boxes contain bulk ammo. Look for the word "bulk." Here's what I got with my bulk energy cells: Gun CND × 0.85 / DAM × 0.85. In other words, bulk energy cells do only 85% of the damage of regular energy cells, but also only degrade your weapon 85% as quickly.

"You'll be cleaning and fixing your gun a lot more than usual when you use [surplus ammo]."

Note that I have not tested all bulk/surplus ammo types, and others may have different ratios for condition or damage or other effects.

If you only buy one ammo box, it automatically converts into the specific ammo type in your inventory. If you buy more than one in a single purchase (ie 3 energycell ammo boxes) then all three boxes go into your inventory intact and must be dropped and picked back up in order to convert them.

The box probably reduces or negates the weight of ammo stored in the box in hardcore mode. If the box weights 5 pounds and you have 8 pounds of ammo it would make more sense to put the ammo in the box and save yourself 3 pounds or something to that effect. I have no way of testing this theory at the moment but it would seem reasonable to me. If you test my theory and can confirm or deny let me know.

14
What is the shop glitch in Fallout 3 / New Vegas?
1
How do you exploit the level/perk/experience glitch in “Run Goodsprings Run?”