Playing oldgame in Dosbox, is sound blaster or Roland better?

I'm playing an old game in Dosbox. The game asks me whether my sound card is Sound Blaster or Roland. What should I choose for best sound? 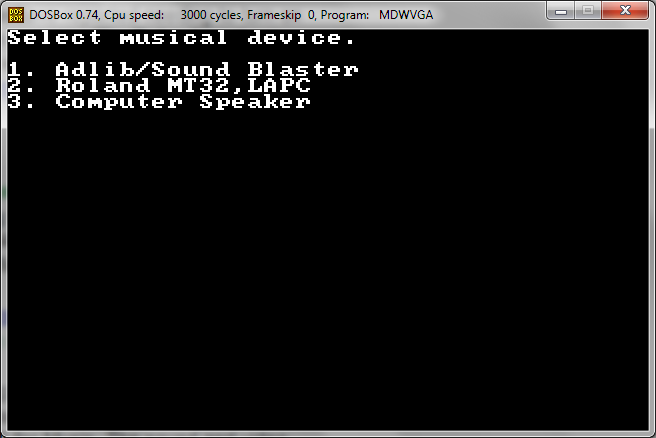 Game happens to be http://www.gamecrafters.com/gamecrafters/maddog/index.html if you're curious.

Audio quality is somewhat subjective, although it's my opinion that the Roland MT-32 produced superior music quality. You can compare them with a number of videos on YouTube. Here's one for Space Quest 3:

DOSBox, however, doesn't emulate the Roland MT-32. It only passes MIDI data to whatever MIDI devices are available on your PC. This might be the actual Roland hardware, although that's unlikely in this day and age. However, most modern sound cards have rudimentary support for MIDI, but the quality depends on your card, its drivers, etc. There are a few 3rd party MIDI device emulators for DOSBox - there's a good article on their wiki about setting them up.

So, to summarize, you'll probably get a better quality out of the MT-32 option, but only if you take the time to set it up and configure DOSBox/your PC properly.

Boxer.app, a popular DOSBOX wrapper for Macs, has recommendations for preferred sound systems in the help file. They are (in order from best to worst)

Boxer added special Roland MT-32 support in 2011; it's possible this isn't available in other DOSBOX variants.

On my PC, I found that for this particular game - Maddog Williams - Sound Blaster sounded better. Roland played a constant high tone behind the music.

TL;DR If you have a choice between General MIDI and Sound Blaster for music, always choose General MIDI. MT-32 requires a special emulator to do.

A few things I should mention before I get into this:

As an additional consideration, the larger the sample memory on the card, the more samples per instrument the card uses. This makes them sound less "weird" on lower and higher notes as MIDI pitch shifting is done from the closest sound.

FM (or Frequency Modulated) Synthesis is using a tone generator to simulate instruments by manipulating their waveforms.

What does that mean?

Unless you're dealing with Chiptunes, Wavetable always sounds better than FM as it uses real instrument sounds.

General MIDI won the "MIDI war." As such, it's the only one supported directly by Windows via a software synthesizer (named Microsoft GS Wavetable SW Synth1). DOSBox and the like also tend to emulate FM (Soundblaster / Adlib) since that was common back in the day.

The biggest loser here is MT-32. MT-32 was an early wavetable format, but the instruments it used were different from the ones used by General MIDI, GS, and XG.

DOSBox does not emulate MT-32, despite the fact that it only requires instrument remapping and sending the MIDI command to increase the pitch bend range to 12 semitones (General MIDI defaults to 2 semitones).

Side note: Gravis Ultrasound is the third major music option. It's a wavetable option that supported loading the samples into the card's RAM dynamically. Newer versions of the Ultrasound used System Memory instead and could even be loaded as General MIDI devices.

1Despite the name, this isn't a full GS implementation. Microsoft just licensed the basic sound samples from Roland.

Like @agent86 mentions, it doesn't really matter for DOSBox specifically. FYI, I think DOSBox always emulates a Sound Blaster 16 for its audio by default (or it supports SB16 by default, not sure which). I wanted to take this opportunity to provide some background and helpful information.

In my opinion, the difference between these sound cards primarily depends on personal preference. In the days of Gravis, Sound Blaster 16, etc, each sound card had its own synthesizer for playing MIDI, which is a standardized interface for sound and music instructions. This is during a period of time where hardware had very limited memory to work with, so synthesizers would often produce radically different sounds depending on how the card was designed because none of them were able to push high-fidelity sound. This means that each sound card will play the music with different sounding "instruments," although the notes, volume and tempo will remain the exact same.

Some of those synthesizers will sound worse and some will sound better; heck, I would even go so far as to say that certain games sound better with specific sound cards than others. Doom, for instance, sounds better on the Gravis Ultrasound than the Sound Blaster 16 thanks to the crunchy electric guitar instruments and punchier percussion. SB16 has rather lame percussion and guitar instruments. Many Doom fans will praise the SB16, however, since that's how the vast majority of users played it when it was released, I think.

Here is a link to a video of "At Doom's Gate" (E1M1) from Doom being played with an array of different period-appropriate sound cards. If you play Doom nowadays through an updated source port like ZDoom, or even natively through Windows 95 or 98, then you're always hearing the "MS Synth" version of the music. That one sounds pretty good too.

If you are ever curious as to how a game you're playing in DOSBox sounds using hardware it was designed for, you can search the name of your game and the name of the device on YouTube to (usually) find a video of the game's soundtrack rendered with that device. I believe many of these devices even have emulators if you want to play the game that way yourself (EDIT: agent86 mentioned that one too -- there are even DOSBox-specific ones).

You should choose Roland MT32, but to be able to use it, these are required:

Based on this thread that has Windows-ready pre-compiled DOSBox.

As you see, the romdir it points at is ./, this means the files: CM32L_CONTROL.ROM, CM32L_PCM.ROM, MT32_CONTROL.ROM, MT32_PCM.ROM
must all be present in the path you run DOSBox in.

for Linux
I compiled mt32 support using munt as a patch for dosbox 0.74. It was a bit complicated, but basically I had to compile the mt32 libraries and make it sure they were found to let DOSBox compile, like this:

Do not run the above script directly, understand and apply it by hand, will be only once anyway.

Not the answer you're looking for? Browse other questions tagged audio-hardware dosbox maddog-williams or ask your own question.

6
Will a dedicated sound-card decrease CPU load?
4
How to fix gamepad problem with DOSBox-ed One Must Fall 2097?
27
Why do people use DOSBox over Virtualbox in a gaming context?
5
No sound in TES:Arena under DOSBox
4
Empty Production Items screen
4
Sound works but no music?
0
Can't record Old Game with sound with MSI Afterburner
5
Saving on DOSBox