One of the passwords in Assassin's Creed 2 deals with Thomas Edison and J.P. Morgan trying to discredit Nikola Tesla in order to prevent alternating current from freeing the people, or something like that. I'm trying to unlock his secret code.

The code is 139 and according to the hint button, the symbols follow a base 3 pattern - "One dot, two dots, one line, one line and one dot, and so on", and the missing symbol has to fit that pattern.

but when I enter that solution, I get a "Wrong code" indication. When I align one dot with zero, the solution to 139 comes up as:

And that code doesn't work either.

Usually there's a clue in the photos provided to explain how to align the cipher wheel, but I can't seem to find that either. There's a symbol in the "Dearborn Independent" that contains two lines and two dots...does that have anything to do with it?

What is the solution to the Edison / Ford 139 cipher, and what clue am I supposed to use to figure the solution out?

This video shows the solution of the 12th glyph. The part you're asking for starts at 2:19. 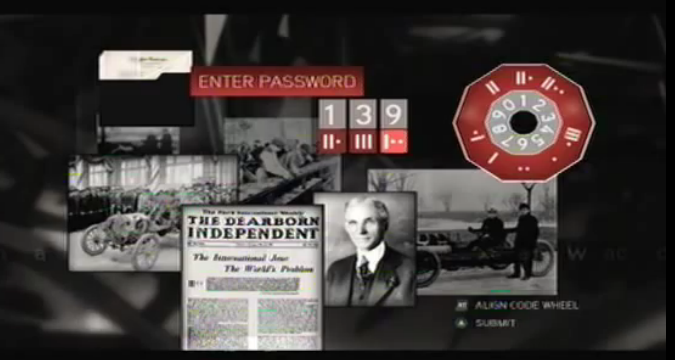 The comment says that "there is the symbol in the newspaper article and the number on the left car."

For this puzzle, you should:

The number is on the car on the left, it has a circle around the number.

Not the answer you're looking for? Browse other questions tagged assassins-creed-2 .