How does the "VOIP Ducking" feature in Guild Wars 2 work?

In Guild Wars 2's audio options, there is a "VOIP Ducking" slider. Presumably this option reduces the in-game volume when you are using voice chat, but GW2 doesn't have any in-game voice chat.

According to the wiki, this slider is supposed to work for third-party programs, but I haven't noticed this happening when using TeamSpeak 3. What programs are supported? Do I need to configure anything in my VOIP application or in GW2 for this to work?

I think it's a feature of more recent versions of Windows (An acquaintance running Seven had it, and problems with it, while my Vista had not): the sound menu in control panel has a fourth tab, labelled "Communications", that has a volume ducking control, which looks like this: 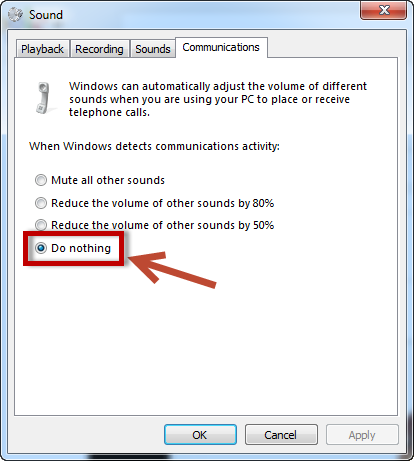 As we understood it, some programs label their sound outputs as voice: if voice ducking is enabled, and windows sees such an output, it lowers the volume of everything else until it loses the output. I would assume GW2 alters this control directly.

Sorry about taking so long, but I've finally managed to get some testing done. The results are inconsistent and fairly unpredictable, which means that my initial assumption was, in all likelihood, wrong. And I don't have a better guess.

On my machine (Vista), being in a conversation in Skype, or running Mumble (even if not connected to a server) muted the game's sound. On a friend's (Seven), ducking only worked with Mumble and "do nothing" selected in Windows, and even then it only lowered the volume "a little bit", according to him.

Also, the in-game control seems to be the desired "ducked" master volume, not the amount by which volume has to be decreased: in the leftmost position, game audio is completely mute, while in the rightmost position, it's unaffected.

Not the answer you're looking for? Browse other questions tagged guild-wars-2 voice-chat .