What is DI and how does it affect me?

The other day, I was playing both Smash Bros. Brawl and Melee with some friends and, making note of the fact that they were often surviving to much higher percentages than myself while playing the same character, asked them how they keep their stocks for longer periods of times. They told me that my problem was that I had "horrible DI" and that I should try training my reflexes to react accordingly to being hit. Although I had no idea what they were talking about, I was unwilling to enter into a large discussion and risk being pointed out as a complete newbie. As a result, I simply nodded and smiled. Now that I'm out of that environment and into a much more anonymous one, I'll ask here instead:

What is DI? How does it work? Can I perform it with all characters?

DI stands for Directional Influence, a game mechanic present in all the Smash games and applicable to all characters that is not only vital for surviving that Falcon Punch at 70%, but also for escaping all sorts of potential set-ups and combos during the lower percentages leading up to the killing blow. DI makes up a massive part of the metagame across the series, especially in Melee, where a single mistake with your DI can lead to a knee or tipper to the face...or even worse.

The basic explanation of DI is that when an attack lands, you can change the direction in which your character moves slightly (or massively, depending on the attack and the percentage at which it lands) using the control stick (as well as the C-stick). As you might imagine, this can be a life-saver in those situations where you are flying towards the edge of the stage as the result of an attack: where even a bit of extra distance between you and death could save you a stock and quite possibly the match.

Good DI is getting as close to a 90 degree angle as possible between the direction of DI and the trajectory the attack sends you at without DI. The directional vector of your DI is then added to the directional vector of your default trajectory(but not the magnitude; the magnitude of travel is constant with or without DI, except when hitting against the stage), influencing the resultant direction accordingly. If you would normally be sent flying straight upwards, you would ideally DI straight left or straight right, since this would cause you to go to the upper-left or upper-right of the screen. The general rule is to DI such that you are sent towards the furthest corner of the screen, since the hypotenuse of the right-angled triangle formed between the arrows drawn from you to the furthest sides will always be the largest side by Pythagorean's theorem(it will take more distance to kill you if you travel by the hypotenuse). 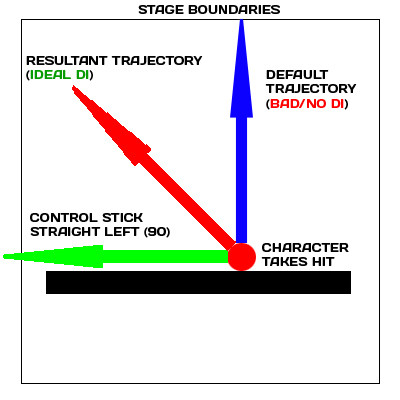 Certain moves in Melee, such as Falcon's downwards aerial (referred to hereby as dair), lead to more and more devastating combos the worse your DI is(at some higher percents with some characters, having bad DI when Falcon's dair lands can lead to an unavoidable Falcon Punch to the face). In cases like this, good DI becomes a matter of prediction: the goal is to DI such that your character will go in a direction that either your opponent didn't anticipate or that puts you outside the range of their best attacks.

As you get to higher percentages and you take powerful hits just above the stage or on it, it can be useful to DI towards the closest part of the stage. By doing so, you will land against the stage, enabling you to tech (as described in Raven Dreamer's answer) to reduce or completely cancel momentum and hopefully survive.

This is not to say that DI is only applicable to combo setups or powerful killing blows. It applies to every single attack in the game. Let's say that Fox has you pinned against a wall with his multi-hit jab(rapid kicking). You could simply choose not to DI, and take a completely unnecessary extra amount of damage, or you could DI up and escape much more quickly. Learning about different types of DI will show you how moving the control stick in quarter-circles around the general area you wish to DI will help you escape attacks such as these even sooner.

DI is trained as an instinct within competitive players. Even with all the theory and understanding of how DI works, it's still unlikely that you'll immediately possess the reaction speed to anticipate the hit before it lands and DI well. However, by remembering about DI and by applying it slowly and gradually to your playstyle(i.e. letting yourself take obvious hits at higher percentages to see what trajectories are good and what trajectories are bad), you will develop the instinct to hold on to life at the brink of defeat, so don't rush or try to absorb too much information about DI at once. Master the basics before moving on to the more advanced details, which will be included in a later update of this answer.

In short, DI OR DIE.

DI stands for Directional Influence. It is useful for avoiding being KOed by strong attacks. You can use direction influence by holding the control stick diagonally up and in the opposite direction you are being launched horizontally in, or by holding it to the left left or right when being launched upwards.

Direction influence slightly changes the direction you travel in while being launched. This (hopefully) allows you to not fly off the map, and hopefully recover via your B+up move.

I've never heard of this either, but it seems that Directional Influence, is when you move a little between when a person launches an attack against you and when it hits. It's most useful in Melee, but it can be done in other games too. You're supposed to move towards and upwards when it's a horizontal attack or a horizontal direction for vertical attacks.

My lingo is a little bit rusty, but I believe the term they're talking about is dodge-impact. Basically, if you press the Z, L, or R keys (the default shield buttons -- if you're not using the default scheme, just think "shield button") just as you hit a surface your character will not bounce off, but instead dodge into the ground or wall, instantly killing all momentum.

I'm going to go double-check this -- I'm not sure dodge-impact is the correct term.

Edit: Nope! Turns out I was 100% wrong. The above strategy might help you, but it's not the DIRECTIONAL INFLUENCE your friends were talking about. Here's a link that should clear things up: http://super-smash-bros.wikia.com/wiki/Di

Editedit: and for what it's worth, the first technique above is "officially" known as "Momentum Cancelling"

18
How can I become a pro at Super Smash Bros. Brawl?
1
How many DI trajectories are there against up-throw chain-throw?

3
What are the differences between Marth and Roy?
5
What are the chances of Mr. Game-and-Watch's Judgment Hammer?
6
How does Jigglypuff's Rest work?
7
What use does Gardevoir have?
2
What difference does level make?
7
What is a “Power Throw,” and who all gets one?
0
Do non-player-entities affect move-staling?
9
What can be Blocked by the Hylian and Deku Shields?
2
How does auto handicap in Super Smash Bros Brawl work?