What Effects do the Different Player Attributes Have on Gameplay?

When you start a new game of NEO Scavenger, you get to pick which abilities you want your character to have. Each of them has a short description when hovered over, but none of them really tell you exactly what they do in terms of gameplay. For example, I've noticed that 'Myopia' (description: near sighted-ness) reduces your chance to find look when scavenging an area, and I don't think it actually reduces your vision distance on the world map.

Does anyone know what quantifiable effect each attribute - both positive and negative - has on the game? 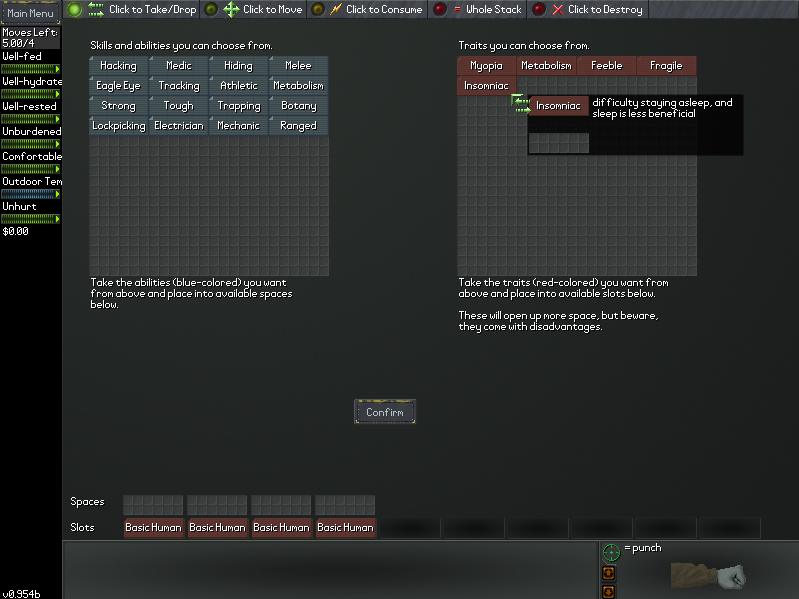 I have to admit I've been both tempted and reluctant to try and answer this question. Tempted, because I like helping players, and enjoy sharing game design discussion. Reluctant, because I deliberately obscured the mechanics of the game as part of the design. Whats more, the stats are likely to change as the game is in development. And in some cases, a complete understanding of the mechanics would be beyond the scope of a short answer.

However, I believe I can share some useful info. The game has some skills which are currently only used as part of encounter/scavenge responses and crafting recipes. Such skills include hacking, botany, trapping, lockpicking, electrician, and mechanic. There is no passive effect imparted by these skills at this time.

The rest have passive or mechanical effects, and without quantitatively listing every detail, they include:

Traits do the following:

Some abilities also affect AI morale, such as strong or tough. Having either of these will make you seem tougher to an enemy, making you less attractive as a target. Similarly, having either of those makes them more confident.

Finally, I'm forgetting a lot. This is just from memory, since there's a chain of variables I'd have to trace for each one to know for sure. There are some hard-coded effects, too. But generally, they work as described above. More importantly, they're designed to do "what you'd expect," meaning there are some effects which I tangled in there based on our perceptions of those abilities (like the morale effects).

And, of course, I reserve the right to be wrong, and change my mind at any time :)

Not the answer you're looking for? Browse other questions tagged neo-scavenger or ask your own question.

7
What Do the Red Footprints On the Map Mean?