What's the fastest way to take over a portal in ingress?

I built up an inventory of over 20 level 1 xmp bursters, and thought that would be enough to take over a low level portal - not even close. However, I did finally notice that I did different amounts of damage to the resonators depending on where I stood. I started off standing near the portal, but only did about 1% damage to each of the surrounding resonators. But if I moved closer to the resonators, I did up to 8% damage to that one resonator, and a little bit to the others resonators in range.

Is it faster to detonate xmp bursters on the resonators or on the portals for maximum damage?

The basic rule for a single standing wide spreading portal: you start on top of the strongest resonator and once it is almost finished you move to the opposite side or if there is a high level resonator (say 6) which is not at the opposite side you should take it anyway.

You can do finishing blows from the middle, even from xmp 1 all resonators get 1-2% damage.

BanditoBunny suggests to start with the strongest resonators, but that's not always the best strategy. When resonators vary a lot in level and charge, it's often better to take out the weakest first:

As you note, if the resonators are placed far apart, targeting individual resonators is much more important with low-level XMPs, because they do very little damage at longer range. Roughly starting with level 4-5 it's more efficient to stand between two resonators; with 7-8 you should aim somewhere half way between the portal and a resonator.

The IPAS (Ingress Portal Attack Simulator) is a very useful tool to get the hang of attack mechanics and to plan your attacks in advance.

Attacking this should be a no-brainer: 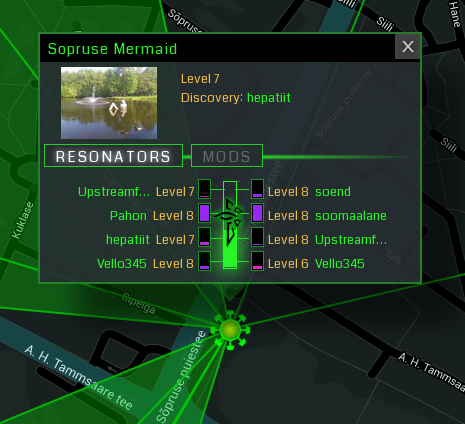 A portal of your own level is killable, even if it's being recharged (if it's a higher level player recharging it, then forget it).

Tips for doing so:

1) Ultrastrikes do much more damage in a very concentrated area. So if you want to destroy a resonator, stand right on top of it and ultra-strike it. If the portal is shielded or has attack mods, then do the same on the portal itself.

2) Learn to concentrate your hit. If you hold down the fire button, the attack forms in a ring around the arrow that shows where you are, and contracts toward you. Releasing the fire button at the point of closest contraction gives you a bonus to your damage for both bursters and ultrastrikes.

3) It's a good idea to take shields away before bringing out the bursters. See above regarding ultrastrikes; they're made to knock out shields and mods.

4) Once you've killed the shields and mods, check on the welfare of the portal after about ten or so hits. If the resonators are showing significant damage, keep at it. But if they look fine (or if they replenish as you watch) then go and do something else for ten minutes. You've gotten rid of the shields, so the portal's more vulnerable. Give the owner time to get bored, then come back and hit it again.

5) Always, always always hack a portal before you kill it. Any hack, anywhere, can give you valuable gear.

6) If you have limited ultrastrikes, use them to kill mods and shields first, then high-end resonators next. The reason for this is that you'll rarely knock out a high-level resonator in a single hit, which gives the owner a chance to replenish it. But when it's down, it's down. Bursters can swamp lower level resonators more easily.

7) Make sure in your own mind where your stopping point is; when it's more to your benefit to keep going and kill that last resonator, or to plough on ahead, even though it might leave your reserves dangerously low. (For me, that number's anything under fifty). If you're killing a big field, sometimes it's worth it. And sometimes it's not.

8) If all else fails, bring a friend. Two sets of bursters hammering a portal can be a death-blow. If the friend is of a higher level than you, all the better. It's in his/her best interests to assist you in levelling, after all.

24
How to set a wide resonator spread radius for a portal?
27
What's the fastest way to level up to level 2 in ingress?
6
Why can't I link any portals in ingress?
4
Is there a resonator / xmp bug for others? Or are the last few resonators now just much harder to destroy?
11
What does it take to bring down a L5 Resonator If i'm only L2?
14
Does the distance from the portal matter when upgrading a resonator?
22
In Ingress, when are links destroyed?
3
Portal attack power in ingress
5
Ingress Minimum Attack Efficiency