With their 360 degree "special sense" (not sure how it should be called), these little bastards are pretty hard to kill. Is it possible to kill them with ninja gear (i.e. without any trap or external lethal elements) ?
Stealth kills won't seem to work on them, and I can't knock them out: they dodge most of my hits. 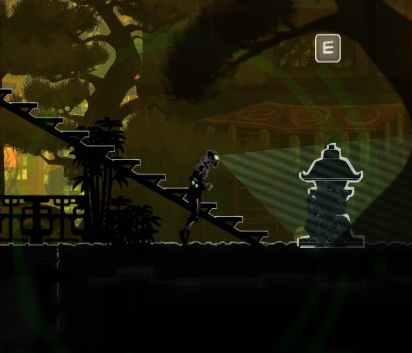 Trying to fight a Stalker with your sword is suicide. Unfortunately stealth kills are also out, as you've noted.

Many types of lethal Ninja gear will do in a Stalker, but my favorite is probably the Hisomu Terror Dart. It's easy to hit them with this from a distance and remain undetected.

Remember that you can also return to any equipment selection spot (marked by a flag) to resupply your lethal gear. If you're stuck on an area with a lot of guards, this can be a real lifesaver, and there's no penalty for returning repeatedly.

However, there are several spots where you'll have limited equipment and have to deal with Stalkers. In several spots your only gear will be the non-lethal bamboo dart. In this situation, the best thing to do is to stand in a spot where you know you will set off a trap if you take a step in the wrong direction, and then throw a dart at the Stalker. Then flee to a safe distance. The Stalker will come to investigate, wander around a bit seeking you, and set off the trap, effectively committing suicide. You can also throw a dart at the hanging bombs to knock them to the ground into a Stalker's patrol path, and they will walk right over them and die.

With all that said, my most common strategy against Stalkers is avoidance. Watch their patrol paths, and you can find an opening to slip past undetected. Even though they have a detection ring all the way around them, they can't detect you while you're in a hiding spot. You can use your grappling hook and various hiding locations, along with careful timing, to avoid most of the Stalkers in the game.

In addition to what agent86 has mentioned, it is also possible to knock Stalkers down using the Rising Snake spin kick (up + attack). This opens up the stalker to death by falling, or to a Peasant's Death kill. However, note that Stalkers will only be susceptible to these on every third knock down.

This approach feels less like "cheating" to me, and is especially gratifying when playing the Path of Silence. Simply sprint up behind the stalker and do a spin kick (up + attack) to knock it down while it is still startled. You will need to repeat this two more times as soon as the stalker gets up (again, fairly easy with the spin kick). If the stalker takes a sufficiently long fall after your third kick (eg. off a ledge), it will die, and you will be rewarded for a "Slippery Slope" kill.

Not the answer you're looking for? Browse other questions tagged mark-of-the-ninja or ask your own question.

4
What are the requirements for killing enemies with traps?
7
Does alerting a dog cause you to lose the no alerts 3,000 points bonus?
6
Can I complete the game both ways?
7
Is it possible to kill Elite Guards silently?
2
Mark of the Ninja time freeze bug
0
Mark of the Ninja - statistics number of death?
0
Are the results of each mission in game “Mark of the Ninja” are already saved permanently?