Are any of the skills actually useless?

I know that many of the skills available in game are down to playstyle but I've heard that training certain abilities, for example Swimming don't really provide much of a bonus and can prevent you from being powerful enough by the end of the game to perform some of the actions required (like hacking doors or lock picking) and can make the game more difficult near the end of the game. 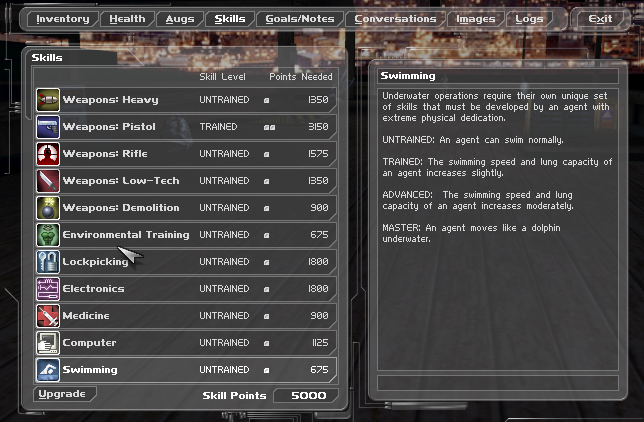 Are there any of the other skills that I should avoid due to them being generally useless?

Are there any skills (other than my primary weapon skill, obviously) that I should definitely take?

The lovely thing about Deus Ex is that the answer to this (and many similar questions) is: "It depends on you."

That is, the usefulness (or lack thereof) of nearly any skill set is almost entirely dependent upon your play style and strategy. For most missions in Deus Ex, "TIMTOWTDI" is fully applicable.

So, you want to be a super-stealth sniper assassin whose enemies never see or hear him coming? Beef up on Weapons: Rifle, Weapons: Low-Tech, Lockpicking, Electronics, and Computer. Dump Weapons: Demolition, Weapons: Pistol, Weapons: Heavy, and Medicine. Even Swimming could be useful here, for finding unconventional paths to sneak around your enemies.

Wanna get up close and personal, watching the life drain out of your enemies eyes as you annihilate them? Load up Weapons: Heavy, Weapons: Pistol, Weapons: Low-Tech, Medicine, and Environmental Training. Stay away from things like Lockpicking and Weapons: Demolition.

By far, this has to be my favorite feature of the game - the fact that you are almost never railroaded and can, more often than not, choose your own way to beat the game.

For example, Medkits are redundant if you have Regeneration (so the Medicine skill is not useful).

When swimming, Regeneration can heal you faster than you take drowning damage, so Swimming and rebreathers are redundant. The hazmat suit is also redundant because Regeneration usually overcomes toxin and radiation damage. This makes the Environmental Training skill only useful for wearing Ballistic Armor and Thermoptic Camo.

The utility of the Weapons: Low Tech skill isn't immediately obvious to new players. It is useful to those playing stealth characters or pacifist characters, because it makes the Riot Prod and the Baton into extremely effective weapons. Master Low-Tech Weapons with a L2 Combat Strength Aug and you can use the Dragon's Tooth Sword to break nearly anything breakable in the game, including cameras, turrets, and alarm panels.

I have never taken Weapons: Demolition - the grenades already work plenty good and disarming them is pretty easy even on untrained.

Note that you can un-train Weapons: Pistols at character creation. This allows you to begin play with 6,575 skill points.

If you like facing down your enemy and watching him croak, master rifles. Get to know the Sniper Rifle and Combat Shotgun (the two most useful guns in the game.) Save range upgrades for the pistol or crossbow. Upgrade the sniper rifle to 10 rounds. Save at least three of your clip upgrades for the Combat Shotgun. When it has 16 shots or more and you are a master, you can mow down whole crowds of enemies with ease.

For a challenge, train every skill to the Trained level and don't use any more skill points. This way your character is not an invalid but not a super man.

Unless you like pure stealth a whole lot, avoid run silent. I wish run silent was a get it and have it right away upgrade. Spending three canisters to upgrade it to actually silent felt insulting. Super speed/jump is much more useful for casual, evasive and berserker style play. Upgrade swimming to Trained. You don't need more. Swimming is rarely used unless you make a point of going swimming. As far as I know, there are no great hoards of treasure under the water. One aug upgrade canister in Hong Kong is the best I ever found. An early game shotgun and weapon upgrades off of Liberty island and some rockets in the Ocean Lab are good as well. Taking a melee break on your second or third, etc. play through is always fun too. Aqualung and Environmental resistance are both great in theory but there very few places where you need either one. Take either one and put one upgrade into it if you have never used them before.

The menu glitch makes Lockpicking and Electronics redundant; the laser mod does the same to the Pistol skill.

Two very good tools for long-range combat, the Pistol w/ Laser and the GEP Gun, may be obtained within minutes. Good close-quarters weapons are harder to find until after the first plot twist.

Not the answer you're looking for? Browse other questions tagged deus-ex or ask your own question.

5
How do I get past the stealth part in the tutorial?
20
What are the consequences of your decision on the plane in Deus Ex?
5
Is the 'Ton an impossible shape?
1
Should I persist to try to get in the subway after I broadcast the message In New York?
5
What are the different routes to infiltrate Liberty Island?
3
Where are Deus Ex saves stored?
1
The last readable newspaper, book and PDA in Deus Ex
2
Can I buy equipment from Shannon if I “visited” her in the toilet before?
2
What's the difference between difficulty settings?
2
Does Anna Navarre and Gunther Hermann's killswitch codes have any meaning?