How to pick the best support for your ADC?

Since I have babbled a wall of text I will start with my question, Should a support champ be picked to cover an ADCs weaknesses or strengths? Some examples would do just nicely, I have seen a chart that gives the best combos for support/ADC, couldn't find it myself.

What I'm trying to do with this question is provide a sort of foundation for picking my support champion for an ADC champion or even vice versa what ADC should I go with certain support champions. I ask this because of the key role support plays, as games are won and lost in the hands of a support just as easily as they are with any role in LoL.

Support plays such a big role early game for Bot Lane that overlooking the importance will cause you too fail repeatedly. I do my best to pick support champions (I prefer meta support champions) that I have done well with in a certain ADC/Support combo. I will mention one of my favorite combinations being Leona and Twitch. Twitch usually being a weaker ADC (atleast in my eyes) combined with the awsome power that is Leona allows me to feed him repeatedly, and not until yesterday did I find myself doubting my knowledge of the support roll. Lets just say I did awful, one of my worst games with Leona, the weird part being the mistakes I made weren't all that severe, mistakes like harassing to hard, causing us to lose the trade and be forced to tower hug till a jungler saves us. We basically just got outplayed and for some reason those are the hardest loses to swallow.

Anyways, I started to think "why am I playing this support champion just because I have done well with this support/adc combo in the past". I started to do this a lot when playing League of Legends as I had recently watched a video about elo hell where the guy talked about the only thing that holds players back is their refusal to take blame for their own mistakes in a game and blame everything else. Having been consistanly stuck around 1000 elo last season with over 100 games played in ranked, I had lost all hope of ever getting anywhere close to 1250 or 1500 for that matter.

Getting back on track now, I go back to my thought about support/ADC combos. I realized that I need to start picking support champions to play to an ADCs weakness and/or strength. An example I will mention is the Vayne/Nunu, which to me is probably the deadliest bot lane combination. Nunu having huge sustain and harass abilities allows vayne to lay back and CS all day and if engaged in a 2v2, Nunu gives an attack speed boost that makes Vayne tear through even the tankiest of supports. Not to mention Vayne being the strongest late game ADC in LoL, some people would debate Corki being the best late game (semantics really).

Now to get to my question, I would like to start picking support champions that mesh well with an ADC. Support Champs that cover an ADCs weakness or plays to their strengths, or both. I think counterpicks bot lane to be a mere myth and really never decides the outcome of the game. I'm convinced ADC/Support combinations to be the real path to winning.

It depends, I like to choose a support based on the ADC early game play, if the ADC is squishy, let's say for example Ezreal, I'm more likely to pick Soraka or Sona to sustain him on lane. But, if you have a more sustainable ADC, you can pick a more aggressive support like Leona, Nunu or Zyra.

Another thing to observe is the synergy of Support/ADC level, Leona has her Q,W and E ready by level 3, which can combo really good with Graves, where in this level he's really great. We could also mention some good combos like Ashe and Janna, due to the synergy of Janna's Shield and Ashe's crit, and Ashe's slow with Janna's slow.

Besides, picking a champion that you enjoy playing, which will also help in your performance, you could ask the ADC which support he enjoys to play with, if he has any preference and you feel his preference is useful, you could pick it too.

I found the League Support Suggester, a recommendation software to provide the best support for your current needs.

I've also found the following chart which really helps me when to choose a good support for my ADC, I usually pick one of the three recommended: 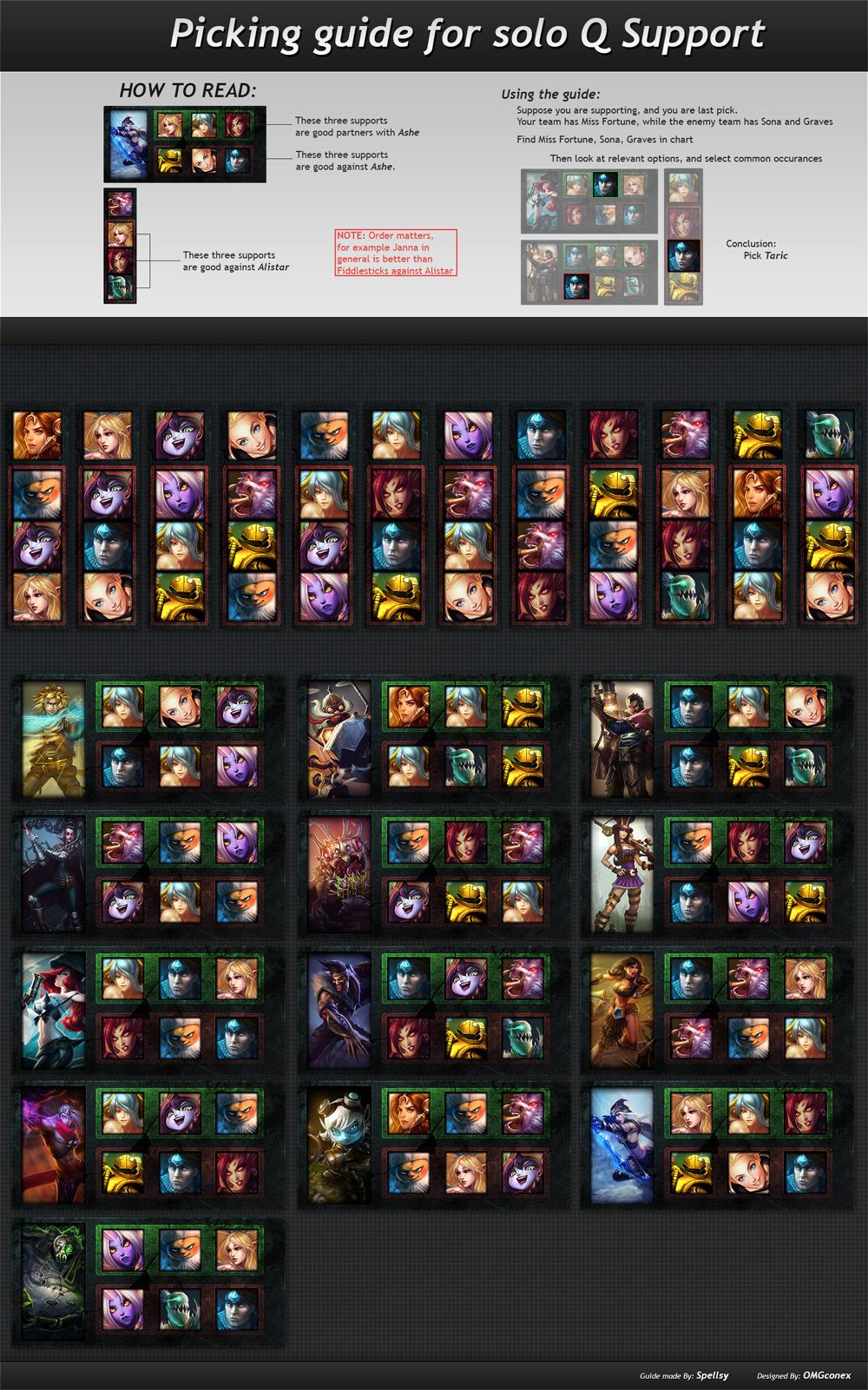 First of all (before my opinion) I have a chart that might be what u were looking for:

You can see there (stats talking) which combos are most successful in bot lane.

Other than that my opinion is that a good support will be able to FACILITATE the adc carry the best possible way.

That being said you have to get to know your carry first. What is his/her most comfortable playstyle while laning?

Is he aggressive or defensive? Does he focus on farming or poking? If you're solo queue and you don't know the other guy just ask him that exact thing before the game starts.

Another aspect is WHO your carry picks. You have to have good synergy. I'm not going into specific details as you already have the chart. Just giving you food for thought.

It's important to think it out on your own. Because there are no rules set in stone. Trial and Error with a specific teammate will make you a better support and a better champion picker.

EDIT: Decided to give a couple of my favorite support champs when I play adc (usually my pref. roles are ADC>Solo Top>Support>Mid>Jungle (ewww - lol) so you get to hear the carry's side of the story)

Being Ezreal very often I find that a very fun combo is Lux + Ez. Having similar ults that can kill any squishy instantly if synced well plus really good poking ability. That all changes though if u have a strong healer on the other side.

One of my favorites is Alistar with Ez. Alistar is a true bodyguard which is just what ez needs actually. He can heal you and can be a pain in the ass for anyone trying to get close to you. Plus his stun is very helpful if you decide to attack because it keeps them still for long enough for you to hit them with a full round of your spells.

Other fun combos are Nunu + Miss Fortune, Nunu + Ashe (although ashe is really weak these days I don't pick her anymore).

This obviously means you have to know who you are laning with and the reason why people often playing together will won the lane over two "match-made" enemies.

Of course, there is always many ways to cover for one player weaknesses. But you need to know ALL the supports you can play. If you can pick champion which have a synergy and allow you to correctly support your team-mate, good for you. But you should always give the preference to a champion that helps your player rather than one which helps his carry.

However, what to do with someone you don't know. Well, learn fast. Pick a champion you truly master and do your best. Does he follow when you go forward? Does he reacts when you put a stun? Does he do well when you get caught? All these situation will help you see how he his playing. Then adapt your behaviour to this.

2
Should I try to Counter Pick the enemy champion if I do not know how to play the Counter Pick itself?
1
How do you support Ezreal?
3
Would it be viable to run an AP champ in bottom lane with a support and put your ranged AD carry in mid?
5
How do I counter support Zyra?
6
What beats an ADC/Support combo?
1
What influences a change of Meta?
5
Are characters like Annie and Zyra really 'supports'?
2
What is a safe high elo counter to Leona if Thresh and Lulu are banned?
4
Why not ADC Nami?