I had just updated my friend's minecraft server to the beta build of bukkit (1.4.6 R0.1). This restored all of the plugins that weren't available when it was vanilla.

However, the internet (and its users) seem to hate me. Just after resolving most problems, I logged on. I keep on dying and dying and dying continuously. I narrowed the issue down to the Essentials /kill command. I used PluginManager to disable the command, and the dying stopped. Apparently someone put a command block on a clock, with the command set to /kill werdnaminer (me!).

Is there a way to log the triggering of command blocks? I need a way to locate and disable that clock without messing up what contraptions others have created.

EDIT: Looks like it was added in the 1.6 update! YAY! Thanks Mojang! (or was it Spigot or Bukkit?) 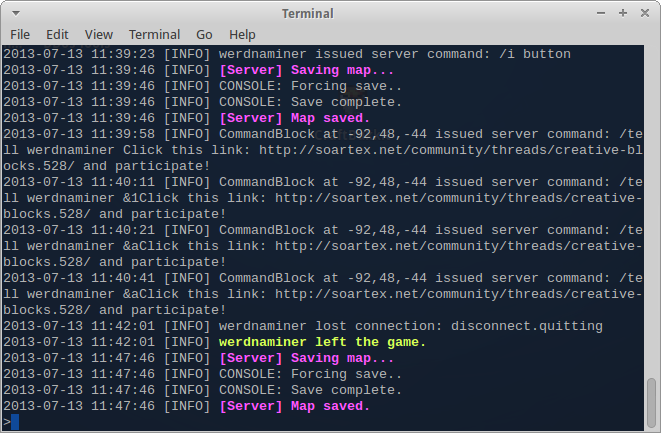 Only ops are able to program command blocks, so that should narrow the list of suspects. Some (virtual) face time with your ops should reveal the guilty party.

In the meantime, if your map doesn't rely heavily on command blocks, they can be disabled by setting enable-command-block=false in the server.properties file and restarting the server.

To locate the offending block you can render the world map showing just command blocks and redstone, using one of the many 3rd-party cartography tools. (I quite like Minecraft Overviewer for this use, and though it's not technically 1.4.6-up-to-date, it can handle Anvil and custom block IDs so it's still compatible.) This will give you a high-level view of the problem and let you zero in on the possible culprits. Compare it to a regular overworld render to find a recognisable landmark nearby, then fly/tp there, unearth it, and render it inoperable.

Command Block dont have the kill command inside.

all other things comes with Mods/Plugins

read this http://www.minecraftwiki.net/wiki/Command_Block and you know what the command block can do.

Not the answer you're looking for? Browse other questions tagged minecraft-java-edition minecraft-commands minecraft-bukkit or ask your own question.

37
How to find a player's redstone clock (or other aggressive circuitry)?