How do I clean up this space-town?

After having some successful and (primarily) not-so-successful rendezvous in space, the area around my nascent space-base is full of detritus. Ending the missions responsible for littering didn't remove any of the space junk, so now it's just sitting in orbit complicating maneuvers. This stuff generally doesn't have any docking ports or anything like that, so there doesn't seem to be a way to grab on to it with a ship.

I'd like to make like a sheriff and clean up this space-town, but as far as I can tell the best way to do that is to run over every individual piece of debris with a ship which, although fun, is neither practical nor efficient (it tends to make even bigger messes).

Are there any useful in-game components like grappling hooks or nets or magnets that can grab on to arbitrary components which I've missed, or failing that are there any good mods for playing space janitor?

Another option for removing debris is to limit how much of it you want to keep around. One of the settings allows you to choose anywhere from no debris, to unlimited debris.

This option is available under Settings in the main menu (the menu you see when first starting the game, not the in-game menu), and is called Max Persistent Debris. 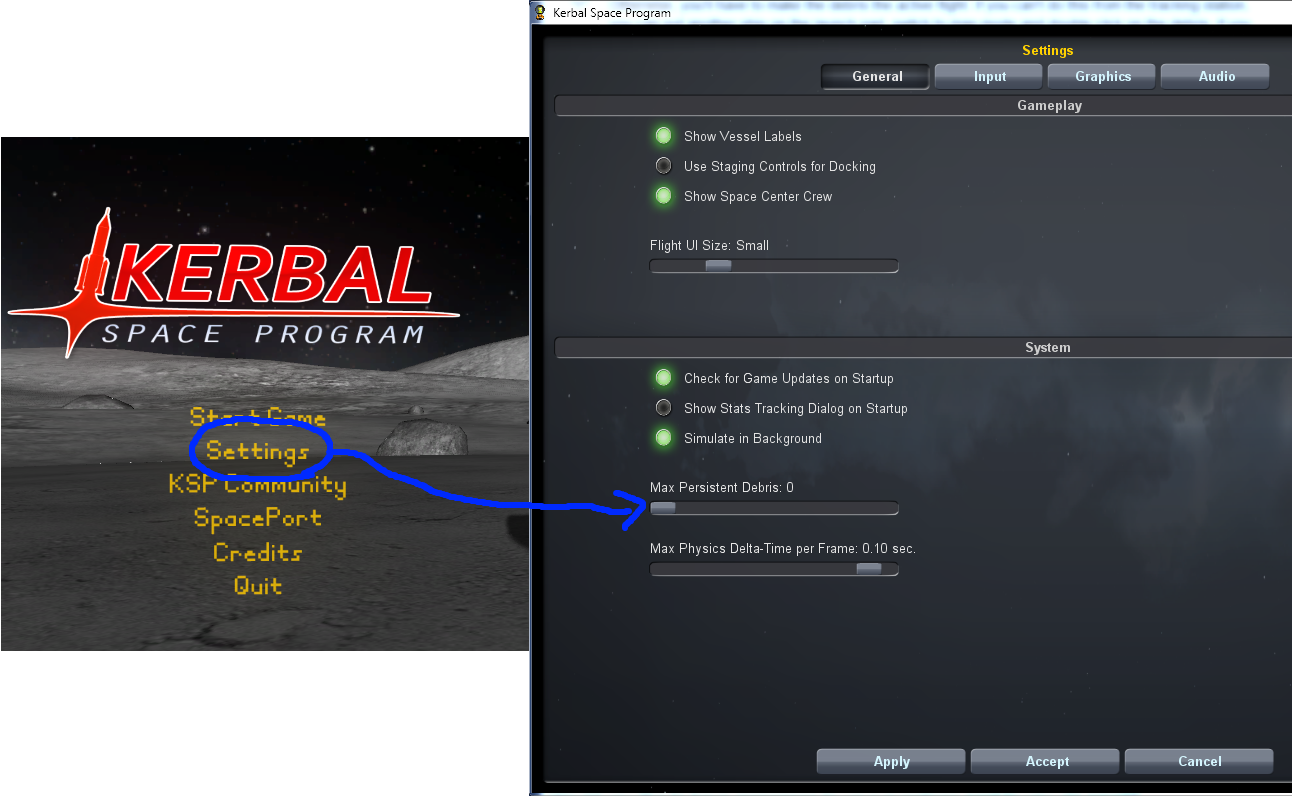 Keep in mind this setting only handles debris from not controlled flights; it won't automatically kill everything that gets detached from your current launch. That only happens when you end the flight, or switch to the Space Center.

Not quite what you were asking for, but the only other option, yes, is to intercept each and every piece, and manually de-orbit it.

As of version 0.20, the tracking screen will let you select debris and "end flight" to clear it out.

Not nearly as much fun as some of the other methods on the page, but simpler.

Unfortunately, I was unable to make the debris my currently active flight using the techniques @MBraedley suggested. A solution that worked ended was to back up my ship files (in the main Kerbal Space Program folder, under /saves/%save file name%/Ships) and create a new save, though that also wiped out my space base. No matter! Science carries on!

In the future I will probably just ignore the space junk, as collisions are either hilariously unlikely or just hilarious.

If you want to prevent space junk using an in-game solution, you can design your vessels and plan your missions so that any junk you decouple will crash into a planet. More challenging than editing a .cfg file to tidy up.

If you have to detach a stage while in stable orbit then attach an unmanned command module to it somewhere, with some batteries or a generator. That way you can control it after separation. Then if you also give it some fuel and a jet, you can set it on a collision course with a planet and let gravity do your cleaning for you.

there's a couple mods out there that give you fun options like lasers and whatnot to blow stuff up with. works great but because of game engine limitations you need to get very close, within a couple kilometers. it's a lot of work. for the same effort you can place a small rocket in retrograde orbit with a zero-separation intercept on a piece of debris.

be aware that this can generate many smaller pieces and potentially worsen the problem. if you're really unlucky you'll have a cascade effect and then runaway kessler syndrome as everything in orbit starts disintegrating.

personally i don't mind, and i took a decidedly... tim 'the toolman' taylor approach. i lofted the biggest meanest single-stage to orbit rocket i could in a polar orbit. right in the middle of my orbital field, altitude wise.

said rocket consisted of six liquid engines, with the tanks separated by stack decouplers and fuel lines to make sure they all worked. in orbit i ditched the tanks. sepratrons ensured they spread out. i now had 20-odd hunks of rocket whizzing along at a high angle to normal orbital paths.

the main core of the rocket consisted of stacks of SAS modules layered between decouplers, held with tri-couplers. three sequenced units of this mess.

using roll controls i spun the stack up as fast as it would go and decoupled the whole works in sequence working from back to front to maximize the fanning out.

then it was a matter of maxing out the time control.

the shotgun method is a LOT of overkill but it DOES work.

and sometimes you'll have a launch get headshot by a hunk of satellite, like happened to me last night.

You can end missions from the tracking station. While you can't multi select those pieces of debris, it's just three clicks to select, terminate (the red X button), and confirm.

However, sometimes you can't select the debris with the tracking station.* If this is the case, it's not so simple. Your first option is to edit your save. I don't recommend this unless you know what you're doing. Otherwise, you'll have to make the debris the active flight. If you can't do this from the tracking station, you can put another ship on the launch pad, switch to map mode and double click on the debris. If you activate a flight that you want to keep, you can use the [ and ] keys to switch to a nearby flight. Hit esc and end the flight as normal.

*With recent changes, you can now filter the list in the tracking station to show only debris, which will show all the debris.

If you're looking for a 'realistic' solution from the Spaceport, you could use the Kerbal Attachment System to snag debris, and fix each part in place with a Quantum Strut so that they wont float away as you grab other pieces. This ship will be an enormous power hog, so pack your RTG/Solar. You could potentially enclose all of that in a cargo container (you could handmake one with landing gear and structural plates, or get the B9 pack for actuating spaceplane cargo bays of various sizes) if you want to do a 'reusable' mission.

This solution will be time-intensive, and is largely a method to carry out a debris-removal mission. If all you want is the junk to be magically gone, refer to fbueckert's answer

I know this is an old question, but one thing I'm surprised I didn't see is the Advanced Grabbing Unit. (It may have been introduced after this was asked, since I see some references to version 0.20. For the most realistic approach, one could definitely make a Space Janitor ship with a grabbing unit on it, fly around clamping up debris, altering orbit to deorbit, let it go, re-orbit the ship, rinse and repeat. I've done this before, and honestly (for me) it got incredibly boring after the first few times, so once I ended up proving to myself I could do it the "right way" I ended up deleting the debris items in the control center.

if you feel like adding a few more mods, add romfarers lazor system, and his missile and sunbeam mod, they're incredibly useful for this kind of thing

9
Can I activate engines on spent stages?