How will a mod that modifies the rate at which skills increase, affect or stack with the in-game skill rate modifiers (e.g. Standing Stones)?

I have installed the 2x Skill Increase mod (it also has a 'half-increase' version), which claims to "double the skill increase rate for all skills".

I was wondering how this will affect or stack with in-game skill rate modifiers, like Standing Stones. For example, if I have The Lover Stone's effects (learn all skills 15% faster) active, how will this affect or stack with the 2x Skill Increase mod? How much total skill increase rate will I get?

What about the other in-game skill increase rate-modifying Standing Stones (Warrior, Thief and Mage stones) or abilities like Ancient Knowledge (+25% Armor if wearing all Dwarven armor, smithing skill increases 15% faster).

Yes, percentage increases should apply to the effects of mods on your skills, assuming they're changing the rate in the sensible, straight-forward, native way that Skyrim already uses to determine improvement rate.

Internally, Skyrim has a number attached to each skill so that the developers could tweak the rate at which they improve on a per-skill basis. These numbers are in the data files rather than the engine. This allowed them to set a rate for, say, Alchemy's improvement, see how it affected gameplay over time, and tweak it up or down without having to recompile the entire game from scratch. The various bonuses you can get from Standing Stones and other sources are designed to layer on top of these to give the advertised increase, no matter what the number.

What levelling-rate mods change is this number. Since they change the same number that Skyrim was already using in the skill-rate equation along with the things that give a percentage increase, the percentage increase is applied to the new value just fine.

As we can see from opening 2x Skill Increase in TES5Edit, that's exactly what this one is... er, waitaminute... 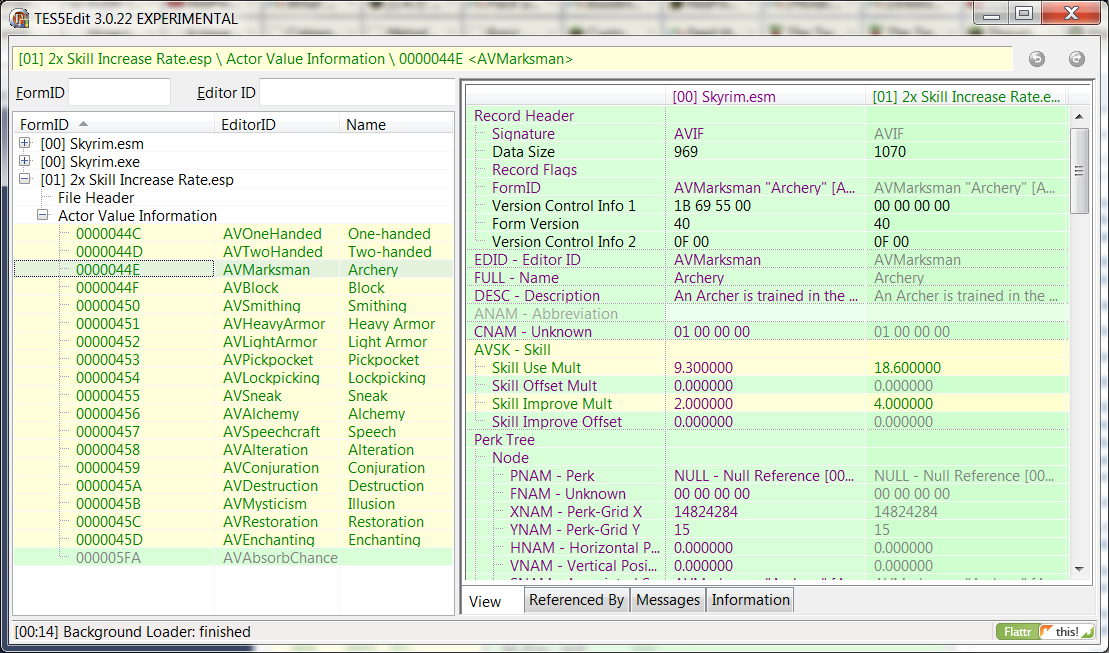 We've found a bug! And a novice modder who hasn't done their research.

The left pane shows the list of records that manage skill data. The right pane shows two yellow-highlighted lines: those are the changes the mod makes compared to the base game. You can see that Skill Use Mult and Skill Improve Mult are double their original values.

What we should be seeing is Skill Use Mult being double what is listed in Skyrim.esm, but Skill Improve Mult being left alone. As we can see on the UESP article on Skill Levelling, the first is the actor value that controls how much XP that skill gains when you use it, while Skill Improve Mult determines how much XP you need to get to improve it to the next level. What this modder has done is double the amount of XP you get each use, but then also doubled the XP you need to reach the next skill point! Net effect: this mod has zero effect on skill levelling.

(Also notice that entry for AVAbsorbChance with the light green background without the selection dashes at the bottom in the left-hand pane. Green means "no change". That means their mod has a "dirty" change, where it duplicates the base game value without meaning to. This is a major source of bugs and unintended mod conflicts, since when other mods are legitimately intending changing it this mod just changes it back to default for no good reason. Another sign of a new modder. It's very easy to do accidentally, and sometimes due to bugginess the Creation Kit itself inserts dirty records when you save out a mod, but experienced modders learn how to check for this and clean their mods before releasing them.)

This mod would be easy to fix given the tools and knowledge (in fact, I can fix it with just a few clicks in that TES5Edit window I screenshotted), or re-created properly from scratch (since it's only a few clicks in the Creation Kit), but teaching either is beyond the scope of a Q&A answer. It would also leave the modder without feedback and the others downloading it afflicted with a mod that is both ineffective and has dirty edits, so the better course of action is to comment and inform the modder of the error. They do have the tools to fix it, and can do it at the source so everyone can benefit from a functioning mod.

Not the answer you're looking for? Browse other questions tagged the-elder-scrolls-v-skyrim pc mods or ask your own question.

18
How do spells affect skill leveling?
14
What is the best obtainable gear in Heavy Armor, Light Armor and Clothing?
3
What perks should I get for a Nightblade character?
9
How does the game know when to increase the one handed weapon skill?