Why is my ship taking the scenic route?

So I've found that you can examine the route that ships are going to take by holding the right mouse button down. I would have thought I could send my ship straight there, why is he taking a three turn route instead of a straight shot in two turns? Is there anything I can do? 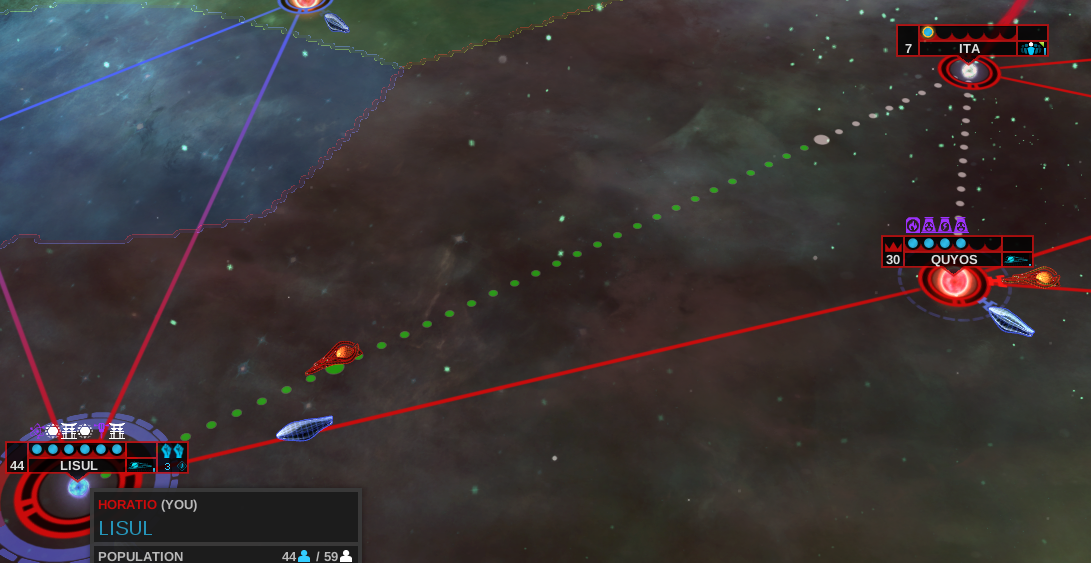 I'm not entirely sure how you ordered your fleets, so I'll throw a bunch of fleet movement facts out and see if any resonate.

Usually the situation is inverted and the String Travel is the "scenic" route, so my usual calculus got really tripped up by the picture. Herp and derp. In those situations, it's possible that the scenic route will be travelled more quickly than the "direct" intersystem travel (green arrow number), despite the longer distance. Your ship actually figures out the fastest path to its goal when you give it a movement order, so in that case the string path was faster. Paths can have a mix of Strings, Direct Travel, and Wormholes, depending on the geography of the galaxy.

Second, on orders: As noted, you can force Interstellar travel with Ctrl + Right Click, in case you want to bypass a particular system (such as flitting around a fleet too large to engage or opening new fronts). Direct Travel also allows one to pass through Influence borders, the colored auras emanating from planets, unlike String Travel. Certain diplomatic situations cause Influence to act as an impenetrable String Travel barrier. You can string together orders with Shift + Right Click, so you could have manually created the order to move in such a way with Ctrl + Right Click on Ita, Shift + Ctrl + Right Click on Quyos.

Conclusion: Excluding the research possibility and excluding that you did this manually and forgot about it, the pathing would seem inefficient.

Not the answer you're looking for? Browse other questions tagged endless-space .

45
Why can't I travel between these systems with wavy connecting lines?
4
Why can non-treaty players fly through my space?
5
How come the game doesn't end when I lose?
3
Why aren't all trade routes active?
7
Where is this Unexpected Event taking place?
4
If multiple systems have an available trade route, which one gets the route?
7
How does the dust reduction for the distance from empire work?
2
Why don't my industry conversion techs work?