What is the best Protoss counter for mass Stalkers?

I had about 5-6 carriers against 20-25 stalkers, and my carriers went down too fast. I did take out most of his army, but he can regenerate it much faster.

So the Protoss army is surprisingly well equipped to deal with Stalkers, and if you're scouting early heavy Stalker play (eg he has only 2 Zealots, 4 gateways and maybe a Twilight Council), awesome, just massing any of these and you win. But what if you don't?

Its very easy to fall into the trap of: Unit X would be really good right now, without realizing: to build the 20 or so Zealots I'd need to beat his 25 Stalkers I'd have to get 2000 minerals and use 4 Gateways 5 times (ie. 3 minutes of building or 190 in game seconds). Ok, so if you have 4-5 Carriers and you scout mass Stalker, that's not an option. So what can you do?

I'm going to ignore better scouting for the moment (because there is no feasible upper limit on how much scouting you can do) and focus instead on:

Carriers have a Sight of 12 and an attack range of 8. This may feel kind of weak until you realize two truths: Carriers can attack while moving, Interceptors have a range of 14. Its these to advantages you're going to have to use to beat down the Stalkers. To do that you're going to need to engage (attack) and then quickly run away while your interceptors continue to engage. As the Stalkers engage your Interceptors your Carriers will move far out of range of the Stalkers, preventing easy focus fire. Don't forget to build more Interceptors as they tend to die. (You can even auto-cast building interceptors so you don't have to micro-manage this aspect.)

If the Stalkers attempt to engage the Carriers, your best tactic is to retreat over cliffs. While Stalkers can blink down cliffs easily, they cannot blink up cliffs unless they have sight. This is key, as your Carriers only provide sight of themselves while attacking, not of the ground under them. On a map like Kulas Ravine this can be deadly.

Since you do need a vary large Stalker force to deal with Carriers, the longer you can delay him with the Carriers the more easily you can build up a decent force of Chargelots, or Immortals (or something deadlier). So your goal with your Carriers is to do as much damage away from your base as possible. I find the best way against most people is to attack at their main. If they don't have great scouting they will worry that your main is well defended and it'll keep them in their base, buying you time. Most mains have great places for Carrier micro, just look at the main on Steppes of War: 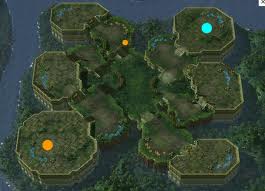 Is there any explanation for this map other than Blizzard wanting you to be vulnerable to air? Put two Carriers on either side of his base and attack in turns. He'll ping pong his units back and forth. Even if he does split his forces you can just back off and attack his natural. By the time he has a solid defense against this you can easily be sitting on an Immortal/Void Ray army (I want you to think what this would do to Stalkers... especially after the recent Void Ray buff)

Problem 1, he has a bigger army than you. Even considering 6 carriers vs 20 stalkers, the stalkers cost more. If you went straight to carriers you teched too fast.

Second, Immortals rip apart stalkers unless they can abuse blink to get on the high ground. 1 Immortal per 3 stalkers should be plenty. The blink aspect can be partially negated by having an observer to give you vision. (unless they have detection as kill it)

Alternatively if you're going carrier then you're likely to be low on gas, so zealots with speed can also take out stalkers pretty well. If they don't blink micro then I think 3 zealots (with speed) can take on 4 stalkers (maybe 2/3 ratio also works) and zealots are cheaper than stalkers. The numbers go in the stalkers favor more the higher the number is though, so if we're talking 40 stalkers and 30 zealots I'm not so sure, but if it's 20 stalkers and 15 zealots I think the zealots come out on top if they're not good with the blinking away. So Zealots + a couple carriers should make short work of stalkers. say you cut out 2 carriers for 6 zealots, you could have a closer match. Realistically you should be able to get more than 6 zealots because you should have excess minerals making primarily carriers. If you don't have extra minerals you don't have enough probes.

Zealots on the ground will help a lot as will immortals, both of which have been noted by others. But what you really want are the upgrades. If you upgrade shields and armor, those carriers will be far tougher to kill and will fare much better against stalkers. Whenever I go for carriers, I always do my best to max out the shield and armor upgrades because it hardens them significantly against the masses of smaller ground units.

All-in-all, an equal cost army with a little diversity like this should do well in a head-on battle. There's a reason you rarely see pros massing a single unit.

Considering the larger picture, the difficulty with a large Stalker army will often come from its mobility, especially if your opponent has Blink. Try to force a head-on confrontation with your diverse force, perhaps by attacking a key base. If you let that Stalker ball have free reign of the map, it will harass you with hit and run attacks and pay for itself pretty quickly.

11
What's the Zerg answer for Protoss Canons + Phoenixes?
7
Can protoss counter mass marines in the open?
4
Protoss Counter to Infestor w/ Infested Terran
12
What's wrong with doing a carrier rush?
12
Strong Protoss Anti-Air?
3
How do I harass Protoss with Terran before Stimpack is researched?
13
How to counter marine rush as a protoss on maps with huge ramps like Scrap Station?
16
What is an effective counter to late-game Protoss balls in TvP?
6
How do I combat mass Void Rays as Protoss?
3
Good practice for protoss player against MMM in PvT