How much more productive are Plantations than Farms?

The El Plantador DLC for Tropico 4 introduces a new building, the Plantation, that acts as a larger farm, for cash crops only. How much more productive is it? Does it produce more crops-per-worker, or is it simply a farm with a larger number of workers (it has up to 8 farmers, as opposed to a farm's 6)? Does it grow crops faster?

I have committed SCIENCE! to answer this question: a ten-year experiment to see who grows more tobacco.

This setup was a little ways from the rest of my city: 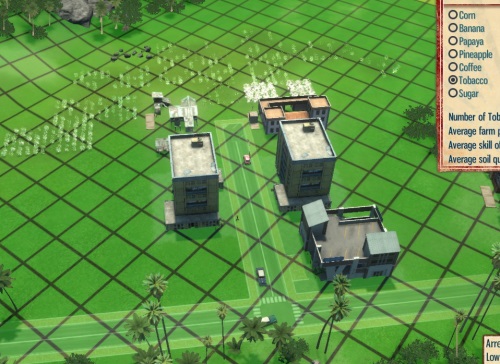 All of the farmers lived in those tenements. I hired all of the farmers as foreign experts, so they all started with about the same skill (10%-15% of maximum), and I raised their wages to 15 so that they wouldn't leave and find other jobs. One guy on the farm died during the experiment, but he was replaced fairly quickly by a farmer of similar skill from one of my corn-growing farms down the road.

This experiment was as fair as I could possibly make it; I scrapped an earlier experiment because the skill of the farmers and plantadors was completely off-kilter. One interesting note: vacancies are more likely to show up in the plantation than in the farm, because the game tries to have equal numbers of people working in similar buildings. So if a couple of farmers die, you're likely to see 6 people working the farm (its max) and 6 people working the plantation (2 people short).

The farm produced 6245 tobacco, and the plantation produced 10637 tobacco. (The precision here is awful, of course. Either number could easily be off by 300+ tobacco.) Building-for-building, the plantation produces 70% more crops than the farm, and takes up only slightly more space (for the additional crops).

Output per total cost: Because I love math too much, let's figure out the total cost per unit of tobacco. The 10-year cost for the farm is $5580 (including initial building construction), and the 10-year cost for the plantation is $8520. The farm's tobacco cost about 89 cents apiece, and the plantation's tobacco cost 80 cents apiece. This number will only get better as time passes, because you only pay those initial costs once.

Final farmer skill after 10 years' farming and no edicts: If you're curious, the farmers' skills varied between 50% and 85% after the experiment was over (probably due to their individual intelligence); most of them hovered around 60%.

Do plantations grow crops faster? Nope; they both got their first crops about the same time. The farm was maybe a month faster, but that's probably because the farm was closer to my city and thus the jobs filled up there a hair faster.

I've never been good at maths, but I am fairly certain your math to get 70% is incorrect...

Anyways it's a pretty significant increase in crops. So much so, that I am now restarting this scenario I am currently playing...

I'm not sure if it grows crops faster, but it grows more crops. Not only does it have more workers, it also has more fields.

26
Environmentalists are annoying me, how can I silence them?
15
Is the Bio Farm more productive than a regular farm, for a particular crop?
9
How can I get more citizens to educate themselves?