How can I disable the critboost visual effect?

All crit boost effects (kritzkrieg, crit-a-cola, frontier justice) in TF2 generate a very fancy particle effect applied on the weapon that's getting the boost. If you don't know what I'm talking about, here's a pic of the effect in action: 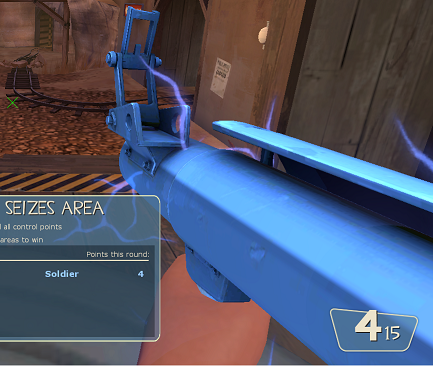 While it looks OK in this pic, I find it gets distracting added to the dozens of other particle effects you get in an average pub game, especially with the Frontier Justice (since it stays on indefinitely). More importantly though, it ends up being a CPU hog. My framerates drop significantly while I'm getting a crit boost, which is irritating since that's when you need the most precision.

My question is: How can I disable this visual effect?
I know that TF2 is highly customizable, I've installed tons of HUDs and skin mods, but I can't find anything on this subject. I think it's possible, cause you sometimes see customized explosion effects on frag videos.

Ideally, the weapon would just turn blue (or red) instead of getting all shinny. So I would still know the effect was there, but it wouldn't be so CPU intensive.

From two helpful people on the Steam forum, here is a list of particle removals and optimisations.

You probably want 'Direct X 9 crit boost file by itself', unless you know you're running DirectX 8 (usually in conjunction with a config). I think that it still removes the halo effect though.

For a more extreme solution, put the following code in your autoexec.cfg:

This will allow you to press the r key at any time to turn your weapon model off completely. Press the same key again to turn it back on. You may replace the first instance of "r" (not the one at the beginning of r_drawviewmodel) in the code if you want to bind this ability to another key.

8
What does the "Enable Glow Effect" checkbox do?
7
Is it possible to toggle ÜberCharge visual effects?
2
Disable balloons in Pyrovision / Pyroland
12
How do I disable time limit in TF2?
4
How long does the teleporter particle effect last?
5
This isn't the fast weapon switch, but how do I disable this menu?
2
How can I disable the Rainblower's Pyrovision effects?
7
How to disable map introduction screens (MOTD)?
1
Is it possible to disable the deathcam?
3
Can the server owner disable cosmetic items?