I have a couple of Mob Spawners surrounded by torches (thus rendered inert), and I want to try using them to farm enemy drops. What's the most efficient setup to automatically kill spawned mobs and collect their spoils?

Most mob farming techniques use a stream of water which collect all the monsters in the room to a central point, and then drowns them by pulling them underwater. Some other ways to kill them are:

Just as a note, most people just build enormous completely dark rooms (like this one) to farm mobs rather than using the actual mob spawner blocks.

Here are some screenshots from the link above: 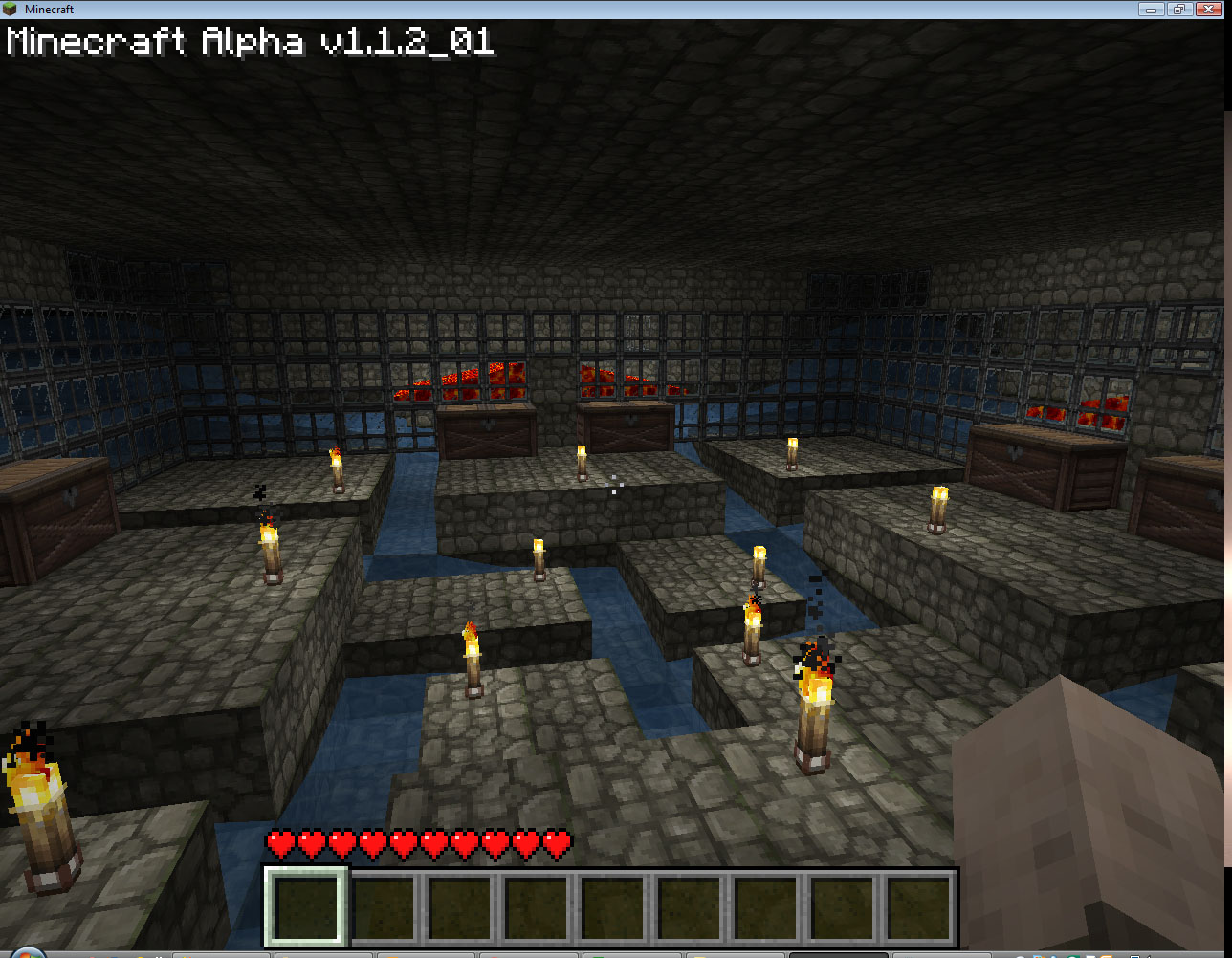 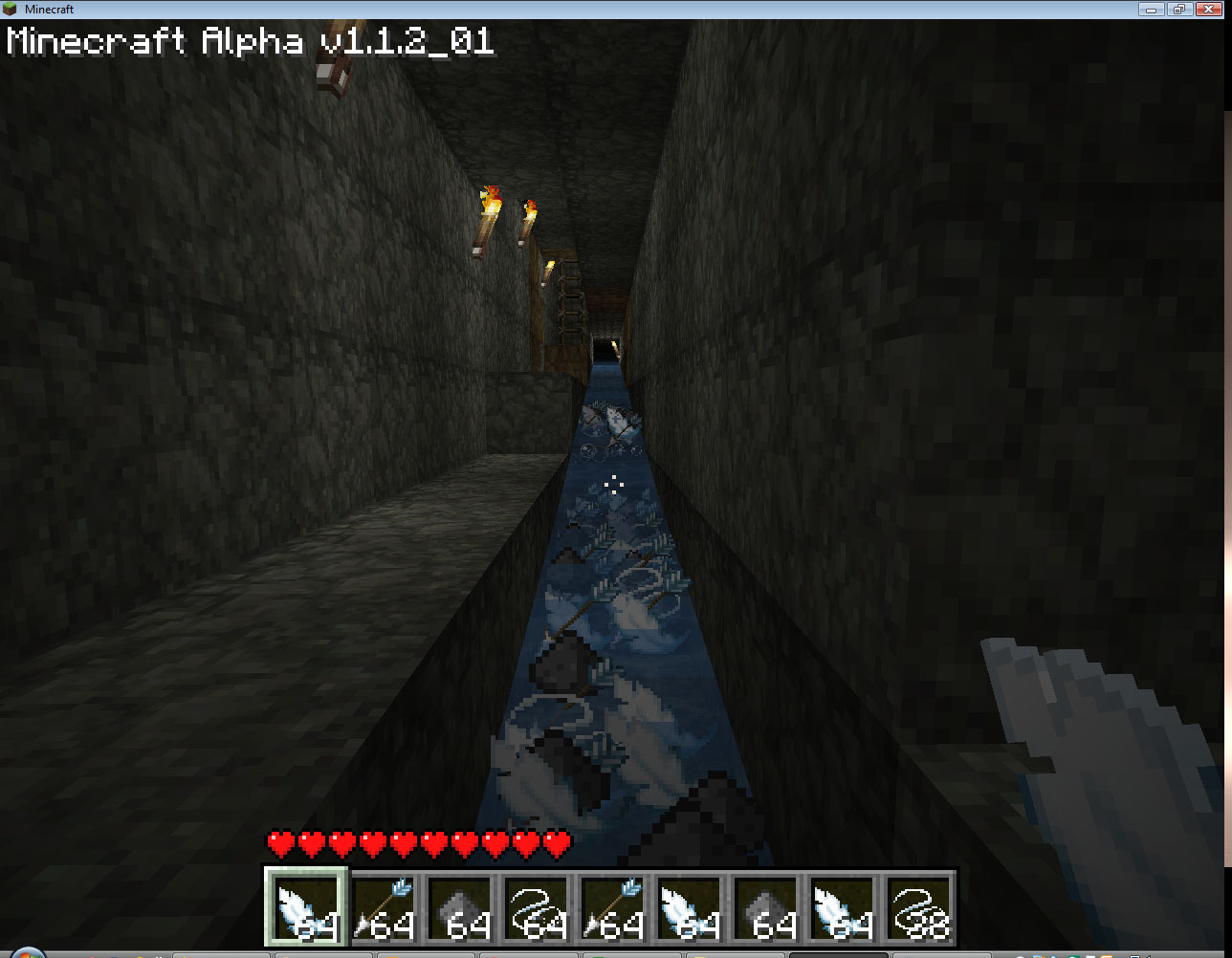 I found a really neat video a while ago of a Mega Mob Factory someone had made for farming Ham. I'm sure you could do the same with a mob of creepers.

This works on the same principle as most mob farms: it uses water currents to trap pigs and pull them underwater, drowning them. All of the spoils end up at a singular point below the structure, that can be accessed by a ladder.

The most efficient way I've found for farming items from zombie and skeleton spawners is to place a water block in one corner of the dungeon, a lava block held up by signs in the opposite corner, and a water stream carrying items out.

For spiders the previous design doesn't work because they can get pushed past the lava block and under the walls where they get stuck. Instead I dig the dungeon a bit wider, have water flowing from the walls to the center and in the center have a 3x3 hole with a cactus block in the center of the hole. The hole has to be at least 7 squares deep so that the cactus can remain below the rim even when fully grown and is 3x3 because spiders fall in easier than with a 2x2 hole. Under the cactus use water to get the items to a collection point, or just stand there if you like watching the spiders die. I suppose a column of lava would work as well as a cactus, but you'd have to make sure that the column was tall enough that any spider falling through spent enough time in the lava blocks to die and you'd need a lot of signs.

Make sure to light all the areas outside of the dungeon and that no light is getting in. Also make sure to keep your collection point close enough to the spawner for it to keep spawning while you wait. (According to the wiki you need to be within 16 blocks of the spawner.)

I've not done a comparison between the item drop rates of these compared to drowning traps, but I suspect that the items destroyed by cactus/lava contact are balanced out by the slower kill speed of drowning. If not, both of these could be modified to be drowning traps.

ERR: If you want to make a mob farm to collect drops, DO NOT use lava or cactus. Both can destroy items. I would suggest putting flowing water around the spawners, and then making a deep channel at one end, at the ege of the water so the water comes right up against the channel, but does not flow down. Then, put hoppers at the bottom of the channel and make an access shaft with a chest connected to the hoppers.

19
What is the quickest/easiest way to obtain gunpowder?
19
Any way to round up animals in Minecraft?
20
How does one make an Animal mob spawner?
11
Is the info in Minecraft Canary about a location that causes the most mobs to spawn still relevant?

5
Fastest way to clear out a large area down to bedrock?
2
Are mob spawners versioned?
5
What is more efficient - Liquid XP from OpenBlocks or Mob Essence from MFR?
8
Minecraft: Are light sources additive?
3
Best way (mathematically/scientifically proven) to arrange spawners in Minecraft?
5
Why is my mob farm not allowing me to grab XP orbs in Minecraft? How can I fix it?
0
Stopping bats from spawning in vanilla minecraft--Without killing them
19
How do I farm creepers for XP without them exploding?
1
Minecraft 1.14.4 villager won't collect 8 seed packs