What are the benefits of having the Nissan Leaf DLC?

What are the benefits and drawbacks of the free Nissan Leaf DLC running in your city? Are they pure park n rides? Or are they more like a park? Do citizens commute there only from their homes? Do they decrease land value like a bus terminal does? Who drives there: workers, shoppers, students, etc?

I read the initial information in the FAQ about the Nissan Leaf but I would like some more detailed input from somebody that has studied their operation more closely.

I did some studying of the daily activity of the station. Here's what I found. (Note: Let me just completely debunk park and ride its nothing like that). 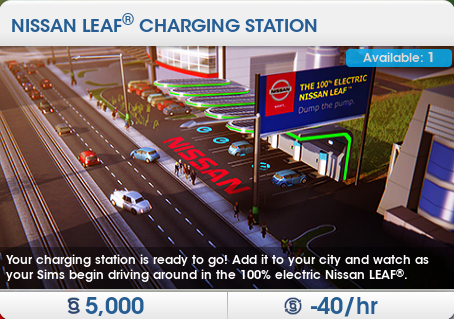 noisysplatter is correct is saying it functions like a park. There are some differences though.

The relatively cheap cost and operating price mean you can't go wrong placing it. The only thing which I do not know how to test is the functionality of the happiness wave that stretches out to your city. I assume is it a daily "tick", kind of like homes near a garbage dump will lose some happiness every day from being next to it. This would prevent you from placing the stations for the initial happiness boost then shutting them down to save the operating cost. Placing the park has dots along the road, similar to a low-wealth park. I am not sure if THIS is the range of the daily happiness "ticks" or your entire city gets it, I have no easy way of testing this.

Verdict: A no brainer to place these at the overpowered price-to-benefit ratio.

The only benefit I have been able to work out is:
It makes people happier that are near it.
You will see Nissan Leaf cars on the road.

Does not increase land value.

It is merely the equivalent of a low wealth park with a disproportionately high happiness to size ratio.