How does the Hardline Pro perk work?

I've heard a good amount of chatter about the Hardline pro perk, but I still can't wrap my head around how the pro perk works.

With Hardline Pro, when you get a care package, does it prompt you to see if you want to keep it and get another one? Do you always get a better one the second time or is it random?

When the care package drops you can see what is in it like normal. If you don't want what's in it you can tap X twice to reroll it.

Hardline reduces all killstreak requirements by one. Its pro version allows the player to "re-roll" any killstreak crate by double-tapping the action button, which will change its contents randomly. A crate can only be re-rolled once, and will always change its content. While not yet released, a patch announced on December 4, 2010 will restrict Hardline Pro's re-roll to Care Packages only. The SAM Turret, Sentry Gun, and Valkyrie Rocket crates will no longer be re-rollable, greatly limiting its usefulness.

The chances of getting something good are slightly better though. Source

There is a good video on youtube covering the odds of getting something better when re-rolling a care package. The Valkyre Rocket is the break even point. 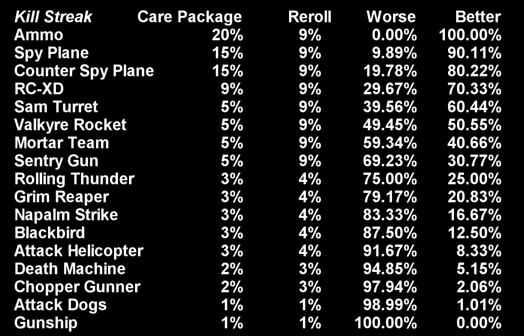 Not the answer you're looking for? Browse other questions tagged call-of-duty-black-ops or ask your own question.

5
How does the attack dog killstreak work?
1
Question about Hardline Pro Challenge
2
How does HQ work in Black Ops?
1
What perk challenges are easiest to make "pro"?
3
Do I need to have a perk on in order to get credit towards a pro perk?
4
How does the scoring work in Black Ops?
2
How do you get the "pro" options for the perks?
10
What determines if a player will prematurely die while downed with second chance?
2
Do the Red Dot, Reflex, or ACOG sights work with Sleight of Hand Pro?
2
COD Black Ops Multiplayer: Did anyone try laying down a claymore ON the converyor belt in radiation?