What's the difference between total, current and relative strength?

When you hover over a person in their dynastic tree, you will be able to get an idea of how many troops they can summon. There are several numbers, but I can't figure out which I should look at.

Now, what I think, is that the total levy is how many they can theoretically raise, when their garrison and levy is full. The current is the number of troops they can currently raise (maybe they've just been at war, or some territories are recently conquered).

The relative strength I don't know. I thought it had to do with how many of those troops are currently unraised, however in this example the good King actually has a standing army getting their knickers handed to them by some helpful rebels.

Your assumptions on total and current are correct.

As for relative strength, it is the size of the levy (total or current) as a percentage of the top liege. So it's always 100% for the top guy. It's usually not the case for his vassals. And if it is...he's in for some trouble =D 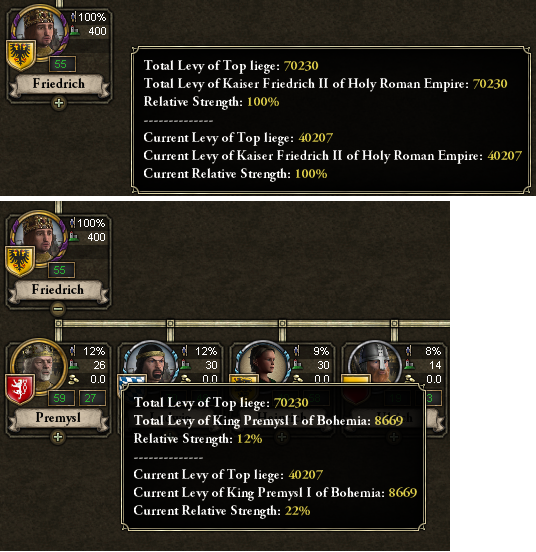 15
I dislike the current head of my dynasty, can I arrange an accident for him?
20
A vassal declares war on my heir. What to do?
9
How does Crusader Kings 2 calculate levy percentages?
12
What's the benefit of destroying titles?
2
What's the life expectancy?
3
What's the pro of creating a theocracy?
2
How can I easily consolidate dynasty holdings under one ruler?
7
What are the benefits and disadvantages of having multiple religious heads as landed vassals?
3
Why does city tax value differ between title screen and county screen?