How do I perform the basic move combos in training mode?

In Street Fighter X Tekken there's a practice/trial mode. The first few trials are special moves which, ironically, are easy to do. After that come some "basic combos" which seem to be a lot harder. The first one I passed by sheer luck (button mashing), but the next one is more challenging.

Unfortunately the trial mode has no explanation other than an indication of the moves to be performed.

Take for example this one (Zangief trial #12):

Or, put in a screenshot: 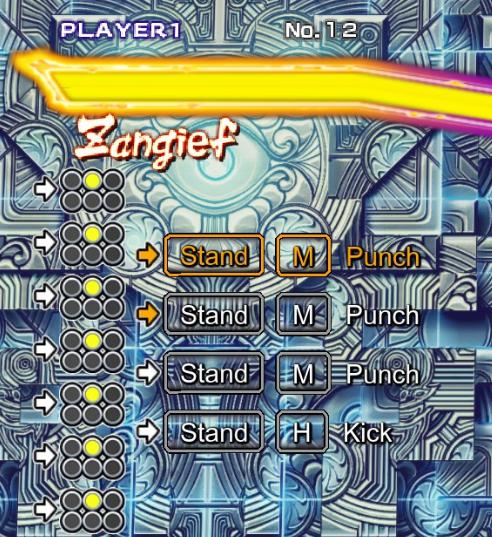 How should you time these moves? I've tried several things to no avail:

At random I sometimes fill the first two rows, but I can't really find the trick behind these combos. Can anyone explain how to complete these?

This is the PC version, using an Xbox 360 wireless controller, should it matter.

The combo in the example is a link. Links are performed by executing a follow up move as soon as the first one finishes. They cannot be performed by cancelling or buffering, so they are very timing dependent and mashing is unlikely to succeed.

To put a concrete example: Ryu's crouching medium punch (c.MP) has a 4 frame start up and is a +5 frame advantage on hit. Looking at that data you know that if you hit an opponent with a c.MP you can immediately perform another c.MP and it is guaranteed to combo, if and only if you execute it within the next frame. To put it in perspective a frame in Street Fighter 4 is 1/60th of a second, which means linking can be very hard to execute.

Unfortunately there are no easy methods to learning how to link other than learning the specific timing required. But the basic idea is to perform a move and as soon as the recovery finishes execute the next one. With this in mind you can determine whether you are pressing the button too quickly/slowly as long as you don't mash.

In essence only 3 things can happen:

Based on the information above you can adjust accordingly and improve your timing.

Some people count or keep beats in their heads to help with the timing, but this is all up to personal preference. The only in-game system that could be used to improve the consistency of linking is to plink which you can read more about here.

Not the answer you're looking for? Browse other questions tagged street-fighter-x-tekken or ask your own question.