Should I ever move my first settler?

I was reading an article about the guys at Firaxis arguing about whether moving your first Settler is EVER a good idea, and it got me thinking.

I have always been a "don't move the settler" kind of guy. But according to the article and some basic simulation by one of the devs, it can be better to spend a turn moving to a better spot. But it might not always be worth it.

So, my question is, what kind of things should I be looking for in order to make the decision to settle vs spend 1 turn moving to a better location? If I can see the coastline, should I move over to it? Should I always spend a turn moving if I have less then X luxuries? Or If I have less than Y food bonus resources?

That Escapist article brings some data to the table, so let's take a look at it. In the Escapist article, Ed Beach (the Firaxis lead designer) posted an image of his test results, which isn't really called out in the article: 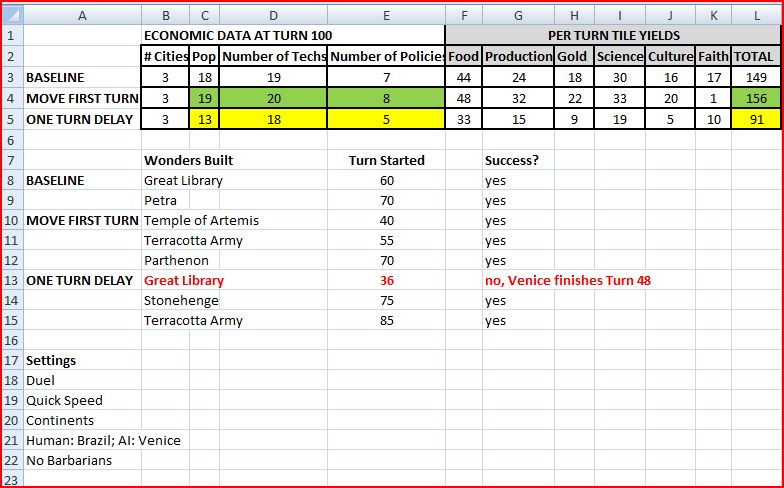 There were three experiments described in the article:

If you look at the data, the "baseline" and "move first turn" results are pretty close. It's 149 total city output for the "baseline" against 156. Skipping your first turn is solidly behind, however. Further, there's not a lot of data here - it appears to be a sample size of one game, which doesn't really scream "statistically significant." Also, it looks like the games diverged quickly afterwards, so there are a lot of variables at play. Did workers improve the same resources? What was built in each city in what order?

From the data presented I can't really draw the conclusion that using your entire first turn to move is significantly better in all situations versus settling that turn. I can posit that your first turn is important, and should not be wasted.

Having talked about the article's results, I'll give you my strategy.

I will tend to move and settle without hesitation if I think I can get a better position with half my settler's first turn. When it comes to using that turn completely to move, that's a trickier proposition.

You can't do a lot of scouting in the first turn under the default circumstances - you're likely to have one combat unit that can make a move and reveal a few tiles, but it's generally not enough to expose the entire city working radius plus some to reveal a potentially better starting location.

My suggestion would be to consider a few things:

In these cases, I'd probably suggest moving. However, in most games I've played, I could balance the two and get the best of both worlds - a better spot than I spawned on, and the additional benefit of that early turn post-city founding.

There are a few key reasons that you would want to move and delay a turn or even two.

These have different benefits in both the short and long game. Now I'm speaking in the context of quick speed games and particularly for multiplayer but the basic math applies across the board for the most part it just depends on how much impact it ends up making in the long run.

For example, it is typically always better to spend the turn to settle on a hill. Assuming you have at least one other production tile, you start the game with 3 hammers and that drops the training time of your scout by a turn. That move pays off on turn three and you only really lose one turn of science which is easily accounted for within the first few turns turns. I typically don't worry about moving closer to luxuries because as long as I'm next to one luxury item, future cities will pick up the difference.

Coast, river and in part better tiles are all long plays. You're betting on the added buildings and strategy paying off in the end, and depending on the tiles in question and your opponents it's usually beneficial (Coast particularly because of the military opportunity and cargo ships).

As for moving to get better tiles because of the limited knowledge you have that early I find it's a huge risk for little reward. The only reason I would ever do it is if I'm stuck next to a big swath of tundra or flat desert and there's just no way I'll be competitive if my capitol is in that area. In that case I move 3 or 4 tiles. Just enough to bring the edge of my borders within range of useful tiles.

A totally different approach would be you restart the map creation process until you are in a location that is suitable!
You can do this on your very first turn.

33
How do I guard a worker or settler in Civilization V?
7
Anything to do upon first contact?
4
Units don't move until end of turn
18
Is there any reason not to settle on a hill?
9
Should I take into consideration the distance of trade routes?
6
Can you capture an enemy settler before they settle the capital city?
3
Do barbarian camps ever stop spawning?
10
How should I use Merchants of Venice?
1
Civ 5 BNW: why are city states far tougher than major civ cities on settler?
4
Is there any way to make a unit, with a multiple turn move queued, move immediately?