How does culture work in Civilization 4?

As a complete newcomer to Civilization starting with Civilization 4, I really don't understand culture at all. I can't find any online resource explaining how this works.

Does increasing the global culture rating (at the expense of gold and research percentage) help cities expand? Does it help in any other way?

One of my cities defected to another civilization - was that a problem with culture?

Can anyone help a newcomer get started?

If you hover over a square, you can see the current balance of culture in that square just above the unit picture. Whoever has the highest total is the current owner of the tile. If your culture that reaches that square is higher than the culture of the other civ, your percentage will grow over time. 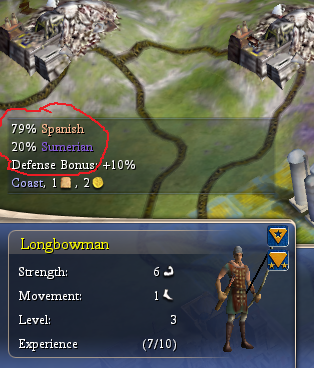 In your own cities you can also see a percentage of culture. If you captured the city from someone else, it will start out heavily waited towards them. The higher the percentage is for opposing countries, the more likely a city is to defect. You can't see a percentage of culture in cities you don't own, but it works similarly. If you have significantly higher culture output near an opponent's city than they do, you can eventually get that city to defect to you without warfare.

You need to be careful of capturing a city that is well surrounded by an opponents cultural borders, as it will likely defect back quite quickly. In this situation it is often better to just raze the city instead. You can decrease the likelihood of defection by stationing additional units in the city, but this often isn't enough, and if the city defects you lose the units too. Generally, the best strategy is to capture cities on the outskirts of their territory first, where they will have less culture output. Or be prepared to capture all their large cities in rapid succession. Also think carefully before sparing a civilization, as destorying the civ completely insures that your cities can't defect back to them.

As the culture of a city increases, the borders around that city expands. The steps are 10 (fat cross), 100, 500, 5000 and 50000 (legendary). If there's a city of another player near to one of your cities, the cultural influences on a tile are shown as percentages in the tooltip in the lower left corner. So, culture is more important for cities near the border than for cities deep inside your country.

If your influence is above 50% in a foreign city, there is an increasing chance of riots. After the third riot, the city turns to you. This is a lot better than capturing the city in a war, because no buildings are destroyed and all cultural buildings now produce that culture for you!

If three of your cities manage to reach legendary culture (50k) each, you win a cultural victory. That's where the global culture rating is for. If you spend 100% in culture you can bring your three cities over 50000 culture in 50 to 100 rounds, depending on the buildings and commerce in your cities (broadcast towers, cathedrals, mosques etc. are very important, sixtine chapel also helps a lot). Keep in mind that you can't research new technologies during this time and your opponents will get a technological advantage and might attack you in order to prevent you from winning the game.

3
How long does it take to play civilization to the end?
9
How much culture is required for a city to switch?
5
Using the culture slider?
8
How well does Civilization 4 handle automation of workers?
9
Civ IV Best Production Choice In Specialized Cities?
7
How do I take over a city with culture?
5
How do I use a work boat in Civilization 4?
7
How to get a build recommendation for city after it was building wealth/research/culture?
1
Does the Civilization IV exe contain Beyond the Sword updates