How do I unlock the hidden character "The Lost"?

In the Binding of Isaac: Rebirth, how do you unlock The Lost?

I saw a video of someone dying with certain characters in certain places but i dont know where and how.

This is my reference video

The Lost is meant to be the most secret and elusive unlockable character in the new Binding of Isaac.

The short version, with just the instructions to unlock the character, is under the spoiler:

You have to perform a sequence of specific deaths with 4 different characters at specific locations:

- Isaac has to be blown up by a Mulliboom in the Basement/Cellar;
- Maggie must blow herself up with a bomb in the Caves/Catacomb;
- Judas has to die stomped by Mom's foot in the Depths/Necropolis;
- Azazel must be killed by Satan in Sheol. The fight after the Fallen is guaranteed to work, it's still unclear if the second stomping phase works too.

The deaths have to happen in this order and any mistake (i.e. dying in another location, or with another character) will reset the sequence, so you'll have to start again with Isaac.

There's anyway a longer explanation tied to the character. The sequence of steps to unlock the Lost is not explained anywhere in the game and requires a long process to be discovered.

The first step to the discovery starts with the Missing Poster trinket. This item apparently does nothing in terms of gameplay, but when dying in a Sacrifice Room (the empty ones with a single set of spikes at the center) while carrying it, you'll get a game over screen with a puzzle piece replacing the cause of death. 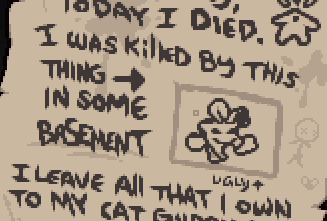 These 4 puzzles, when completed, show the game over screen for the 4 characters and their cause of death. The task of the player, at this point, is to recreate these deaths with the appropriate characters.

Replicating the deaths is easier said than done. As said before, apparently it has to be done in a specific order to work and anything getting in the way resets the process. Some specifics are still unclear/being researched, but this are the best guesses at the moment:

If you manage to successfully complete this task, you'll be greeted with this screen: 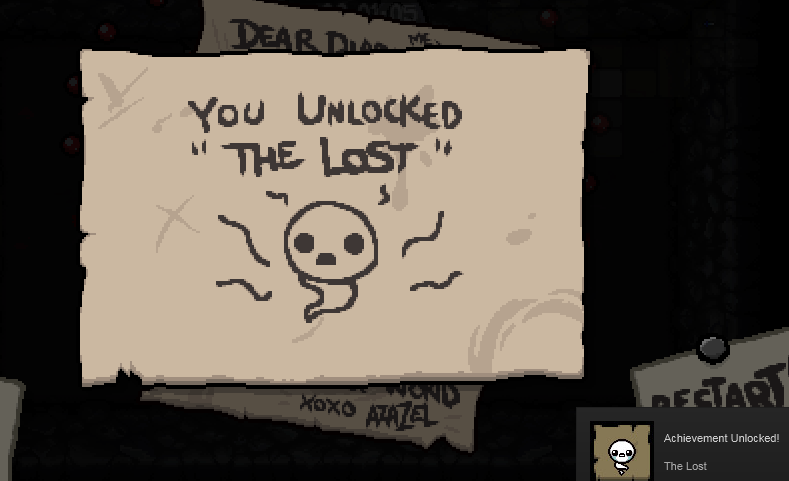 and you'll have a new character waiting for you at the starting screen.

Source: all the images and part of the informations are taken from this reddit thread. It started as a speculation/investigation thread about the puzzle pieces, but sadly the unlocking method leaked after being datamined, while the investigation was still running.

Possible way to do this from CobaltStreak's stream:

You need to die as isaac to mullibooms in the basement, maggy self bombing in the caves, judas to moms foot in the depths, and azazel in the second form of satan (either satan or his hooves, but not the fallen) Not sure if anyone wants to test this or not."**

This was later proved several times to work and was the official way of unlocking "The Lost".

Kappei's answer is a great explanation of the process involved in unlocking the Lost in the base game.

If you download the Afterbirth DLC, there is actually a much simpler way to unlock the Lost. All you have to do is kill yourself in a sacrifice room while holding the Missing Poster trinket.

Not the answer you're looking for? Browse other questions tagged achievements the-binding-of-isaac-rebirth .

2
Does the Cellar count as the Basement?

8
What's the difference between Normal mode and Hard?
10
Does invulnerability work in Sacrifice room?
2
Move non-steam edition saves to steam edition game?
1
What do I get for not making deals with Satan?
3
Invincibility in "The Binding of Isaac Rebirth"
4
Are the Challenge levels preseeded, or just the items I spawn with?
4
What is the maximum possible number of lives?
9
How does Apollyon's starting item "Void" work?
3
Unable to get into the chest with another character