Difference between PVP and sPVP

I was browsing some website about Guild Wars 2 and I saw that GW2 uses sPVP, but I don't know what it means and what are the differences between PVP and sPVP, what is the difference between GW2 and others mmorpgs?

If you take a look at the wiki page: http://wiki.guildwars2.com/wiki/Structured_PvP

It states that Structured PvP, or sPvP is an additional PvP mode that allows players to battle on an even footing. You'll have access to a separate PvP build, so everyone has the same options in terms of attributes, skills, traits and equipment. It is played out in a map specific to sPvP, with objectives. It is also world-independent, meaning you can be pitted against players from any world.

Regular PvP, or PvP, is simply engaging in any kind of player versus player activity with your regular character's build. For example, World vs World or activities like Costume Brawl. In this mode, everyone uses their own acquired equipment, skills and traits, rather than having access to all of them unlocked, like in sPvP.

sPvP stands for Structured PvP, and is the standard PvP mode.

All players, regardless of level or gear, receive stats equal to those of a level 80 character with exotic gear. Rather than being spread between gear, total stats are included on an amulet of the player's choice. One superior rune is applied to all six armor pieces, and sigils can be chosen for each weapon. Underwater combat is not included, so there is no underwater equipment. All class-specific skills are available, and all other skills are restricted (including Mistfire Wolf, Antitoxin Spray, and racial skills). The first 12 traits of each trait line are available, and the 13th is available if it has been unlocked. 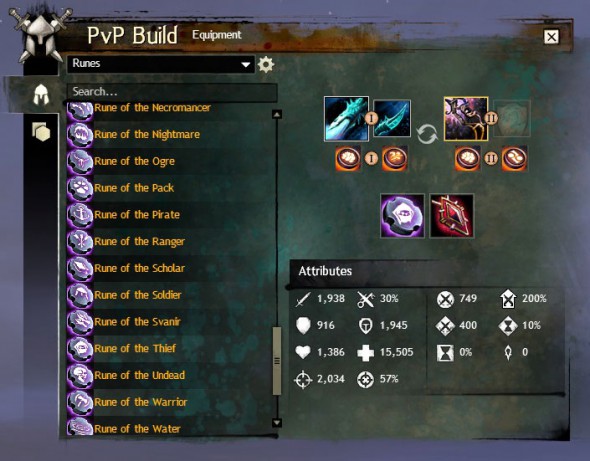 Coins and rank points are rewarded for the completion of each match. PvP Rank is earned by accumulating rank points, and provides rewards each time a new rank is reached. Every 10th rank rewards the player with a new finisher. The player can also select a PvP Reward Track, which will provide additional rewards based on rank points gained.

The Heart of the Mists serves as the sPvP lobby. sPvP consists of three types of matches: ranked, unranked, and practice.

Practice matches (often referred to as "hotjoin") include custom arenas as well as automatically generated arenas. These matches do not ensure balanced teams. Players can join and leave practice matches as they like, and can even switch teams if the other team has less players. Teams can consist of one to ten players, depending on the specifications of the arena.

Unranked arena matches require players to queue in order to join. The player's party will be prompted to join the queue with the player, allowing groups of up to five to join together. Players must wait in the Heart of the Mists while queued. These matches always assign five players to each team. Once a match is found, all players must confirm that they are ready. Three maps are randomly selected and voted upon, then a map is selected by a weighted roll based on those votes. These matches count as tournament matches for the sake of achievements, but do not affect leaderboard rankings.

Ranked arena matches are identical to unranked matches, but do affect leaderboard rankings.

PvP can refer to any situation where players fight or compete against enemy players. This can include:

World vs World, or WvW, consists of weeklong matches between three worlds. Unlike sPvP, players use their PvE builds and gear. Players who are below level 80 are upleveled, meaning that they have their base stats adjusted to be stronger, but are still limited by weaker gear.

PvP Activities each take place in their own arenas and provide the player with specific skills to use.

Costume Brawl and Belcher's Bluff can be initiated anywhere in the PvE world, and replace the player's skills with their own. These may or may not be considered "activities", but the distinction is inconsequential.

I do not play GW2, but I have read something about sPvP before. The 's' is for Structured, and it is when battles take place on smaller maps. It's quite similar to WoW's battles.

8
How do I create a guild in Guild Wars 2?
4
How are Sink and Float used effectively?
4
How can I learn to be competitive in PvP and WvW?
5
Which chest has the best loot?
1
How does Guild Wars 2 reward teamplay in combat?
8
How binded are "Traits" and "Playstyle" of characters in Guild Wars 2
7
What are the gameplay implications for each of the Digital Deluxe items?
0
What's the difference between Stability and a Stun-break?