How do I design an efficient exit from a large one-way road?

I decided to try out sandbox mode to be able to experiment a bit more. This meant that my first residential district was quite a bit larger than usual as I had access to high-density zones from the start.

This lead to the traffic situation in the following image (click on it for a larger image):

The two large parallel roads you see are just elongations of the exits from the default highway you start out with. All the cars stay in the same lane when exiting, backing up far into the main road. Most of them need to go into the residential district on the right, and they merge into the rightmost lane of the large road the exit leads to.

I understand that the cars take the optimal lanes no matter the actual traffic in the game, but I still don't see how I can efficiently solve my traffic problem here. What am I doing wrong, and how do I design a better exit?

This allows for numerous entry and exit points to the highway without making a zillion intersections on your main avenue. The frontage road also "filters" the traffic to closer to where they actually want to go instead of having them all go in and out at the same place.

Here's a screenshot of one I made in game: 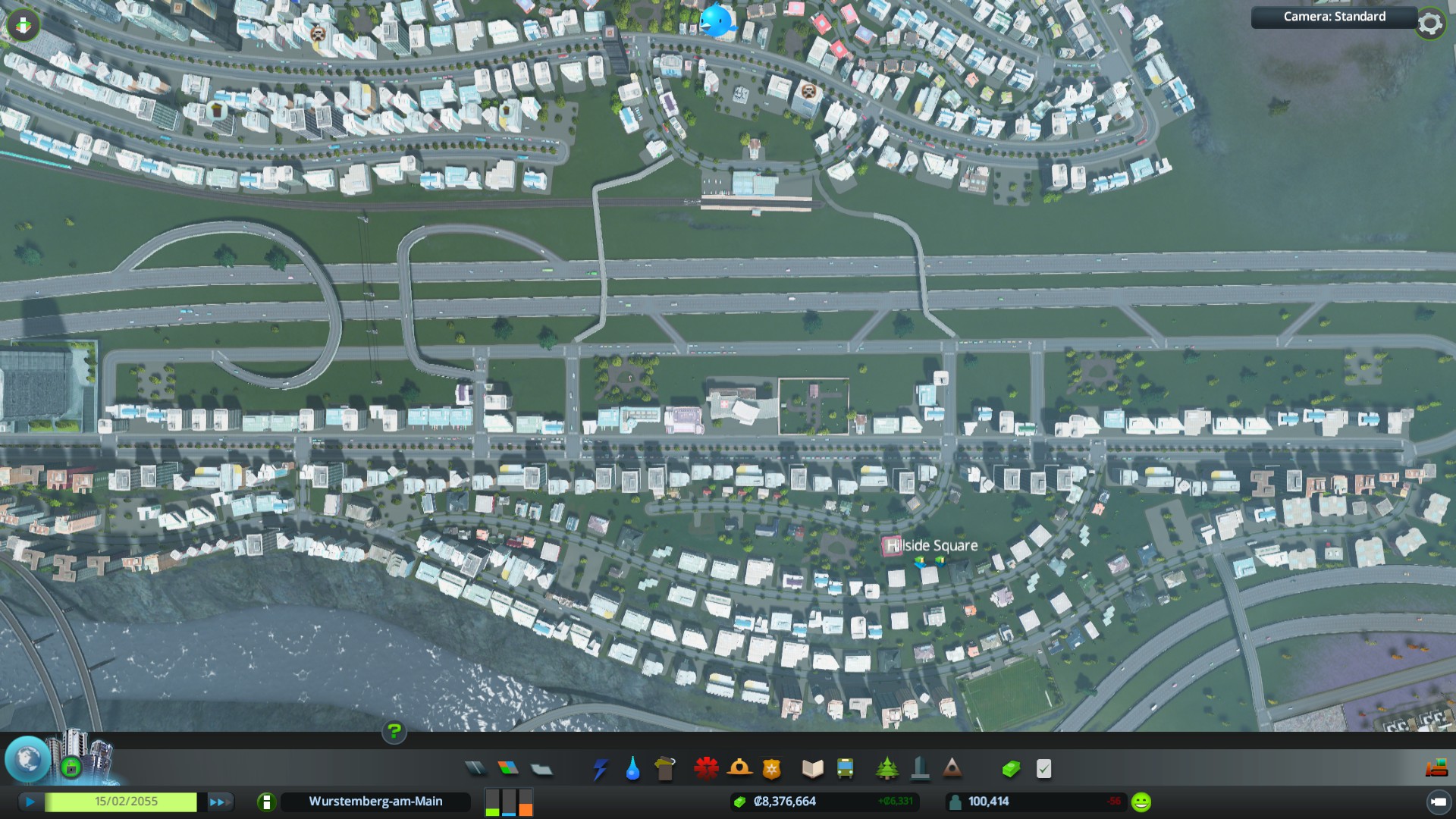 It's a bit goofy because I didn't have room to run on both sides of the highway but flows very well.

You need to spread this traffic out. This could involve building more entrances, moving this one, infinite roundabouts, forcing traffic in from another direction or something else. In terms of fast and easy fixes, you need to prevent cars following that single route and force them to spread out in some way. The easiest of which is by using one-way roads going against that flow. Note that with a patch that arrived yesterday you can now update between two-way and one-way road, so this is now easy to do!

Something like this (don't have the game on this machine so I've annotated your image): 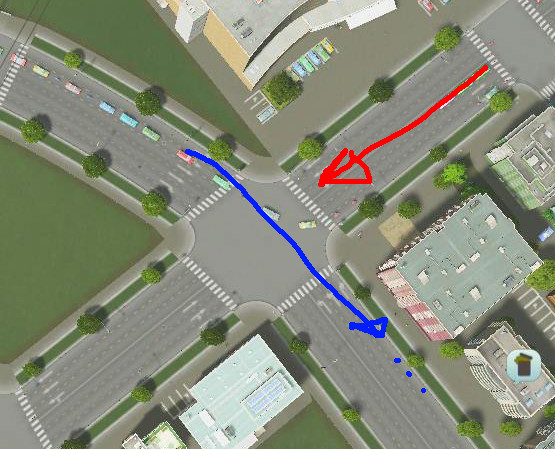 Now the left 3 lanes of traffic on that junction will be able to go straight forward - hopefully traffic will start using more than the one lane, but that'll depend on the next junction. You could make both incoming roads one-way towards the junction, then all 6 lanes of the highway connection will be straight-forward. Or, you could also make all the roads at that junction one-way (so they cross, starting as the image above) - this would reduce the wait-time at the traffic lights.

Alternatively, if you make the side road they are aiming for into a one-way in the direction they're entering from, this will allow the right-most 2 lanes of its 6-way to turn right (instead of the current 1 - see how the middle lane is straight only at the moment) and you might get two-lanes then also turning left at the entrance. Whether or not this might work will depend on where the cars want to turn after that, but it might be worth a try:

Finally, you could make the side road they're aiming for into a one-way in the wrong direction, preventing cars from taking that direction. They might spread out depending on where other entrances are, but without know what the rest of that area looks like I can't say what effect that could have.

62
How do I connect the initial highway to my six-lane road?
9
Show the direction of one-way roads
14
How do I transfer garbage from my full landfills to my incinerators?
10
My highway is backing up. What can I do?
8
What impact is there to bulldozing housing?
2
In cities Skylines, can two-lane one-way roads be upgraded to three-lane one-way highways?