How can you get away with your sixth murder?

This is the sixth room of the How To Get Away With Murder section of the new CotN advanced techniques tutorial: 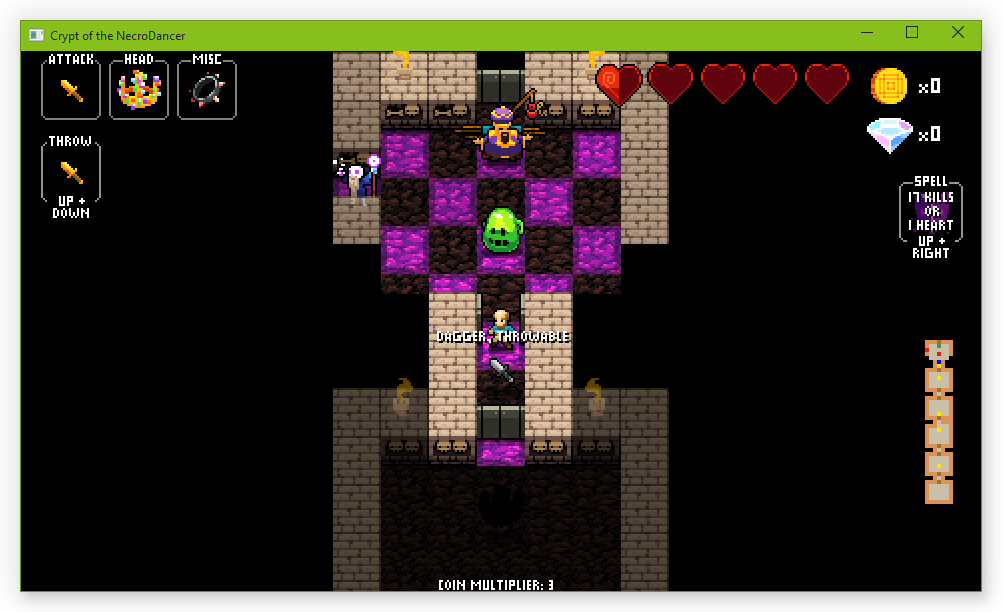 How do you clear this? Why did the game just give me a golden dagger? What does the green slime have to do with anything?

There has been an update, which made a few changes in the last Codex room :

Now, you only have one way to kill the last shopkeeper (sorry Aubergine) :

Aubergine's answer works, but there is a more elegant solution using only the gold dagger. It relies on knowledge of the skeleton mage's wind spell and the gold weapon's ability to one-hit-kill anything if you attack after picking up gold.

When you enter the room, kill the slime. Do not kill the mage or pick up the pile of gold. Your goal is to use the gold to charge the dagger and kill the shopkeeper with that pile of gold. Unfortunately you can't just pick it up and throw- the throw takes two beats so it won't deal full damage.

To do this, you need to make the skeleton mage pull you into the gold on the same turn as you prepare to throw the dagger. The mage will do this if you are two tiles away when he would move. I.e. you need to be on opposite sides of the gold and the skeleton needs to be about to move (glowing staff). 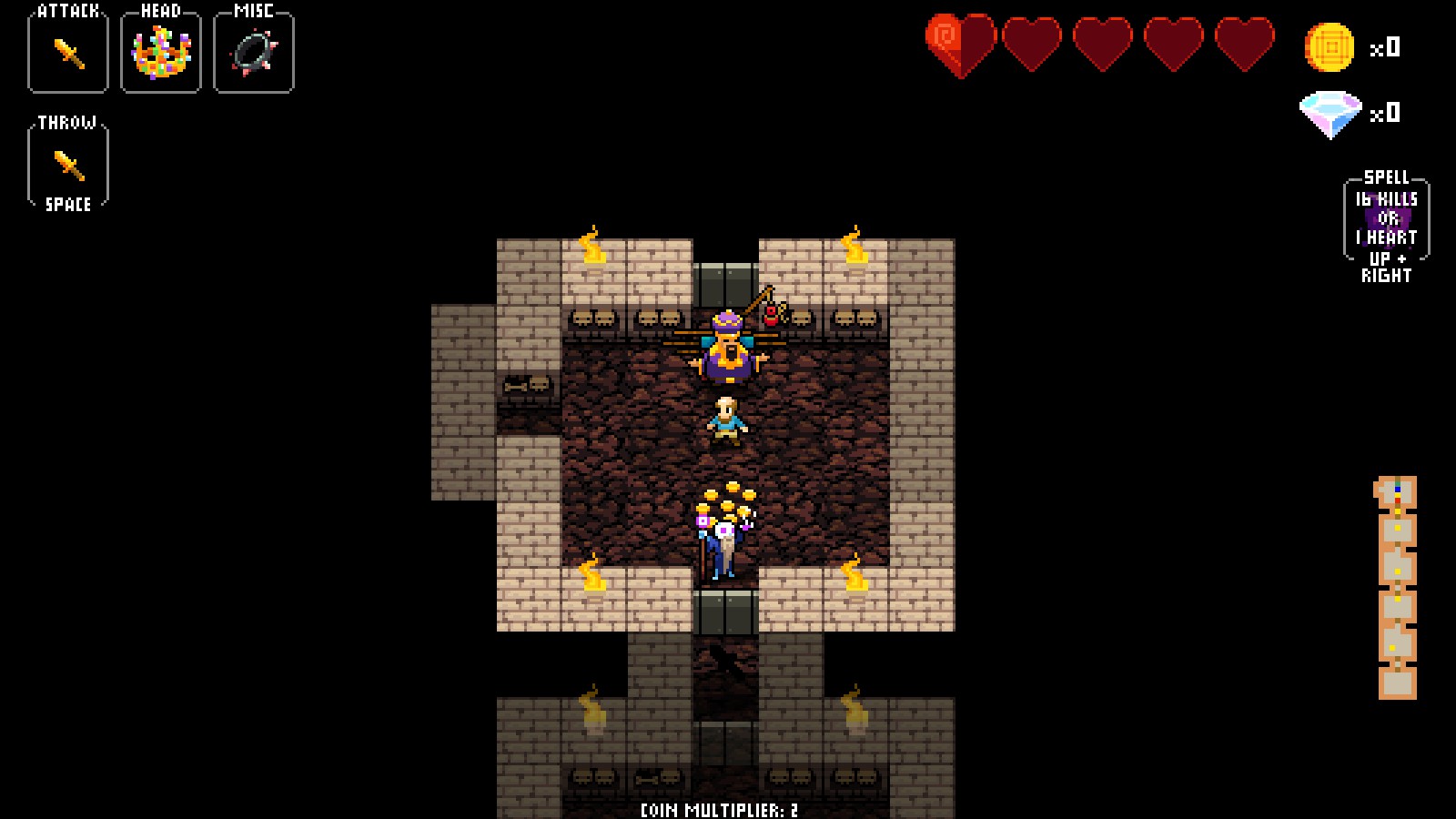 Setting this up is difficult, especially since Bard can't skip turns. He can, however, waste time by trying to dig the walls here (don't worry about losing your combo. If you do things right, get into position and press the throw keys, you'll end up with this: 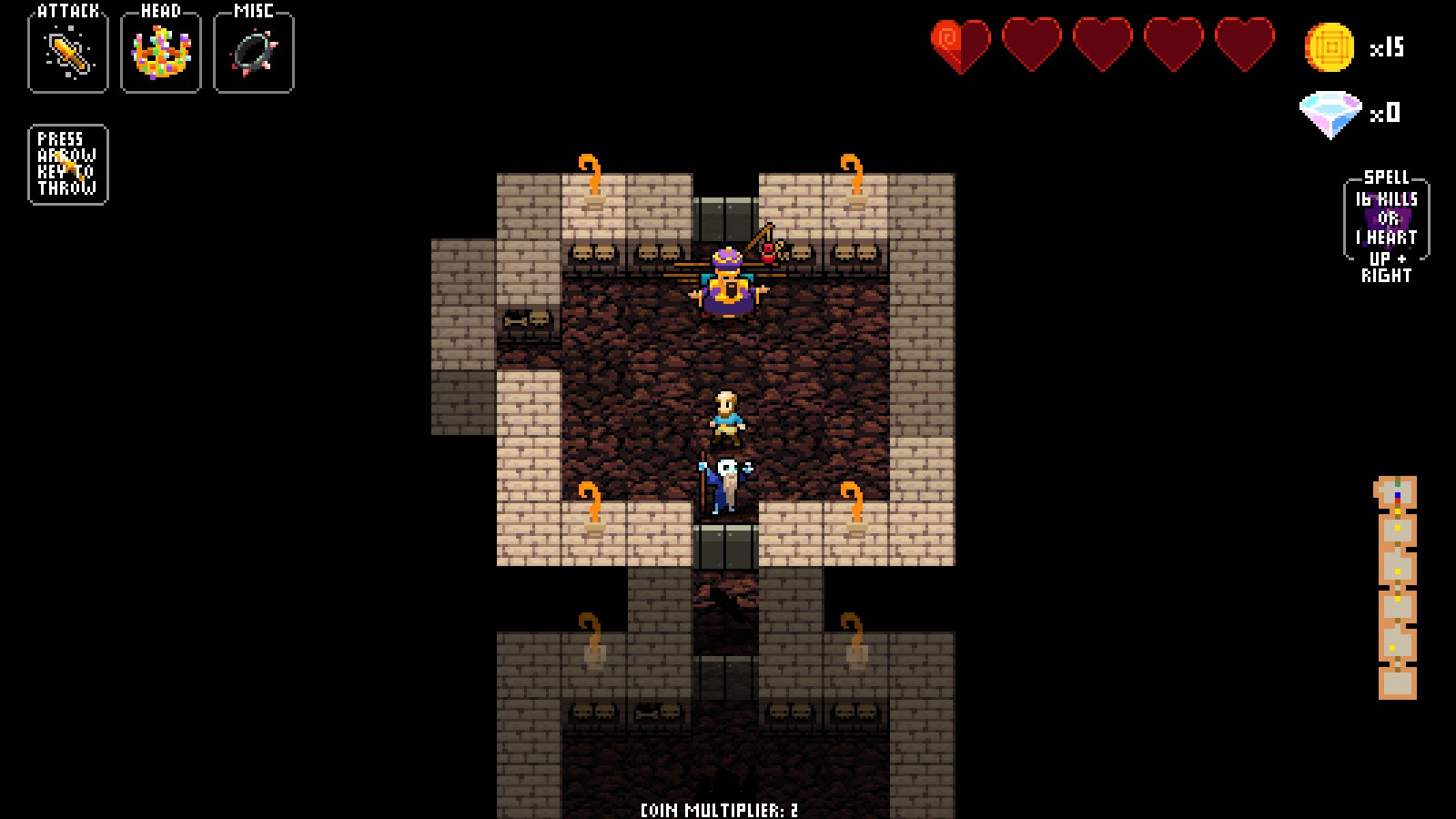 Next move, press up to throw the charged gold dagger and deal 999 damage to the shopkeeper.

Having cleared this last murder, the solution is much less complex than you would expect.

When you picked up the ring of war, you already managed to kill a shopkeeper with just a dagger (albeit the initial damage from the bomb helped). You now have two daggers. Just throw one at the shopkeeper to agro him and then finish him off with the second dagger.

Maybe there is a more elegant solution that relies on gold pickup and makes use of the gold dagger, but this did the trick for me.

As Anton writes it

There has been an update, which made a few changes in the last Codex room :

This means that there's another (kinda cheaty way) to do this level.

First, kill the first shopkeeper. Then follow these steps:

Repeat this I did this all the way to the last shopkeeper.

At the last keeper it's almost impossible to not kill him with all the goodies one has collected but not yet used. one way to do it here is:

Antons way is more fun, and is propably how it was meant to be done, but this is the kind of game where you make your own rules :P

Not the answer you're looking for? Browse other questions tagged crypt-of-the-necrodancer or ask your own question.

6
How can I love gooooooold?
14
How is it possible to get killed by the Green Slime?