How to deal with an offlane Darkseer early game?

My teammate and I were playing Lina (support) and Phantom Assassin together recently, facing a solo Darkseer in his offlane. This is around 3k MMR, so nothing too fancy. We handled it decently, but still had some problems nonetheless. To put it in a picture, we found ourselves often like this: 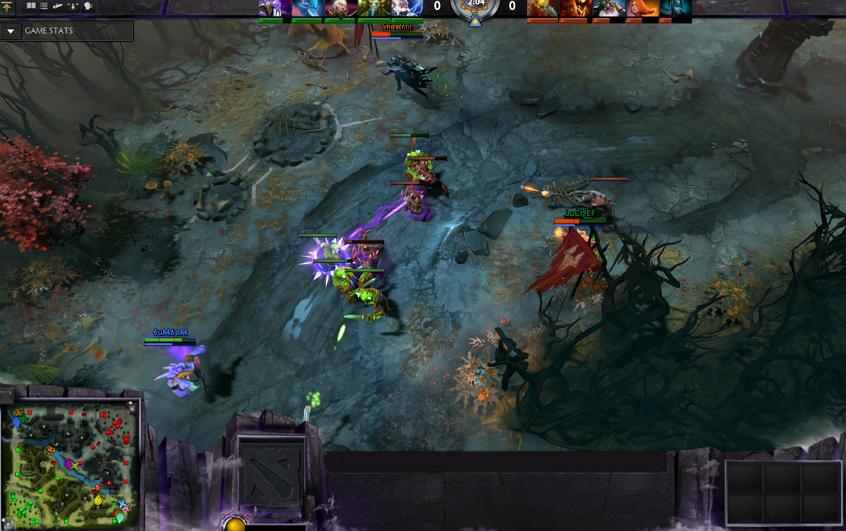 We are both low health from respectively trying to harass Darkseer out of lane, and last hitting / killing the Ion Shell creep (plus in this case a failed kill attempt - we still have some regen available).

It seems pretty tough to control the lane equilibrium vs a Darkseer early game, and many times the lane ended up under our own tower, making last hitting quite hard.

Some things we tried include trying to kill the Ion Shell creep when possible, harassing the Darkseer to low health, and just plainly letting it happen.

Some things I considered playing the Lina was in fact to just leave the lane (or at least go full-time stacking and pulling), as well as going all-out aggressive on Darkseer (it didn't work out for me though).

Note again this was a 3K public match, so things like carefully coordinated rotations weren't really an option.

Further note that I'm not looking for advice on counterpicking (I realize that there may be very specific counterpicks...): I want to know what to do when I end up in this situation. Preferably I'd get advice on how to deal with a Darkseer in his offlane in general (i.e. for the generic "ranged support + melee carry" situation), but if that would make the question unanswerable I'd settle for advice on doing this with Lina and Phantom Assassin.

So, the bottom line: during the early phase of the game, playing as ranged support plus melee carry in your safe lane, what can you do to counter a Darkseer spamming Ion Shell in the laning phase, if anything?

Lina should be able to zone out Dark Seer. Lina has the 2nd highest attack range in the game(after Techies) and she should be standing in the woods/sideshop autoattacking the Dark Seer.

Keep in mind that Dark Seer is arguably the best offlaner atm. He's the tankiest level 1 hero after Spirit Breaker and Ogre Magi (and Medusa with mana shield).

As for Phantom Assassin, I would recommend killing the creep with the ion shell first. She could also go for last hits with dagger. Lina could go for a bottle, to keep Phantom Assassin/ herself safe.

As Phantom Assassin, a battlefury is a common item in general, the component called Ring of health is an amazing item in lane. People sometimes also just buy a Ring of regen vs a dark seer because of the cheap cost.

This means that other heroes can pick them up and benefit from the effect of the item, but cannot sell or upgrade the item.

Which means your support could just buy a ring of health and give it to you for you to use in lane.

Further note that I'm not looking for advice on counterpicking (I realize a support with two reliable stuns would help a lot here...): I want to know what to do when I end up in this situation.

Uhh... that kind of depends on the heroes you end up with. I can't predict the future so I won't know your full array of options. Ranged support and melee carry covers a very wide variety of heroes, the main decider being "does one of you have a reliable stun or silence?"

However, if you can't farm consistently in your lane as a melee carry, your objective is pretty much always the same: build enough items to farm jungle only, and then do that instead. In PA's case, probably just rush Morbid Mask and get a Stout Shield if you don't already have it. You can lifesteal off of jungle camps, which do less damage than the ion shell, then return to lane to farm a couple of waves when your life is full, then return to jungle when your health gets lower again, etc. Your Lina should be able to hold the lane by herself fine against a solo Dark Seer. This is good for Lina, because if she can use the gold she gains to buy a Eul's Scepter, then you can get kills on Dark Seer when he tries to push the lane again. He can still put ion shells on incoming creep, but you will be able to zone him out of XP range.

Another thing you can do is have Lina fight elsewhere on the map, always when you have greater numbers in the fight. This will prompt their team to either lose the fight, or group up as 5, and if Dark Seer leaves his lane then PA can free farm for a few waves. This sounds like it requires coordination, but if you buy a smoke and ping it enough times in woods near their lane people will eventually get the idea.

Well, it's surprise to me, but noone reminded that you can go on Iron Talon if you see Dark Seer in pick - it's good item on farming jungle, but it's good to kill ion shell creeps effectively. I agree with others about regeneration problem - so here the dilemma how sure you are about your health. Currently, it's ok to buy Vanguard on many carrys and do not force Battle Fury (example: Antimage). So you might start with items like Tangos, Healing Salve (to regenerate after first two packs), Ring of Protection and Recipe for Talon. Notice: you don't need Talon on first level - creep wave will be with two Ion Shells, so it doesn't do the thing. Than you can buy Stout Shield and carry another Salve to yourself. In this build up there is only one problem - it's last hitting first two-three waves. You need to practice last hitting in lobby agains Dark Seer, and you will see that's after 4 lvl you are ok with it.

18
How to counter Anti-Mage late game?
7
How much data does a game use?
3
How do you harass early game as Warlock
10
How do I Jungle with Nature's Prophet?
3
How do I jungle with Ursa?
4
How do I counter Abaddon late game?
12
What are support duties in LoL compared to DotA?
3
How to view teammates' profiles before game starts?