How to deal with mission 50 in MGSV?

I'm struggling with MGSV's mission 50, Sahelanthropus [EX], I'm currently rolling out with D-walker with level 2 Machine gun attatchment, and 2 star battle-dress. Working on upgrading these to better levels, but movewise, Sahel is always getting the better of me. Any tips to getting past this?

My personal tactic was high level equipment (started playing at launch, and without update, beaten the game still without new weapons from update).

Use the highest damage Rocket Launcher you have, alongside the highest DPS Grenade Launcher you can find. If you don't have a good grenade launcher, the Serval will do, but you will need to replace his scope for something close range.

As secondary weapon, use either a really high damage pistol (ex: Tornado), or a piercing one (some upgrade of the AMD114).

I reccommend taking D-Horse instead, you will have to move really often during the fight, and D-Walker is not as agile nor fast, and his weapons are limited and not really useful. Even his rocket launcher is not that useful.

Your goal is to have high damage primary weapons to damage Sahelantropus, a secondary weapon able to do heavy damage to Psycho Mantis and take care of the bots or rocks, and move fast around the battlefield to escape.

At first, aim for all the fuel reserve of Sahelantropus, preferably with the Rocket Launcher.

Once all the fuel reserve are out, aim for the head, but you should play safe: prefer to hit him on the body than miss while aiming the head. Use every explosives you have.

Depending of your grenade launcher, you should take around the same time to empty your ammunition on Sahel than Mother Base will take to send ammunition, so call them once you don't have any rocket left.

Play safe! Your helicopter will take some of the heat for you, don't worry about him getting destroyed, just call another after that. Dont get too close to Sahelantropus, his flame thrower are a PITA if you don't see them coming.

Try to get a feel of where Sahel consider you are in "close range", you can often force him to use his flame thrower and run when you see him preparing a attack you hate. But his long range attacks are often far safer.

Learn his attack, they all come after a long time where Sahel is preparing, so you can see them coming easily.
Also, at the exception of the Railgun and the Flaming Sword, all are evadable by running away.

The Flame Sword in the ground attack was the worst for me, because the difference between the "line of rock" and the "trapped in a circle of rock" is hard to identify. Your gun need to be able to quickly allow you to escape the circle.

The Railgun pose problem to a lot of player because of it's high damage, but there is a nice safe spot behind one of the rocks.

Since the emplacement is hard to identify, here is a screenshot: 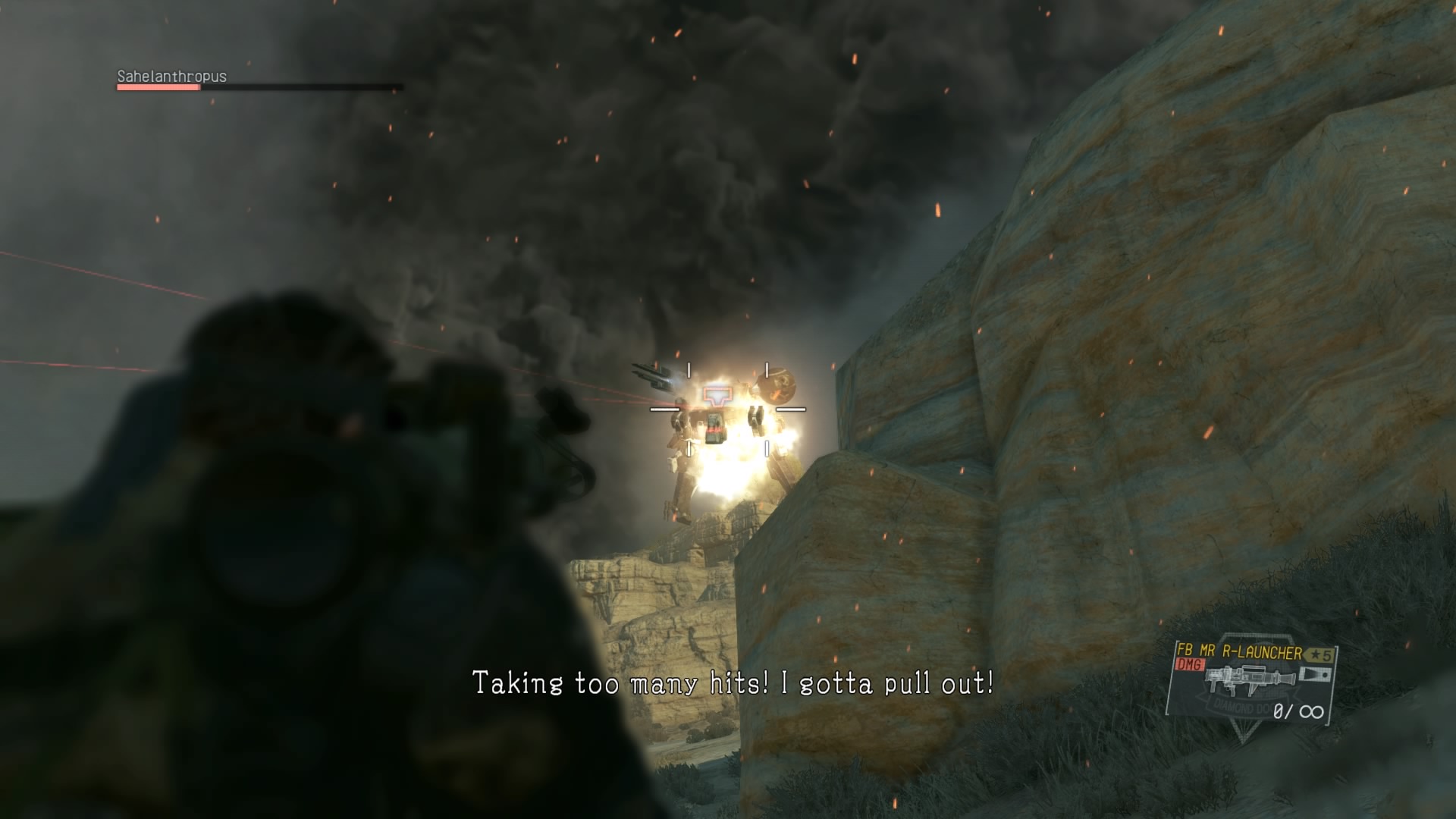 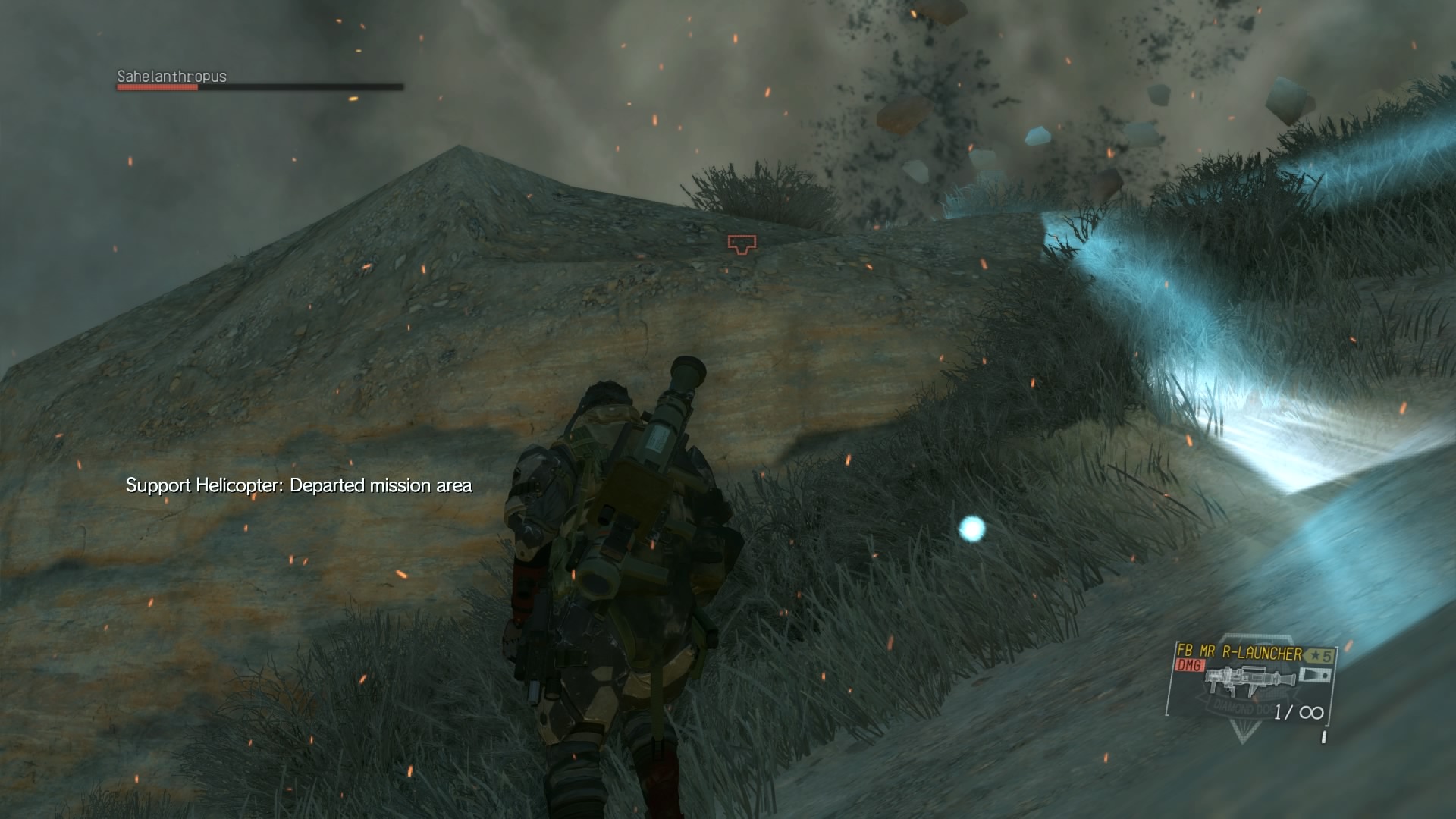 If someone can describe where the place is without screenshot, feel free to edit

This spot is also really useful as long as Sahel is not on top or too close of it.

The AI pods are destroyed easily with a good gun, or escapable by running.

When he jump at you and Psycho Mantis appear, it is your chance to do high damage, you have the time for a nice headshot, and switching weapons. Take the GL if you can escape the blast, your sniper rifle or the gun, and put one between his eyes. After that, you often have the time to empty a clip of GL and fire a rocket on Sahel before running.
Careful, if you were to miss Psycho Mantis (happened to me while taking the screenshot, falled from a high and couldn't find him in time), Sahel will fire his railgun near point blank. It is a assured death, so if you are not confident in your aim, don't aim for the head, and if you miss, RUN

The tactics don't change a lot between the normal and EX fight, the only difference is his life. You can practice on the normal fight to get a good grip on Sahel's moves if you don't feel ready.

Either stay far from Sahelantropus (he move slowly, and his jumps are a chance for high damages), or if you are confident, at the limit of where he think of you as a target for his flame thrower.

Rocket Launcher, Grenade Launcher/Serval, and AMD114 piercing/Tornado is the equipment I reccommend, along all the health restoring item you can carry.

Call Mother Base for ammunition before having none left, make them send heli after heli if needed.

Be patient and safe, the fight is really more a endurance exercise than a damage sprint. 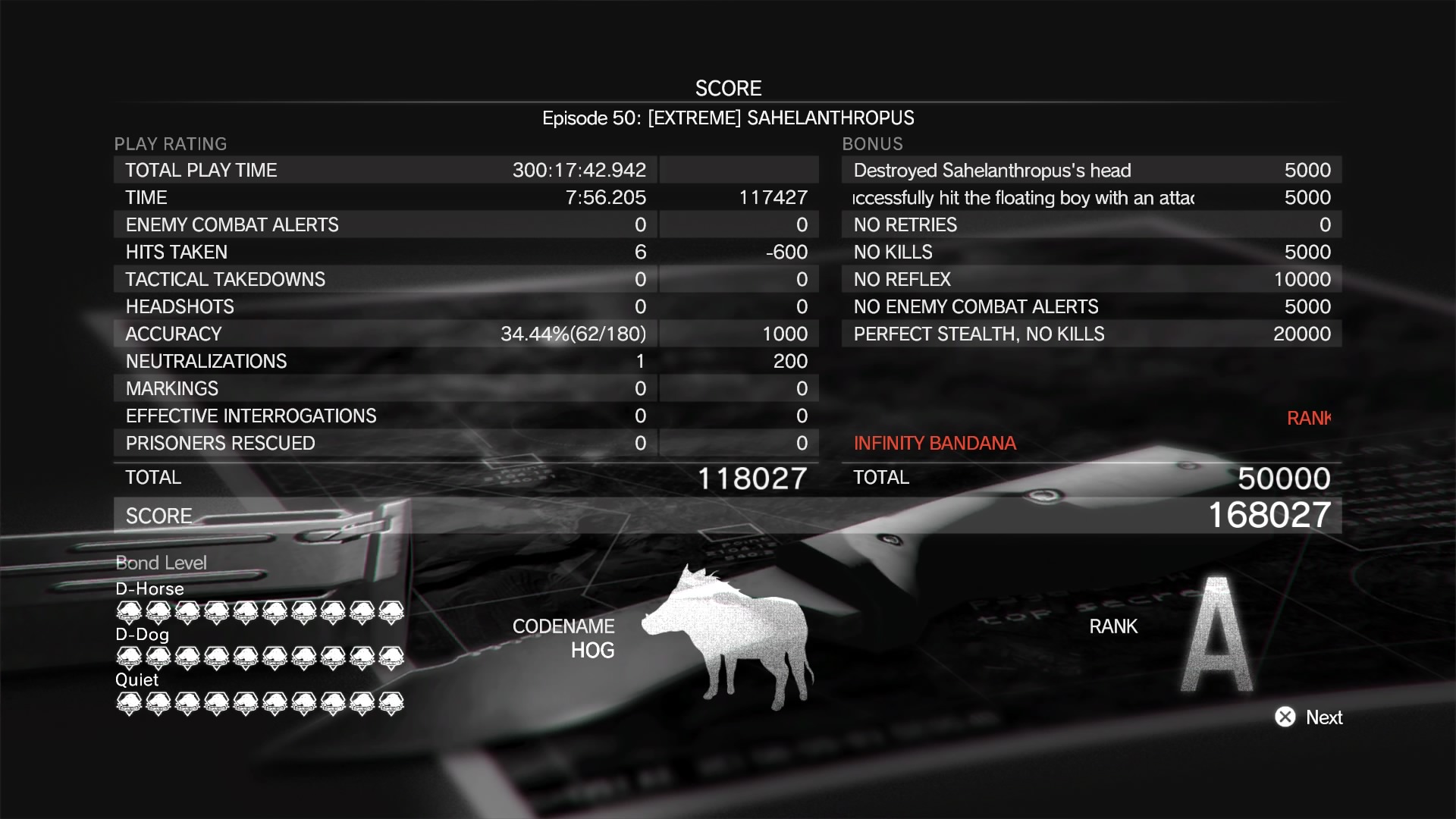 1
How to get the cutscene where motherbase staff fights each other in MGSV?
3
How to extract the containers in Mission 21 War Economy?
10
How do you access Mission 46?
7
Can I opt out of the MGSV multiplayer base invasions?
2
Replaying Mission 45 [MGSV SPOILERS]
3
How to swap a specific weapon for a new weapon during a supply drop in MGSV: TPP
5
Which weapons can take out guards in riot suits with helmets in one shot?
1
How to S Rank Mission 48
3
Is it possible to get perfect stealth in MGSV if an enemy spots you?