What is the fastest way to start a forest fire?

Trees are the bane of my existence. They get between me and my resources that someone put in the ground. There are two ways to remove trees quickly and gain access to the minerals that feed rocket launches:

Note that I said "quickly," so chopping them down does not make the list.

For a large, dense forest, nothing beats the good old flame thrower followed by a deconstruction blueprint to remove the burnt-out husks. However, it can take some time. Experimentation has shown that removing a lot of trees quickly is not as simple as a quick spurt of liquid fire:

I have not been able to find any clear explanation for how fire interacts with trees: how exactly does tree density affect spreading of the fire? How does the amount of fuel or time spent burning affect the propensity for a fire to spread? Does it matter if I ignite multiple trees in different locations, or will a single fire spread and consume the whole forest just as quickly?

What is the most efficient method, expressed in terms of time spent, for ensuring that a forest fire spreads quickly and burns out as many trees as possible in as little time as possible?

Note: while I acknowledge other methods of tree removal and linked to another question about the same topic, this question is specifically scoped to burning trees quickly. Nukes are fun, and there are other weapons that work. However, I want to use my trusty flame thrower... of arboreal justice.

So you seem have to have a few questions, but for the most part, you want to know how to burn trees down quickly. My answer to that, is to use the tank's flame thrower (added in 0.15). This is by far the fastest way to destroy a tree using fire, and what is nice about it is it completely destroys the tree, instead of leaving behind a potential burnt tree carcass. Here is a GIF illustrating the speed of it:

Note that this was with Flamethrower Damage at level 7. A lower level in this technology will make this process slower, but it's actually not by a whole lot. This isn't too difficult of a science to research anyway, so you may want to invest in it if you haven't already for at least a few levels. I found that this method is by far the fastest way to remove trees. If you find a real dense forest that you need to remove, driving through it with your tank and using the flamethrower in a sweeping motion works wonders.

As for using the regular flamethrower on foot, this method is far slower, but allows you to "AFK" remove trees by taking advantage of the burning fires. The downside to this, is it leaves behind some dead tree carcasses. Another downside is if you have aliens in your world, the fire could spread to one of their bases, and they will come after you for attacking them. In my experimentation, I found that the maximum distance apart that trees can be in order to spread fire was... this (sorry, I don't know how to put it into actual length terms): 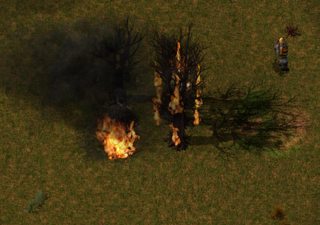 If I had to estimate, this distance is about two inserters long to give you an idea.

To answer your question of How does the amount of fuel or time spent burning affect the propensity for a fire to spread, I think that the amount of fuel used does not impact the spread of fire. Spreading fire seems to go on indefinitely so long as the tree density is high enough to support it. I tested this by making a very large and dense forest in the map editor and then ignited it at just one spot. The entire forest was burned down after some time.

To answer your question of Does it matter if I ignite multiple trees in different locations, or will a single fire spread and consume the whole forest just as quickly, I would say that burning multiple trees in different locations would remove the forest faster. This is because if you start one fire on one end of a forest, and one fire on the other end, you effectively double the rate at which the trees are burned. Eventually, the two fires will meet up (so long as tree density allows for it).

21
Is there a way to remove a lot of trees efficiently?

10
Is there a simpler way to ensure that two inserters always fire at the same time?
18
Is there a way to queue items to the front of the crafting queue?
17
What is the benefit of storing water in tank?
9
What is the best way to mass produce science modules in Factorio?
3
What happens if I deactivate RSO after the map is generated?
3
What will I need to do before building the rocket silo?
13
What is the point of trains?
8
What does the purple progress bar mean for electric drills?
3
Is there a way I can stop Ammo from auto-stacking with what I have equipped when I craft it?
5
What is the best way to collect active bots for upgrading?