Richness value on Enemy base

In the Create new World settings tab, you can change the richness of the enemy base.

I know that we had alien science pack in early builds of the game.
But does changing the richness of enemy bases affects the gameplay/enemies on the current (0.15.34, as of this post's date) build of the game?
If yes, what does it affect? 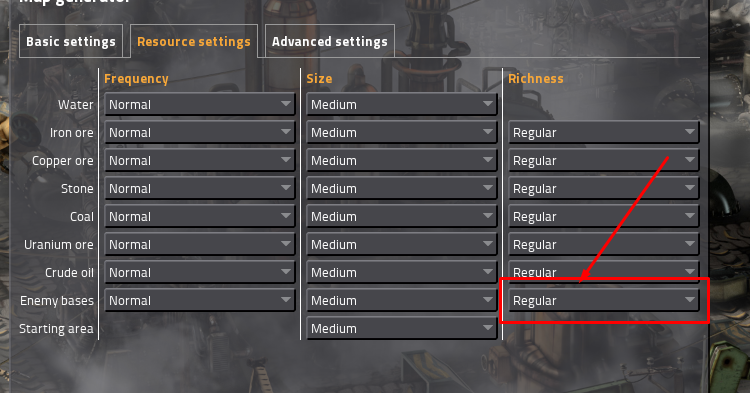 I want to say that this does not affect anything nor if it ever did. I've tested to see if it had to do with how many enemies spawn, but that doesn't seem to be the case. I ran a game with this set on "Very Good" and then again on "Very Poor" and both times the amount of enemies didn't seem to be any different.

I then changed the beta version of my game to 14.23 and tried this again, but this time testing for how much alien artifacts I got from destroying a base. Again, there didn't appear to be a difference in the amount of artifacts I received after destroying a base (the amount dropped wasn't consistently "very rich" or "very poor").

Digging through the game files of the game (the current version), I wasn't able to find anything that used the richness value of the enemy bases. I even went and scanned the older versions files and still found nothing.

One post on the Factorio Forums from four years ago asked this question, to which users responded with different answers. They range from changing the amount of alien artifacts received, the number of enemies, and the density of the spawners in a base. All of this I disagree with, leading me to believe that this option doesn't affect anything.

10
How can I encourage alien expansions?
4
Leaving my base, is there any chance that it might be attacked?
9
Disable enemy attacks in Factorio
8
Why do Biter Spawners appear inside my base in Factorio?