How much splash range does the RPG have in Fortnite?

Sometimes I feel like I am super far away from the RPG blast but still get hit. What range would I have to be, away from the explosion, to take 0 damage?

The RPG has a one-square damage range. When you build 4 walls around you, the space in between is called a square, which there are thousands of on the map. If someone shoots an RPG and it lands exactly a square away from you, it will deal damage - but if you moved a tiny bit back before, you would be alive. The same applies to grenades, boogie bombs, smoke grenades and impulse grenades. If the RPG hits in the corner of one square, like in the diagram below, it will damage 4 different squares. 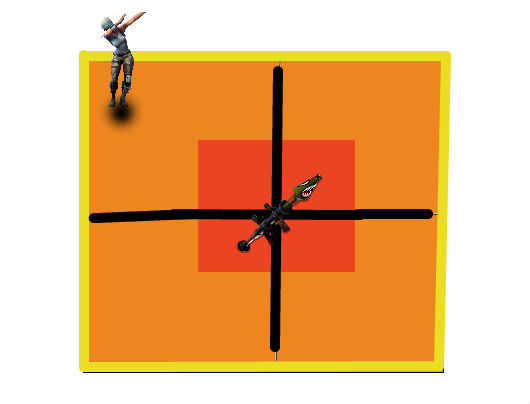 As you can see, 4 squares around the blast are affected, and if you are a square away from the blast you may still get fairly high damage, leading you to die.

Not the answer you're looking for? Browse other questions tagged fortnite-battle-royale or ask your own question.

17
How to copy Fortnite onto another PC?
5
Dealing with campers in Fortnite
5
How does aim assist work in Fortnite on console?
5
Does the friend XP Boost in Fortnite stack with how many players you have?
12
What counts as outliving another player in Fortnite?
5
Can you have a draw in Fortnite?
1
Do people earn health when they get a kill in the Scavenger Pop Up Cup in Fortnite?
1
Does Fortnite Account Merge Reset Stats?