How much damage does the Assaultron head laser do?

While looking at armor, I attempted to pick out a series of representative weapons and damaging effects that one could encounter out in the wasteland. Deathclaw claw attacks, mininukes, and super-sledges are easily found and calculated, but I can't find the damage value for an Assaultron head laser anywhere. What's the damage value for this weapon? Or is it a true "insta-kill" weapon?

According to the Creation Kit, the unmodified Assaultron Head Laser does 100 base damage of the Energy type: 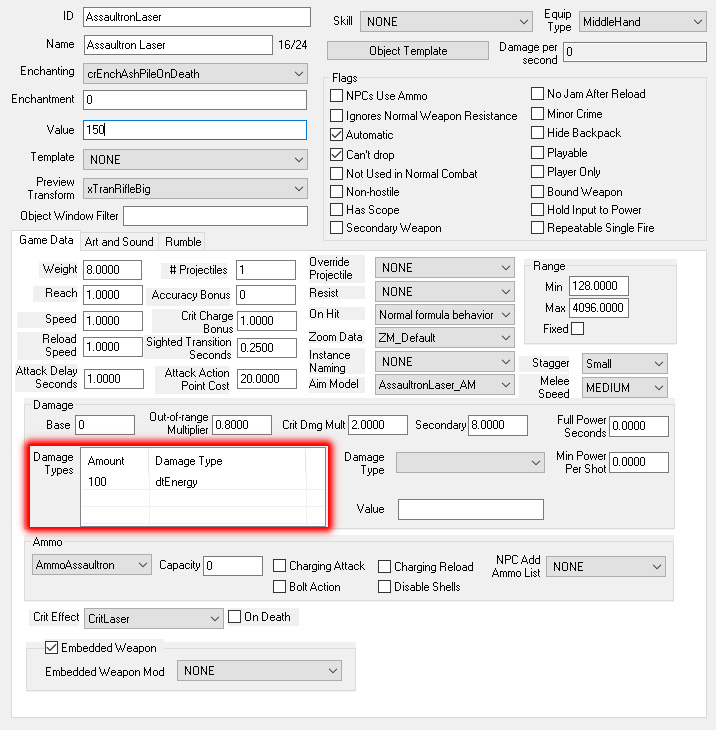 Based on some testing, using my unclothed and static level 63 player character with bare damage reduction (Astoundingly Awesome 3 (-5% DMG from robots), Lone Wanderer 2 (-30% DMG)), I got up to 1550 DMG* from a single shot, translating to +/- 2330 DMG for a single, constant, and full shot, without the damage reduction.

Unlike chargeable weapons that the player can use (e.g. the Gauss Rifle), the Assaultron's head weapon does not have charging information on the Weapon sheet seen above. The charge time of the laser weapon can be found in the AssaultronHeadModScript.psc file: the integer laserChargeTime has a value of 15, which seems to correspond with the time in seconds in-game. As other charging weapons have an exponential increase in DMG as they are charged, I suggest something similar happens here.
Something else to be taken into account, is that the shot itself lasts for a few (around 4) seconds.

According to this article on weapons in the Creation Kit, the Automatic flag ignores the Attack Delay value and calculates based on Speed. Speed for this weapon has a value of 1, which translates to 90 RPM in-game, which is 90 every ten seconds, or 9 Rounds per Second (that is, still, with reservations, and assuming this particular weapon is not (completely) controlled by a script - most values being standard 1 begs to differ).

I did additional tests, with a new Level 1 character without any perks on Normal difficulty.

As a side note, the differences between the values of the first tests - using my Level 63 character - and the ones presented below can be partially explained by the former having been carried out on Hard difficulty (taking the 1550 DMG and subtracting 1/3 (on Hard one takes 1.5x damage) makes for 1033 DMG, resulting in +/- 1410 DMG raw damage. This is still a bit steep, however, so I'll just assume unknown variables account for it - this is no rocket science; this is Rocket 69 science).

Running around in her undergarments, the damage received was:

The 1278 is interesting, as it occurs twice and is also the highest number: I think this could be the actual cap. Or coincidence.

Wearing Military Fatigues and a Green Rag Hat, both using Ballistic Weave Mk V (resulting in Damage Resistance of 220 and Energy Resistance of 235), the damage incurred was as follows:

This disproves the hypothesis proffered in the comments that the Assaultron Laser weapon is "an "automatic" weapon with a damage per shot of 100 and 6 shots per second over four seconds".

Apart from the reservation mentioned before*, the conspicuous and here even greater differences between values can also have been caused by Weapon Spread, since my character's distance to the attacking Assaultron varied a lot during testing. This suspicion is aroused by the laser beam initially always seemingly spiralling for a second or two before it stabilizes. 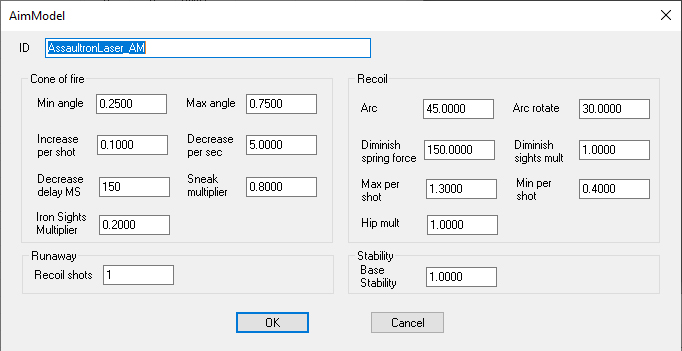 Compared to other weapons found in the game, this is extremely precise, though.

The Range, according to the Weapon sheet, is also seemingly excellent, but as all other usable weapons have these Min and Max values multiplied by an integer in the standard or adjusted weapon barrel mod (an OMOD or Object Mod file with fminrange and fmaxrange values), it's hard to tell what the in-game value really is.

Since the weapon itself is controlled by an AI (both in- and out-of-game) that often has trouble finding her target, values like Range and Weapon Spread ultimately don't matter that much, and we might as well attribute these inconsistent results to the Assaultron AI's lacking tracking algorithms.

Hopefully this long-winded addendum sheds some additional light on the matter.

* The laser attack wasn't a completely direct and constant hit, which accounts for the slightly varying damage received.

2
How does Range affect damage in Fallout 4?

18
How much carry weight does “Pocketed” add?
6
How does damage resistance work?
8
Does hit location matter for damage?
4
Missing fusion cores - how does the Gatling Laser work in regards to fusion cores?
4
How much do mods increase critical damage?
1
Does Cryo damage ignore damage resistance in Fallout 4?
7
Does the Sole Survivor know how much time has elapsed since the kidnapping?
1
How does a Combat Rifle beat a Sniper Rifle? Does the Marksman perk increase sniper rifle damage?
2
How does Range affect damage in Fallout 4?