How do I get to the easternmost Goddess Chest in Skyloft?

According to my map a chest in Skyloft has been unlocked, but I can't get to it. It is on the circled island: 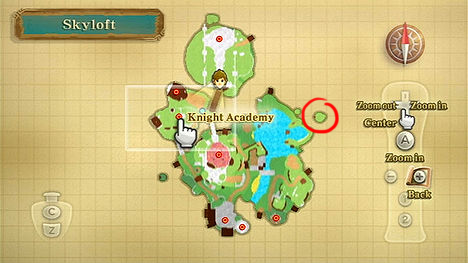 To be able to get the chest that shows at the circled location, you'll need the Clawshots. Head toward the entrance of the Waterfall Cave. To your left, you should see a floating island just above you with some vines hanging on the side. Use the Clawshots on the vines to grab it and climb up on. Keep climbing until you reach the highest point, the island with the waterfall. You can reach the chest then by jumping to the island that has it.

That tiny island is part of Skyloft, and the dismounting of Loftwings works differently there than in the rest of the sky. Trying to zoom over it and diving exactly on it will always result in you landing on the side of the lake.

I have not reached that part of the game yet, but it would seem it's the island that's a good bit high. Since there are vines coming down from it, I would think that it would be possible to clawshot the vine and be pulled up there as it was possible in Twilight Princess. I however don't know if it's possible in this game, nor when exactly you get the clawshots, but my guess is that is the way to glory.

You will need the Clawshots to get the chest. They will be given to you as the Lanayru Silent Realm gift ;)

8
How do I open the mystery chest in the Bazaar?
11
What's the best place to get Monster Claws early in the game?
8
Where can I obtain the Bomb Bag?
13
How do I get to Beedle's island at night?
12
How do I get into the locked bath at night?
6
How do I get the bug net?
1
What is the nest thing on top of the windmill-like house in Skyloft?
4
Where is my Goddess Chest from the Goddess Cube in the volcano?
3
How can I open the Fire Sanctuary Basement Floor Treasure Chest?
4
How do I get to the Big Chest in the Sandship?