What is the optimal 'loadout' for Lydia?

I'm aware that Lydia's preferred loadout is Heavy Armor and a One Handed Weapon with a Shield.

I didn't know this when I first got Lydia, and somehow managed to equip her with a two-handed weapon and have only given her this type of weapon since then.

Lydia is currently PWNING FACE with her Two-Handed Ebony Waraxe. Would she PWN MORE FACE if I equipped her with an Ebony Shield and One handed Ebony Sword?

Lydia initial skills are as follows:

You can get your followers current skill, though I'm not sure if they are upgraded, using Ask Follower Skills mod by melbourne47. The layout in my screen seems to be broken but it looks like this: 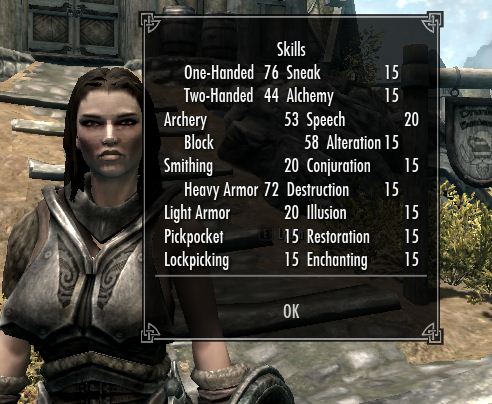 The optimal loadout for Lydia at the beginning is the set you suggested but it might be different if she's been using Two-Handed for a while.

The basic rule of thumb is that two-handed weapons sacrifice defense for the sake of doing more damage. Companions tend to use shield properly as well, so adding a shield will generally increase their survivability.

That said, Lydia has higher stats in shield/one-hand, so a companion that is better in two-handed would be better if you want two-handed and someone like Lydia for shield/onehand.

As of patch 1.6, followers level with you. Lydia's cap is 50, giving her 671 health, 50 magicka and 214 stamina. At that point she has 100 skill in 1H, block and heavy armor with 98? in archery. If you give her legendary heavy armor(helps if you've made a good set of smithing gear and strong smithing potions) enchanted with magic and elemental resists, she can be armor capped and nearly immune to most magical attacks. With a highly smithed sword she should have much higher DPS compared to a similarly well smithed Battleaxe(best combo of damage and speed for a 2H weapon but still much slower than a 1H sword). Don't bother enchanting her shield as she will fail to regain the enchantment effects when switching back from using a bow. She will equip the sword first which auto equips the shield. The shield needs to be equipped on purpose for the enchant to work. You can witness this behavior on your own character. You could manually swap it for her by taking it away and giving it back, but that's a pain and you can't do it while she's in combat mode. Focus on her boots, necklace and ring for resistances. She is a nord so factor that in. You can also use 2 different strength resist magic enchants if you disenchant the shield of solitude and another item with the standard magic resist enchant(standard base is 8, SoS base is 10 leading to totals of 20 and 25 with 100 skill and perks. Can be as high as 28 and 35 with 100 alchemy and perks plus black book Sallow Regent and Relics of Ahzidal from the Dragonborn DLC. This also makes 66% elemental resists). You can use sallow regent and the quest reward Ancient knowledge to make her armor and weapons as strong as possible. She can get a displayed armor rating above the armor cap without a shield or a helmet(I give her a waterbreathing circlet).

20
Do followers have skill levels and level similar to my characters?

27
My housecarls won't stay dressed!
8
Why does Lydia's Weapon glow?
8
Would I take friendly fire damage if I had a mage as companion?
5
Help! Where's my face?
0
In Skyrim Lydia's starting gear is gone
6
Can i get Lydia to only use her bow?
4
How do I completely reset an NPC?
4
Lydia refuses to wear better heavy armor