I am playing a lot of Temple Run 2, but one thing is bothering me about the game. The following picture is a screenshot of my objectives and my "Midas Touch" green progress bar isn't filling up at all! But my Gold Miner is almost finished (I have about 400,000 coins). 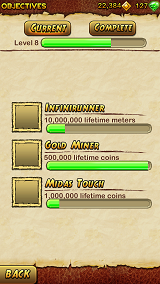 Could this be a bug? One thing I've been wondering about is I heavily rely on the "Coin" Powerup, do coins earned by the powerup count towards these objectives?

I was frustrated with the same issue. I believe that the lifetime coins challenges do not start counting until after the objective is activated (which could be a bug). You probably activated Gold Miner first, collected nearly 400k coins, and then completed a separate challenge that then activated Midas Touch. From that point all coins collected applied to both Midas Touch and Gold Miner, but because Gold Miner was open first, it has more progress. And, of course, the Midas Touch progress bar is going to fill half as fast as Gold Miner's.

I actually stopped playing after I noticed this. Even though they decreased the +2 Gem Powerup to level 9, it will just take too long to complete the lifetime challenges. If it had been counting my true lifetime progress, they would have been completed already.

Not the answer you're looking for? Browse other questions tagged temple-run-2 or ask your own question.