And what about items (e.g. class mods or relics) that increase Fire Rate? Will they also affect normal melee attack speed or the Buzz Axe Rampage skill attack speed (both melee and when the axe is thrown)? 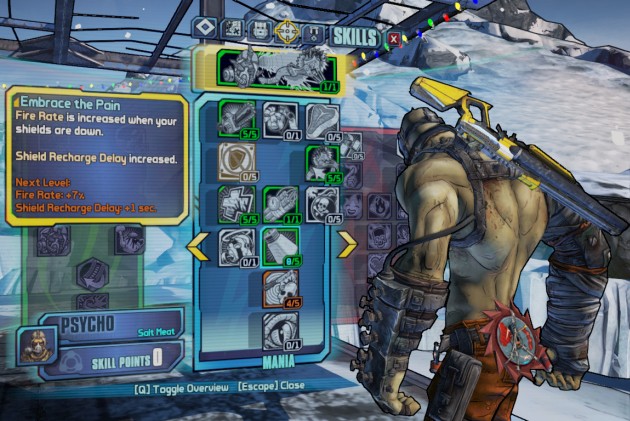 The thrown axe counts as a pistol, so pistol fire rate is what you are looking for. I run with the Sheriff's Badge exclusively now and farmed the 56% one just for this reason. With no Blood Trance I get 16-17 throws up from the normal 11-12. Unfortunately, the pistol damage boost on the Badge doesn't effect the thrown axe :/

While writing this it crossed my mind to test Embrace the Pain, and that does NOT boost the thrown axe. This is an exception, all other general or pistol fire rate increases should work. Elemental Elation DOES work.

I second the answers from others, the primary melee doesn't change in speed.

When throwing the Buzz Axe while Buzz Axe Rampaging, yes, Fire Rate boosts (from items and skills) affect how fast you can throw Buzz Axes.

No - rate of fire buffs do not effect melee attack speed.

Buzz Axe Rampage only effects melee damage and movement speed, as per the tooltips.

The only ability in the game that "in essence" gives you a boost in attack speed is Gaige's "With Claws" ability, as this causes a double attack at the expense of a single stack of anarchy. As both of these melee strikes do full damage and because of the speed at which the attacks occur, this ability essentially give you a 50% increase in melee attack speed for this attack.

It's worth noting that the Mania skill tree doesn't exist with the sole purpose of improving Buzz Axe Rampage - there are many individual skills in the tree that do nothing to your melee damage, for example "Feed the Meat" increases your health and shield recharge speed, "Light the Fuse" replaces the downed mechanic for Krieg, etc.

4
Does throwing Krieg the Psycho's axe when Buzz Axe Rampaging count as melee?

4
Does throwing Krieg the Psycho's axe when Buzz Axe Rampaging count as melee?
1
How does Krieg the Psycho's 'Salt the Wound' skill add stacks?
12
How do the playable characters rank in terms of weight and resistance to knockback attacks?
3
What aspects of Vault Hunters scale with Overpower Levels?