How do I beat medium AI in 5 minutes?

I would like to get 'beat medium AI in 5 minutes' achievement. Usually I am playing as terran.

Is there special SMALL (TINY) map for that? What is strategy for that? Should I build 1st barrack on opponents base? Should I play some special race against another special?

Any thoughts are welcome.

As Terran against Protoss, you can do a fast proxy barracks bunker rush on a small map like Steps Of War.

To begin the game, mine with your SCVs and build one SCV from you command center. Set the rally point of your command center to your opponents base so that the new SCV immediately starts going there. Don't build any more SCVs than this one.

As soon as you have 100 minerals start building a supply depot and shift-click the building SCV so that he also moves to the opponents base as soon as his supply depot is finished.

Around the time you have 150 minerals the first SCV you sent across the map should reach the opponents base. Start building barracks there. Against medium AI you don't even have to hide the barracks, he won't attack with his workers. Once the second SCV reaches his base, build a second barracks with it. 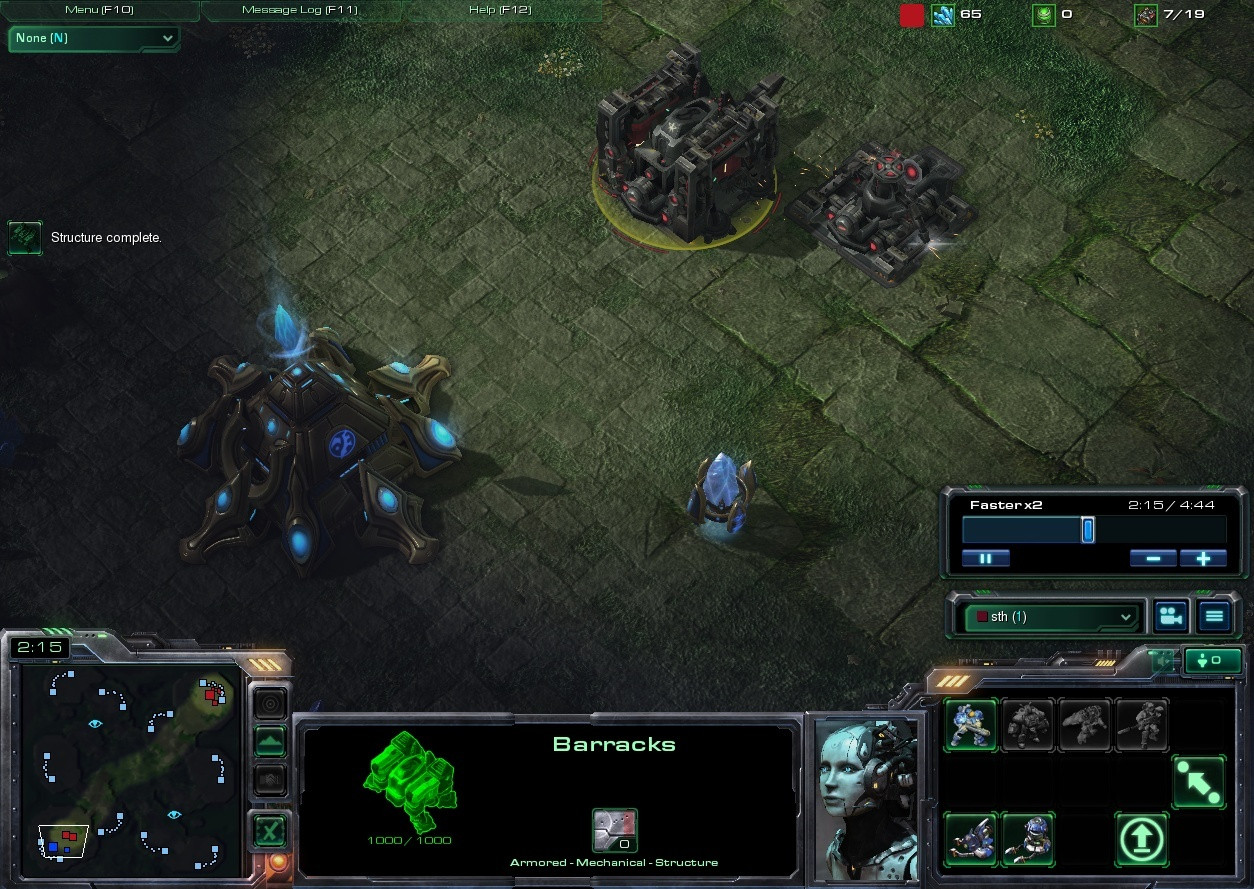 As soon as the first barracks is finished, that SCV should start building a bunker. Put it somewhere close to the mineral line, don't be shy about it: 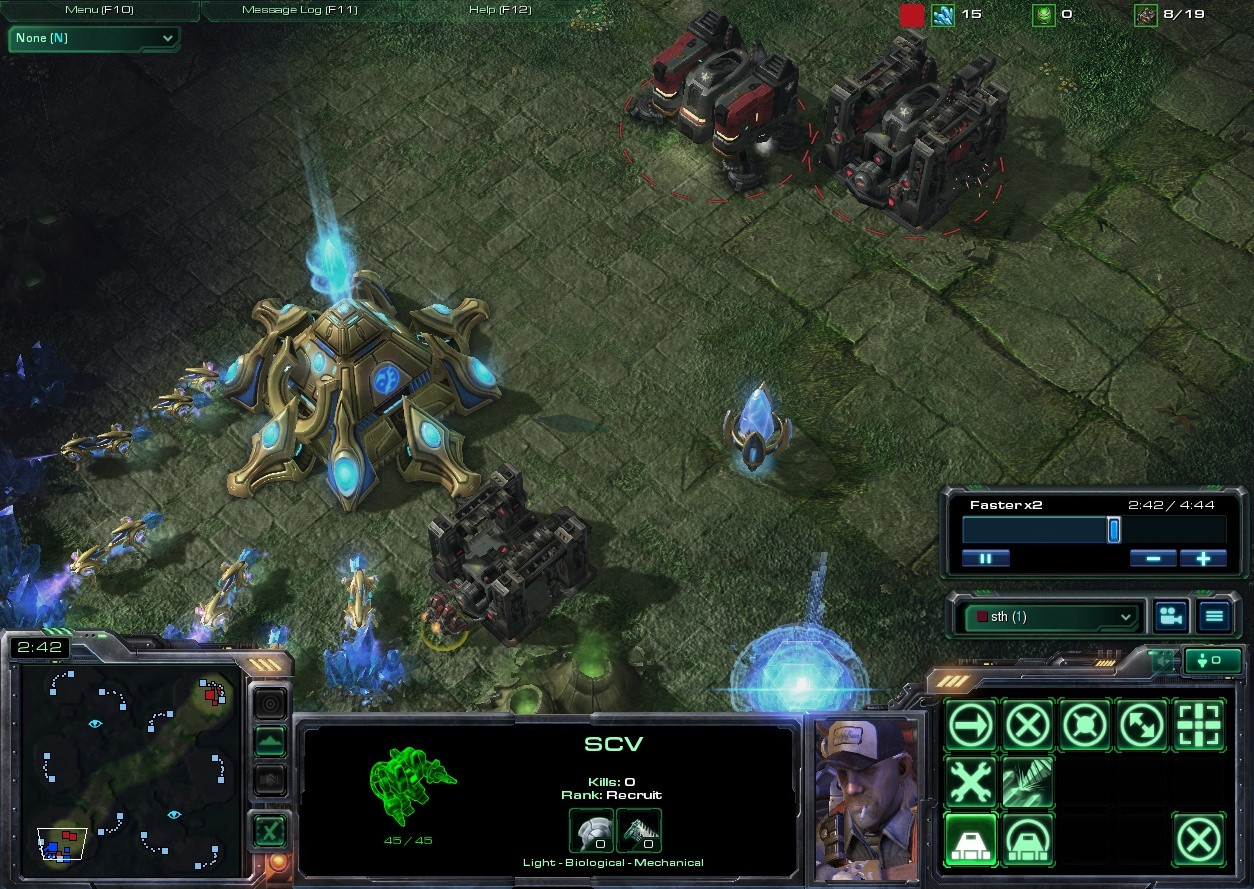 Then put the rally point of your barracks on that bunker and start producing marines as soon as possible. If your bunker gets attacked repair it with you two SCVs and basically just keep producing marines until the computer gives up: 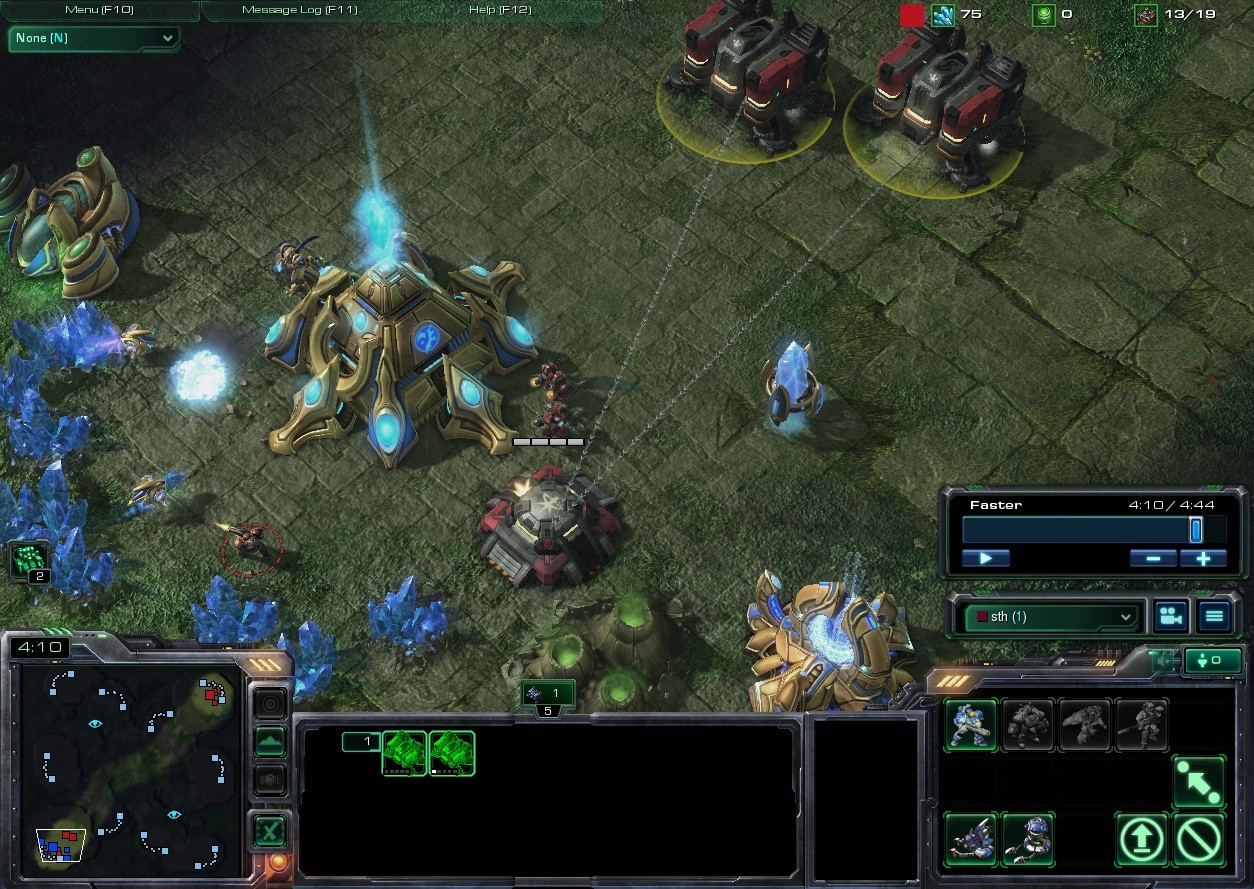 So here was my thoughts when I approached this problem:

In respect to the first thought, shorter maps are definitely better (you were on the right track there), so I chose steps of war. With respect to the second thought I decided to pick a Terran opponent. Marines (the starting Terran unit) benefit a lot more from larger groups than their Zealot and Zergling equivalents so in early game, when we won't have large groups, it makes sense to go for a Terran opponent. 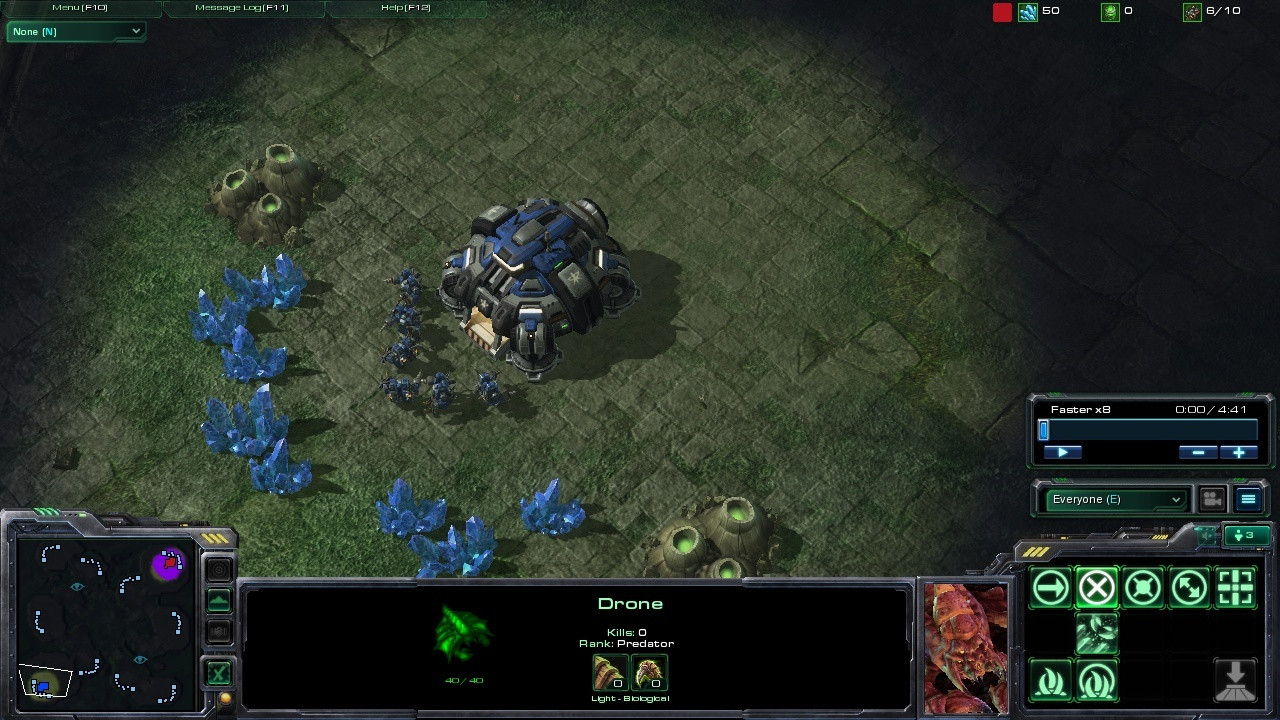 Next I tried to pick a very fast strategy: 8 Pool. I decided on the 8 Pool because I happened to know that you can sustain Zergling production (with a Queen) off of 8 Drones (I don't remember the Zealot equivalent I think its also 8 though). 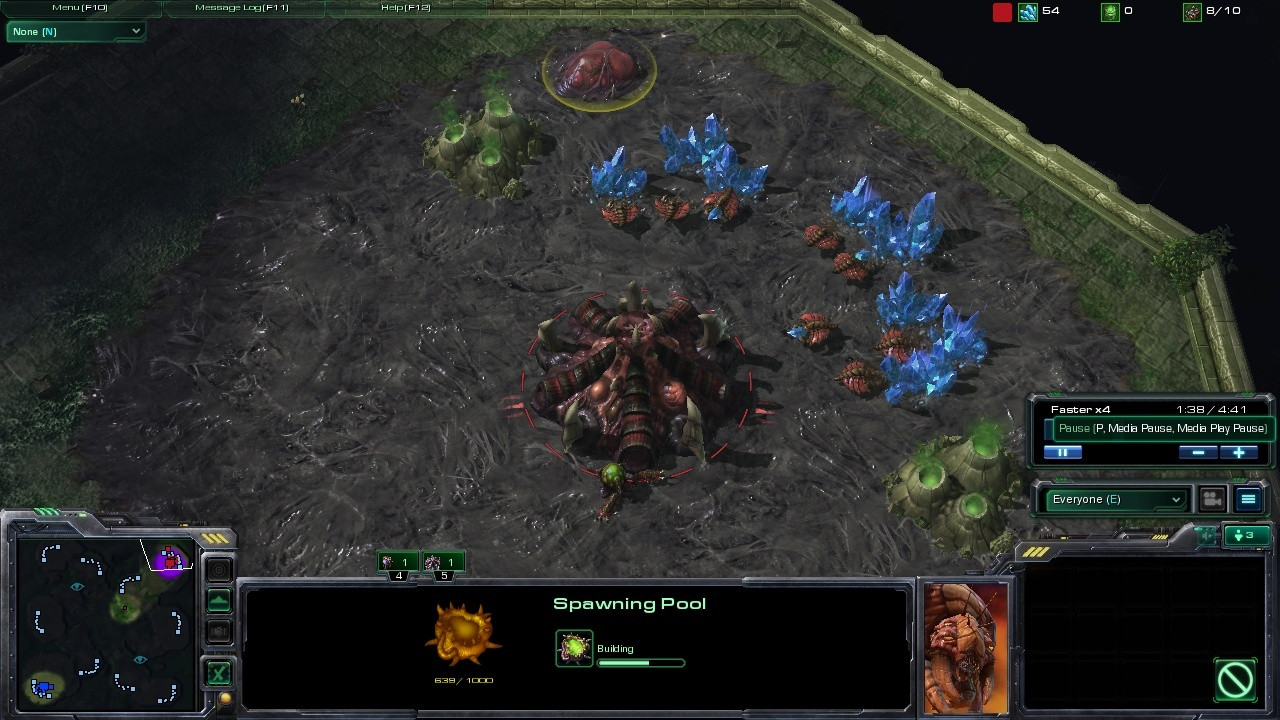 I build 6 initial Zerglings to put some initial pressure (and stop him from building up Marines) and then I go for my Queen/2nd Ovi. The goal of these first 6 Zerglings needs to be something simple (because I still need to Macro) and needs to stop the Terran from mounting a defense. So I'm going to specifically kill the Marines. 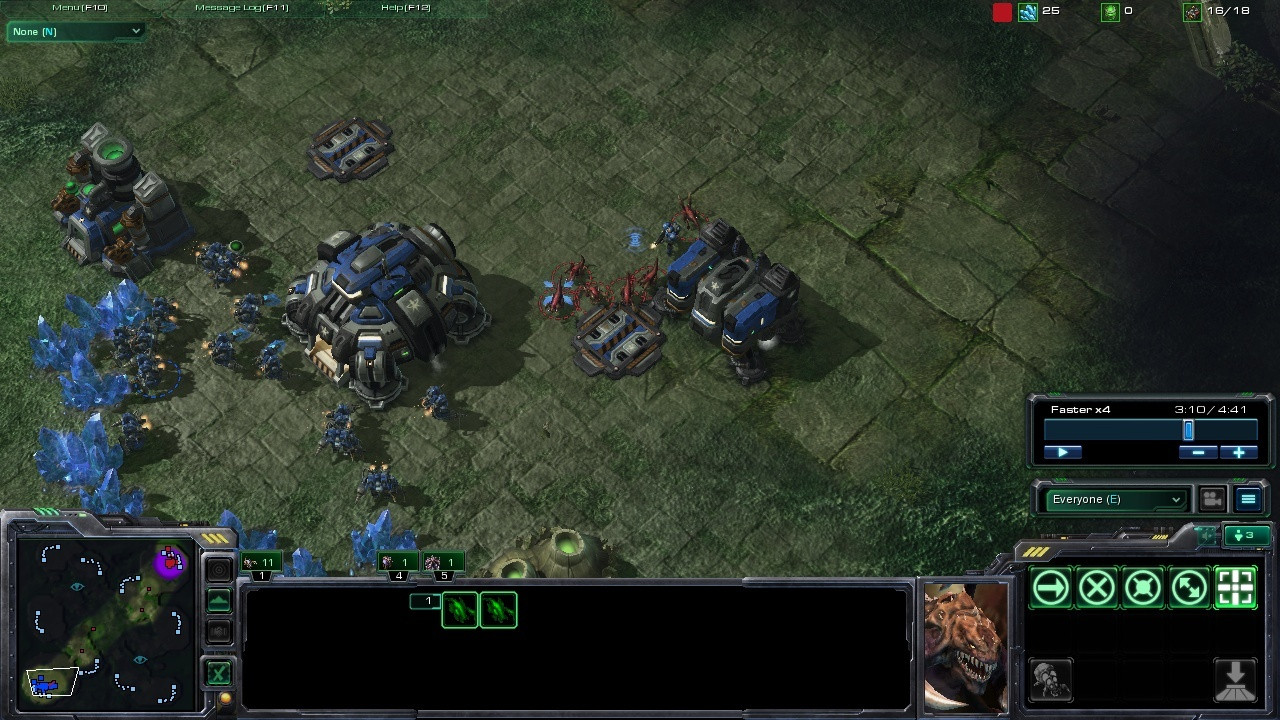 I'm also a pretty good player so I'll even harass the SCVs; however, this is more complicated. I can't let any of my Zerglings die, because I need to build up critical mass and he has enough SCVs to wipe them out, so what I do is a little Brinkmanship, try to lure a few away and kill them off. 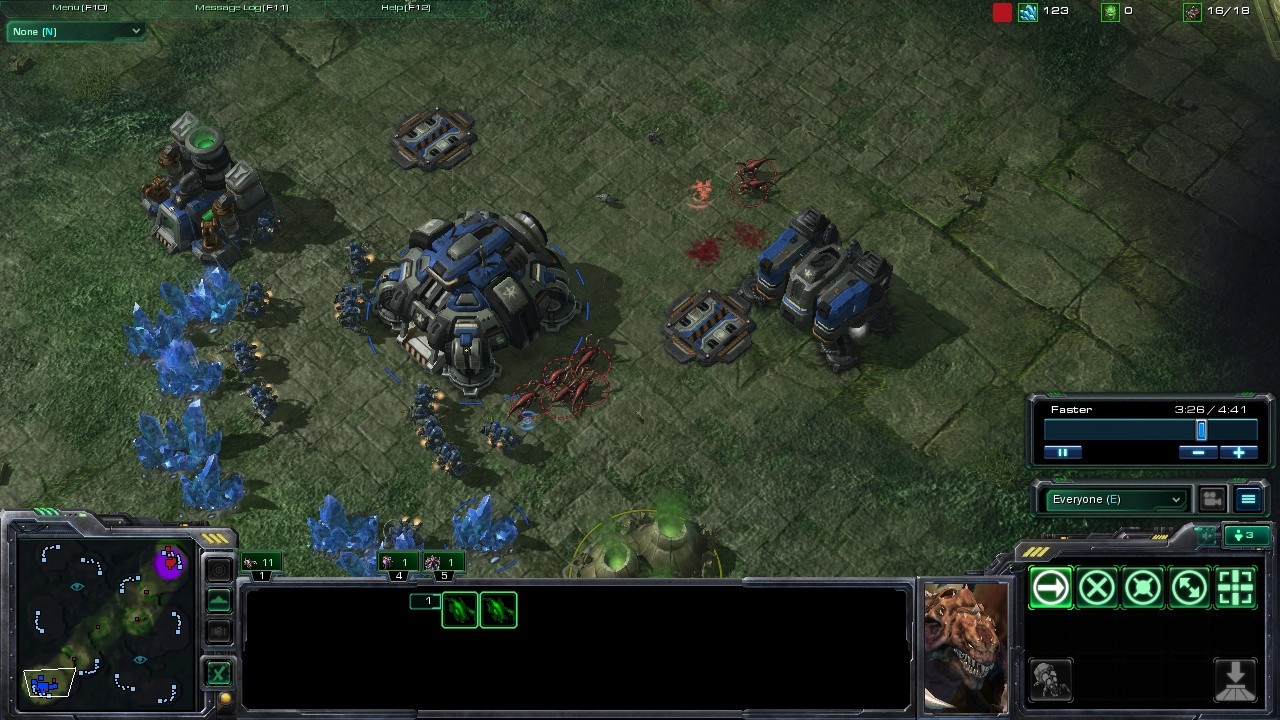 You'll notice my reinforcements are starting to come in, and eventually spawn larva will kick in. As more Zerglings come in, I get progressively more aggressive till, finally, I'm chasing down the few remaining SCVs. After some Magical threshold, the computer GGs. 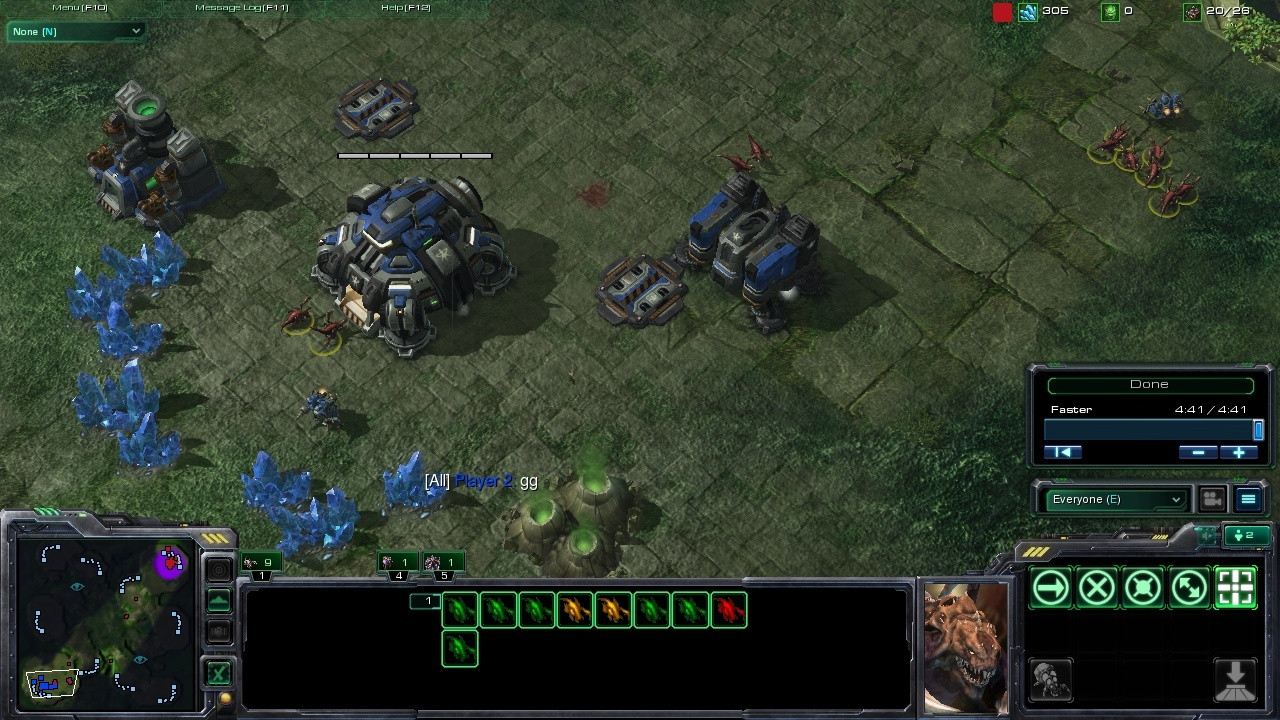 Choose a small 2 player map like Jungle Basin or Steppes of War. Do not choose one of the Novice maps as they block your entrance with destructible rocks.

Once the Spawning Pool is complete, send 2 drones to the enemy base. By the time they get there, you should have 200 minerals saved up. Move them near the hatchery and morph both of them into Spine Crawlers. Get them close enough that they can hit the enemy drones and the Spawning Pool as well. While the Spine Crawlers are morphing in, build 4 Zerglings and set your Hatchery rally point next to your Spine Crawlers. This will be enough of a force for the AI to call "gg" (good game) in less than 5 minutes.

The easy way to defeat the medium AI Medium in under 5 minutes or less (average of 3 minutes):

You can also do this plan against the hard AI, but against the very hard AI, you will need to build outside their sight, or their probe will attack your building.

Here's a replay on how to do it for Insane A.I.

Of course this works for any A.I., but getting it for Insane gets you all the rest.

Not the answer you're looking for? Browse other questions tagged starcraft-2 achievements .

32
Where are the StarCraft 2 replay videos stored and can I share them?
9
How do I beat Insane AI in 5 minutes?

23
How does a Terran player stop a cannon rush from Protoss?
6
2v2: ZP/T vs TT - how to not fall behind
2
When not to zealot rush?
10
Drone Rushes: Counter for each race
9
How do I beat Insane AI in 5 minutes?
1
Should Terran build bunkers after the wall during 2v2?
3
MegaRax vs quick mech in TvT - is it viable?
4
NO ARMY expansion: is this new strategy? Is it viable?