Battlefield framerate: is my CPU or GPU the bottleneck?

UPDATE Just as a follow up, I went from the dual core AMD, to a "quad" core AMD. The quotations marks are there because AMD is a little shady about what they mean with cores. The quad core AMD performed much better and BF3 and 4 became playable, but the FPS still struggled more than I thought it would, but it was playable. I recently said screw it, bought a i7 4790k Devil's Canyon CPU and now things are perfect. I still have a modest Radeon 270 2gb, but the performance is excellent on all high. BF3 and 4 just demand a solid CPU, mine is overkill now, but you must have a true quad core!

Bring down the console with the ~ (tilde) key and type 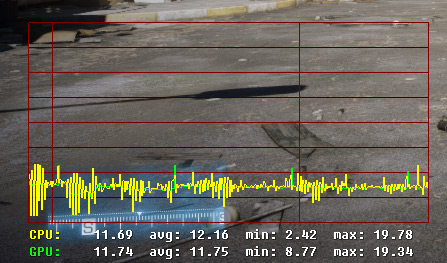 Leave that up while playing. What you're looking for here is spikes that show you what the bottleneck is: CPU (yellow) or GPU (green).

The A4-5300 is a dual-core 3.2Ghz CPU. I wouldn't want to try and run BF3 or 4 on a dual-core chip, a quad core at least. 4GB and GTX 650 should be fine. Have a look at CanIRunIt - systemrequirementslab.com/cyri - and see what it says about your system.

Yes, this sounds very much like the CPU is your culprit. Similar for me (Core 2 Quad 3 GHz). I'm able to pick pretty much any graphics setting on my GTX 680 without significantly influencing my frame rate (except when using oversized rendering like 200%).

Although keep in mind that the current beta is most likely a not optimized debug build; so performance might (and most likely will) still increase quite a bit for the official release.

Not the answer you're looking for? Browse other questions tagged battlefield-3 battlefield-4 or ask your own question.