“Closest Bonuses” on bungie.net for Destiny, what is this?

On the Advisors sub-page on Bungie.net, I can see the following list, under a section called "Closest Bonuses":

Edit The bonuses are attached to an icon signifying a type of mob, edited it into the list below.

What does this signify? What happens when, say, I reach the 775 kills of the first one? Will I get a temporary bonus to glimmer income? Will I get a small item, like the Black Wax Idol?

The bonus to glimmer income increases the amount of glimmer you get when a resource collecting item, like the Idol is active and you kill the appropiate creatures. You can see your bonuses in the Grimiore. 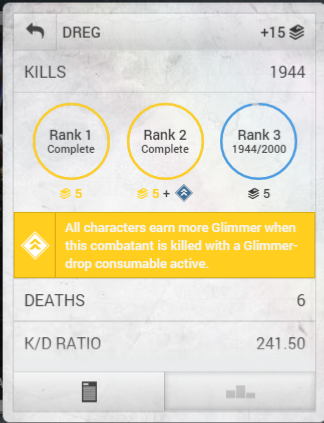 The resource income increases the chances of more than 1 resource out of resource nodes and chests on the planet you have that bonus for.

Just wanted to point out a few changes since Destiny 2.0:

Yellow-bar enemies still have the glimmer-spilling animation, but you don't actually get money for killing them anymore without a glimmer consumable active. Now I just use that animation as a reminder to activate my consumables if I haven't yet ("Hey, look! You're missing out on getting glimmer"). Frustrating, but Guardians adapt to thrive.

Earning glimmer from killing enemies nowadays comes from equipping a Ghost Shell with a perk that can harvest glimmer from kills of a certain race of enemy (Fallen, Taken, Hive, Vex, Cabal) or in PVP against a certain class of guardian (Warlock, Titan, Hunter).

To make up for the lack of glimmer-producing yellow-bar enemies, the patrols' glimmer rewards have been increased, rewarding 250 for simple missions and 500 for VIP missions.