Is it possible to stream audio output from a PC/Mac (I myself use a Mac) to the speaker or headphone jack on a Sony DualShock 4 controller over Bluetooth? I have done some digging around the Web and come up with little to nothing so far, but I would be thrilled if anyone can find a way to do this.

Interestingly, however, when I hold down the PS and Share buttons to pair my DS4 with my Mac, THREE devices appear on the list of available Bluetooth devices in System Preferences (see screenshot). 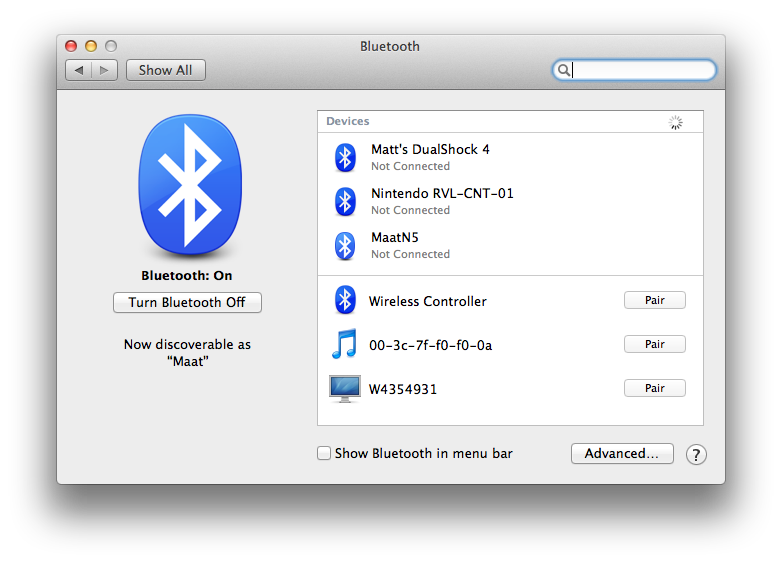 I can pair with the first of the three, called "Wireless Controller" and bearing a standard Bluetooth icon, and use the DS4 as a game controller (albeit with no rumble, no audio input or output of any kind, no LED, and no trackpad) normally. I cannot connect to the second listing at all, but when I try to pair with the third listing, said listing shifts above the gray line dividing paired and unpaired devices and says "Connected" while still displaying the black-and-white loading pinwheel (although nothing else happens during that time period.) After about a minute, the "Connected" message changes to "Pairing Failed" and the loading pinwheel is replaced with a yellow caution sign. Also curiously, each time I try to connect with any one of the three, all three of the "Pair" buttons are grayed out rather than just that one. Once I successfully pair with the "Wireless Controller" listing, the other two disappear.

I have not found a software only fix, but apparently there is now a wireless USB dongle for the DualShock 4, compatible with both PC and Mac. It allows full use of all the DS4's functions on both platforms as far as I know, including the touch pad and the headphone jack.

Not the answer you're looking for? Browse other questions tagged pc controllers macos ps4 audio-hardware or ask your own question.